Why can't I move files from my Ubuntu desktop to other folders?

When I try to move a file on my desktop to a folder (opened using Files), the file will not go into it. If I move it to a folder using the mouse pointer, it moves back to the desktop when I release the mouse button. If I right-click on the file, there is no "Move to" option on the menu. This also applies to external drives (e.g. expansion drive, flash drive stick). I have had this problem for a number of months now.

The reason you cannot drag files is due to limitations in the support of desktop icons. Since a few Ubuntu versions, icons on the desktop are not anymore provided by nautilus file manager (aka "Files"). Instead, a Gnome Shell extension "Desktop Icons" has been created for that. This extension is rather new and still quite limited in its capabilities, in particular with respect to the interaction with the file manager.

This has happened because Gnome Shell does not support desktop icons. They consider the desktop not to be the appropriate place for folders and launchers. Most of the time, it is covered by your applications. Instead, users are encouraged to place frequently used launchers on the Dash, and launch applications from the Application overview. For files, users are encouraged to work from Files, or from within the applications, rather than placing a range of files in a single Desktop folder.

@vanadium has provided an exhaustive explanation of why we can no longer drag and drop to and from the Ubuntu desktop. (+1) I would only like to add that if you open the Desktop folder in Nautilus you can drag and drop anything to and from that and any other folder that is open in a separate Nautilus window. It’s the best workaround that I have found so far. 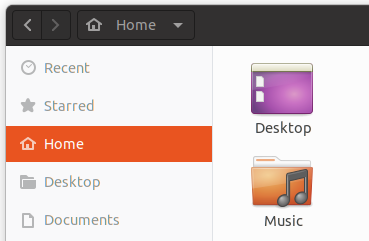 Desktop Icons is a pretty bad implementation, because it lacks the most important features.

The good news is that a revised version, Desktop Icons NG (DING), written by the same author, fixes this.

The bad news is that Desktop Icons is installed as part of Ubuntu, so you can't uninstall it! Using it at the same time as Desktop Icons NG (DING) causes problems.

The good news (!) is that there is a workaround.

As I already mentioned, you can't uninstall Desktop Icons. But, you can disable it.

Not the answer you're looking for? Browse other questions tagged mouse or ask your own question.

3
Repeating error: Can't install desktop-icons@csoriano
2
arrow keys of keyboard doesn't work on ubuntu 20.04
2
I am not able to open the txt file on desktop by double clicking on it

2
How can I configure Ubuntu/GNOME to accomodate my keyboard/mouse habits from Windows?
19
Is it possible to drag files with right click?
7
Mouse clicks when I release the button
0
trackpoint: cannot move mouse pointer a short distance
2
Weird touchpad behaviour on ubuntu 16.04
1
Set Mouse Cursor to Left Center of Currently Active Display With Command/Script