how to setup terminator config file to open with multiple tabs

I am new with terminator. I am trying to figure out how to setup a config file that will open one window with multiple tabs.

So far all the config files I have found do not seem to do anything with tabs.

Does anyone have a simple example of a config file that opens up multiple tabs in a window?

This answer is not using the config, but a script I wrote based on another script I wrote for my job that opens multiple Cluster SSH windows all at once. One thing I have noticed and that is if you click on the close X in the upper right corner of Terminator it leaves the instance open for some reason and the --new-tab doesn't quite work properly. So, you might want to run sudo pkill terminator before running the script. But, if you do type in exit into each tab while closing it, it does close properly.

Every once in a while a terminator hangs on and won't close properly so it opens a single window with errors about key_bindings, but if I run it again it works fine.

The script: You can name it whatever you want. For now, mine is term_test.bsh. 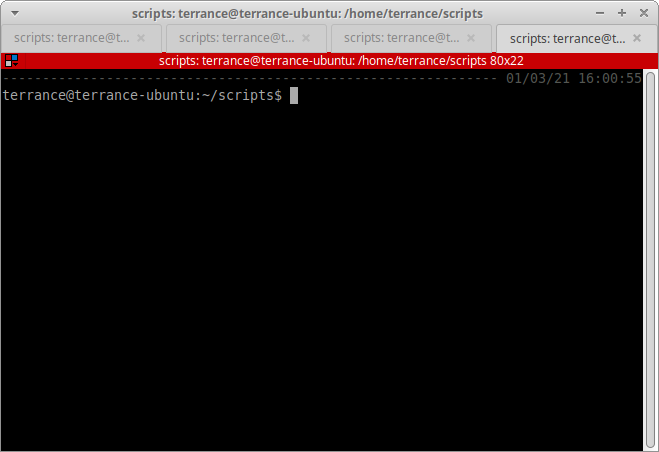 3
How do I get terminator to start up with my custom layout with custom commands?
1
Terminator dock icon - no middle click new window
5
How to open a new tab with new terminator process?
0
Prevent new terminal from being opened in the same directory
0
How to force window focus of Terminator after it is launched with --new-tab as command line argument?
0
How to have terminator open tabs on tailing (less +F) log files on remote machines