Ubuntu Server 20.04 setup stuck at "Block probing did not discover any disks"

I'm trying to install Ubuntu Server 20.04 on a remote server. Problem is, I cannot attach a USB drive and the hosting provider does not allow me to mount ISO images, all I have is a pre-installed Ubuntu system.

To launch the Ubuntu server setup I followed the instructions in this article to add a grub menuentry so I can boot from the Ubuntu Server ISO. Here's the menuentry:

Now when I select this menu entry, the installer starts, creates a ramdisk, copies the contents of the ISO to memory and I get through the first few steps of the setup, until: 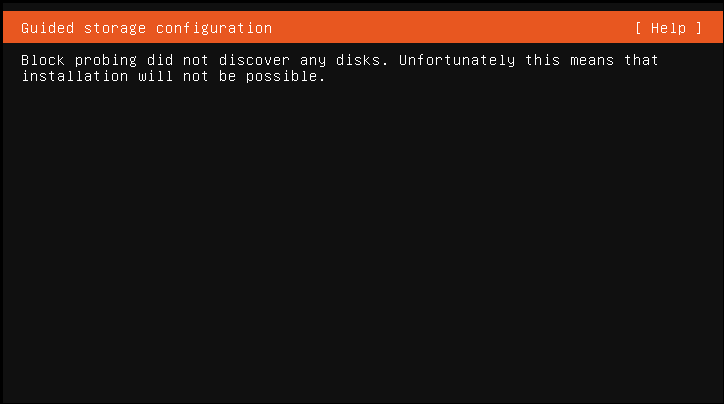 well great, how did the setup fail to discover my hard drive?

when I switch to the terminal and run lsblk I see that sda clearly exists and that sda2 is still mounted at /isodevice - which is unexpected, since the ISO was already copied to ramdisk. umount /dev/sda2 returns "target is busy", but it works with the -l option.

Even then, I get the same error on the guided storage configuration page. What am I missing here? What would prevent the setup from detecting my hard drive, even though lsblk can see it?

I tried it with the legacy installer, as suggested by @elder-geek, using this grub menuentry:

With this setup I can boot the legacy installer and walk through the first few steps, but then I get stuck because the installer can't mount the cd-rom drive it expects. Seems like the legacy installer does not support the toram option (unlike casper) and therefore I can't use it to run the installer from RAM, which is a strict requirement if I want to install from an ISO file on a file system that is going to be destroyed during setup.

update: tried it with the 20.10 installer, same issue. lsblk and parted can see my disk from the installer's command line, but the guided storage configuration fails. I'm running out of ideas here...

This is the result of a bug that is over a decade old. The problem is that the ISO image is still mounted, although the installer is started with the toram option. The solution is to unmount the ISO, but there are two pitfalls here:

As soon as you're on the first screen of the installer, switch to the terminal with F2, then enter

exit the terminal with Ctrl+D and you're good to go.

It appears that you have been impacted by this bug.

It's entirely feasible that you will be successful attempting to install via the legacy installer as a workaround as mentioned in this comment on [subiquity bug 1890651](https://bugs.launchpad.net/subiquity/+bug/1890651/comments/2

If that doesn't do the trick for you, start at the beginning.

If they don't match try to download the file again as it's been corrupted somehow.

Insure you don't have a hardware problem. Boot from live media and Test RAM and Storage for errors the syslog can be helpful here grep error /var/log/syslog as well as tools such as memtest86+ As you may know, Memtest86+ runs without an operating system. Therefore, you must have access to the GRUB menu in Ubuntu. Turn on or restart your system and hold down the ‘Shift’ key to access the GRUB menu. Choose memtest and run the test. Any errors will be reported and indicate RAM must be replaced.

I know this is an old question. But since I ran into this issue recently. I would like to add my solution here. I had to embed my user-data into the ISO. Found this Tool to be helpful. I then added these lines in my user-data

I then added the autoinstall into my kernel line.