No system tray detected after latest update for some applications 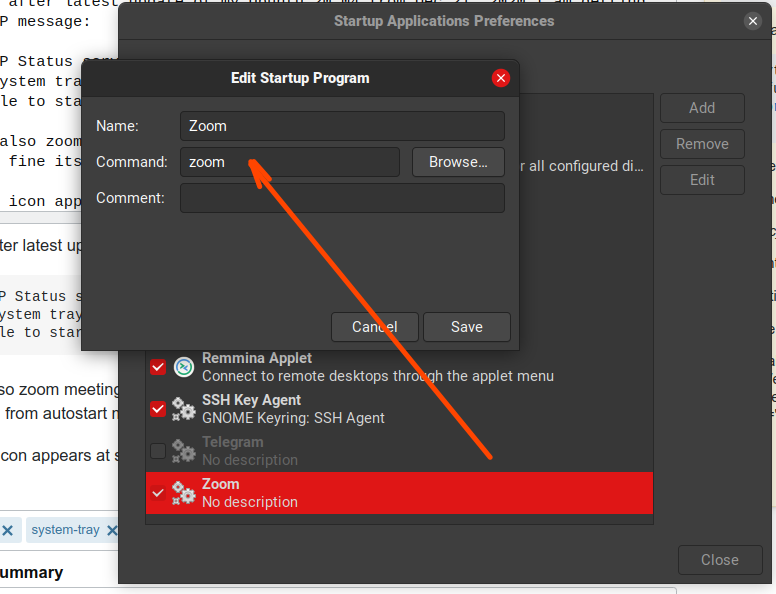 The version 33.1-0ubuntu0.20.04.2 of gnome-shell-extension-appindicator released for Ubuntu 20.04 does not have this problem!

It is a bug

Please file a bug report from the Ubuntu terminal:

or add yourself as "This bug affects you" to an existing bug report.

Workaround 1: Go Back to the Previous Version

Open a terminal by pressing Ctrl+Alt+T and enter the following commands:

The first command installs the older, working version of the app gnome-shell-extension-appindicator. The second command makes sure the app is not updated to the newer version during the next update.

When the bug is fixed and a newer version of gnome-shell-extension-appindicator is released, or if you want to undo the changes by this workaround, open the terminal again, and use the following command:

If for some reason you don't want to use the older version of the app, then read on.

While the bug gets fixed you may want to disable the hplip-systray using the Startup Application app. 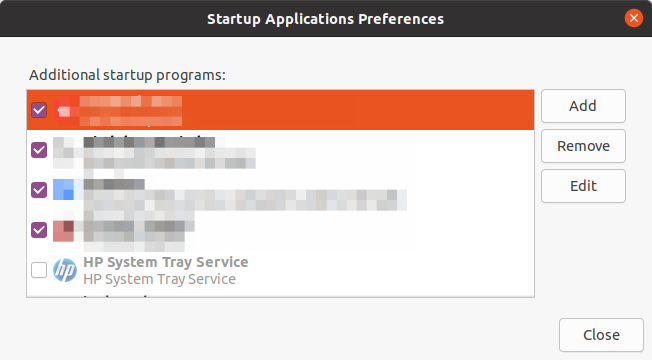 As you see above, I have unchecked the box next to HP System Tray Service.

Once the bug is fixed open this app and check this box. This will return the HP icon in the system tray.

Behind the scene (Command line)

If you don't want to use the Startup Applications app, you can achieve the same goal with the following commands:

The last command will open the file hplip-systray.desktop in the text editor nano. Look for the line X-GNOME-Autostart-enabled=true and change true to false. Save the changes in the file by pressing Ctrl+O and Enter. Then exit nano by Ctrl+X.

Once the bug is fixed you can revert the changes by deleting the copied file using the following command:

This will delete the copied and changed file.

Zoom icon in the system tray

I was able to reproduce your problem. If I set Zoom to start at startup, then the Zoom icon does not show in the system tray. However, Zoom starts.

Please add this information as a comment in the bug report so that the developers know about this.

If you wish you can permanently remove the No System Tray Detected message as follows:

This is the preference of some users who dislike the prominence of the icons in the system tray anyway.

The error no longer appears on reboot but the underlying HPLIP Toolbox utilities are preserved and can still be implemented by accessing the Applications menu (shortcut: press left Windows key and enter hp in the search box) then select the utility required from there.

How will this affect your system?

the HPLIP utilities are preserved and are still selectable. The absence of it in the system tray does not affect the performance of or access to the printer.

Not the answer you're looking for? Browse other questions tagged 20.04 system-tray hplip zoom-meeting or ask your own question.

16
Does Ubuntu force updates like Windows or I can choose if I want to update?
1
Zoom won't close and more common issues
0
Startup applications never launch