I upgraded from 11.10 to 12.04 and now my launcher is missing. I opened terminal using CTRL+ALT+T and the menu shows but the GUI (bar) window decorations above that is missing. 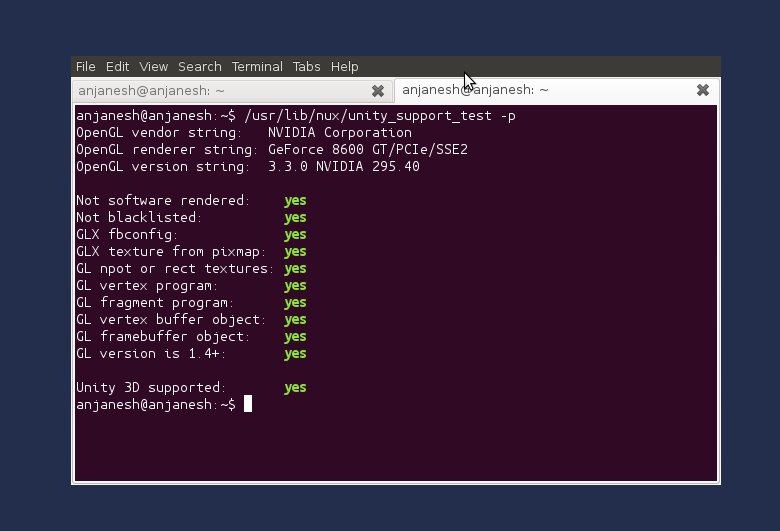 Another Screenshot of my GUI looks :

Then, try unity --reset, followed by unity --replace; try doing this from the desktop and also from the console (switch via Ctrl-Alt-F1).

Try executing this command in the terminal:

It resets your Unity.

I think you are missing the indicators. Open a terminal window and type in the following to add the required packages:

I had installed a minimal Unity desktop on an Ubuntu Server image but that minimal desktop didn't have any of the top panel buttons for sound, shutdown etc.

Adding the above indicators restored everything after a logout or restart of Ubuntu.

I got this resolved. Apparently the upgrade process wasn't through 100%.

I did the following commands:

And somehow after a restart it magically worked.

I had this problem for weeks and had tried the above recommendations. I was due to reload my box when I stumbled upon changing the resolution. My native resolution was 1920x1080 (16:9). I was launching firefox from terminal window and needed to double the resolution for a presentation I was watching. I changed to 1280:720 (16:9) and was surprised to see the left menu return. When I went back to 1920x1080 it was there again too.

I have used gnome (classic). After update to 12.04 any window or app window did not had task-bar with min/max buttons. I have logged off, on log off screen clicked on gnome/ubuntu sign and chose ubuntu and logged in and windows are backed to normal. Logged off again and switch to gnome (not gnome classic) and windows are normal.

I encountered the problem because of I installed the ia32-libs package yesterday (finding it wasted me a long long time)!

After I executed the above command.

If you get the error message:

You may encounter the same problem with me. You can solve it by this way:

PS: I'm Chinese and my English is very poor, so some words or sentences may make you confused. Sorry to all. I like this forum; I can get lots of assistance here. Thanks for your sharing and kindness.

I got this problem too. I found that I had some packages that were kept back. I did an apt-get install on all these packages and now things work again.

I had pretty much the same problem under 12.04. Unity was slow with my aged GPU, so I was using Unity 2d as my desktop for months. For no apparent reason, it suddenly refused to display launchpad and title bar (for all users). Reenabling Unity in CCSM as suggested here was part of the solution, but none of the other measures suggested here, there or in several other related threads, including, but not limited to:

helped me to completely resolve these symptoms under 12.04 (64 bit).

would not work for me. After delivering a variety of error and information messages, it would always hang at:

as shown in the log posted in the thread titled "unity has vanished" for unity run with no arguments.

I noticed that the error message delivered by:

was similar to some of the errors reported by unity --reset:

as reported by user139869 above. Unfortunately, his solution did not work for me. After extensive searching, I found the following solution:

This not only allowed both unity_support_test-p and unity --reset to run, it also allowed Unity 2d to start. I have no idea what caused my problems, but since creating the links above (several weeks now) I have had no further problems.

Go to monitor Preferences: Select same image in all monitors

Not the answer you're looking for? Browse other questions tagged unity launcher gui or ask your own question.