How do I get keyboard menu navigation to work under Gnome 3?

Keyboard interaction seems so broken to me the I must be doing something silly.

Simple scenario: <Ctrl>-<Alt>-T and I get a new terminal. I click "Terminal" and "Reset" and the terminal resets. So far, so good.

Same scenario, using only the keyboard: <Ctrl>-<Alt>-T and I get a new terminal. I'd like to access the "Terminal" menu with <Alt>-T, but that doesn't work. If I access it with the mouse, I'd like to trigger "Reset" by typing r. Doesn't work, either. However, if I press a cursor key (up or down), typing r works.

Now, why doesn't <Alt>-T access the "Terminal" menu and why doesn't r run the "Reset" command (without cursor keys to nudge it) and how can I get this very, very, very basic and widely used interaction style to work?

You have to enable the option 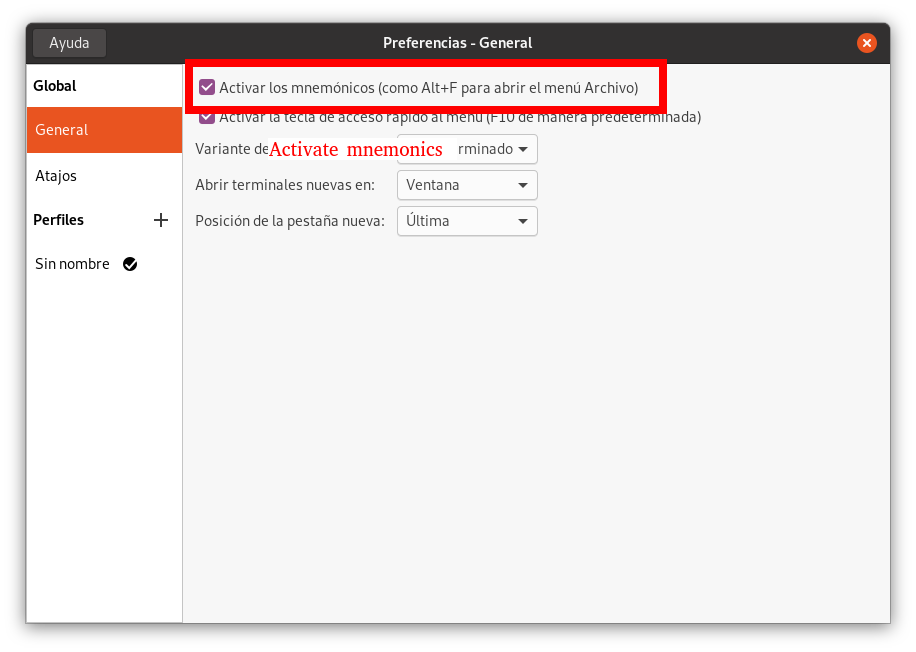 Sorry for the spanish, I couldn't get the terminal in english with LC_ALL=C.

Not the answer you're looking for? Browse other questions tagged keyboard menu navigation or ask your own question.

2
Main Menu keyboard navigation does not restart at the first typed letter. Is this a bug or a tweakable feature?
1
Mapping left Ctrl + right Ctrl to switch-windows
17
Can't set “Alt+Ctrl+T” to launch terminal in xfce4
0
14.04 Unity accessing application menu with keyboard
3
Xubuntu Keyboard partially responding after lid down only in some applications