Through the process of reviewing suggestions for this problem and other testing,the focus has narrowed. The problem has now been identified as: "how to prevent firefox from being updated automatically". Which makes the suggested duplicate's solution applicable, but a bit more extreme than desired because I want other updates to happen.

I am leaving the original question/update here for reference, for those that may be experiencing the same but not associating the symptoms.

Has anyone else figured out if this can be prevented? I have been annoyed for a couple of years by being forced to restart firefox once an update has happened in the background.
For the most part I figured this to be a firefox issue, but I just had a conversation with another ubuntu user that believes that there may be a difference between the way mozilla-downloaded firefox and ubuntu-installed firefox handles updates.

Does anyone know if there is any truth to that? That person is under the impression that ubuntu-installed firefox does not do background updates.... WHICH WOULD BE GREAT!!! but, I have the firefox that came stock with ubuntu.

For a little background (because I was shocked to know this user has never seen this before), whenever firefox updates in the background, every new tab looks like the attachment here. You can't get a working tab until you restart firefox... which is EXTREMELY annoying/intrusive especially when you have a dozen or so tabs open that you are actually using. 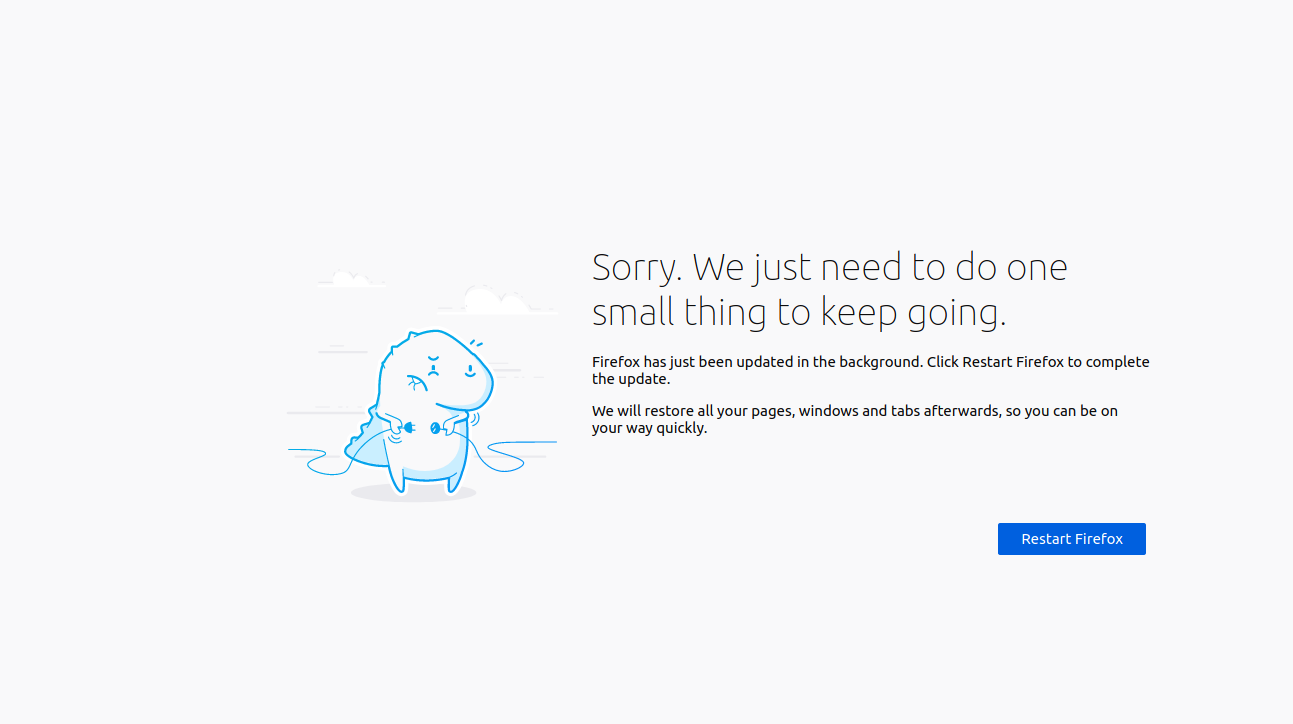 SOOOOO... at this point has anyone figured out how to prevent this? or stop the auto-background-upgrades... (which seem to be different in timing from the ones coming from the software updater)... or delay them? Over the years I have played with some of the numbers in about:config and extended them out to years, to no avail. I don't "think" this is a nightly ubuntu "unattended-upgrade", because then I would probably never see available firefox upgrades in software center, and I often do. As far as my software... it's been happening over the last 2 or 3 ubuntu versions... I even think it happens in Opera(but I don't care about Opera). I know this is more of a "policy" than a "problem", but now I am more focused on the prospect that it may be ubuntu install vs mozilla download install related? And that I remember questions like this from long ago and wondering if anyone knew of any progress or obtained any new information?

update - new info:
Because I was working with someone else with this in the evening, I was paying close attention. My firefox version was 80.0.1 last night. Same thing JUST happened on a different machine, I got the You Will Restart Now and Like It tab seen above. I restarted and now I have version 81. Being that I DEFINITELY know I didn't get a Software Updater popup, I started checking into unattended-upgrades.... and what do you know... (after all of these years) According to this /var/log/unattended-upgrades/unattended-upgrades.log, firefox is actually an unattended-upgrade(which i did not believe).

Knowing this now, @N0rbert's answer will definitely probably help this, but I want to only kill the unattended-upgrades for firefox. So I will now shift to figuring that part out. I'm still a little baffled that some firefox users have never seen this. Makes me think there is a little more to it or that it is common practice to turn off unattended-upgrades??? will update.

add firefox to the Package-Blacklist portion of the file.

not 100% sure which, if any, services need to be restarted... So I rebooted just to be sure.

Testing:
It will most likely be a while before you can test this configuration depending on whether or not a firefox update is currently available... which can be verified by listing the current upgradable packages:
sudo update
sudo apt list --upgradable
and looking for firefox in the output.
If it is there you can run the following test run to verify the configuration change made to 50unattended-upgrades.

5
How to stop apt from doing anything
0
Can I keep using my computer during 20.04 upgrade install?

0
Firefox 9 ?? Where is the update for 8?
0
Strange update: "Safe and Easy Web Browser from Mozilla firefox"
0
I don't have firefox and I'm getting firefox updates?
2
Firefox shows all background color as white starting today on all pages
0
How to get Firefox 67 to update via Software Updater?
2
Why do I receive updates notifications even if I configured unattended-upgrades?