Update 2021-03-19: Just received an update today on the bug that they pushed the xfce4-weather-plugin version 0.10.2 to the focal-updates repository that does not have this issue. Feel free to reinstall from the Ubuntu Repos.

This affected version 0.10.1 that is in the Ubuntu Repository. The git build below now installs version 0.11.0 which fixes this issue.

The reason for this is that the API from https://apt.met.no has changed the version number that the plugin is calling.

The page gives this error message:

I have filed a bug report for this to get new API added to the code here:

There is a bug filed at the Xfce GitLab:

Apparently there has been a fix pushed upstream it is available in git repo xfce4-weather-plugin except there is an issue that the xdt-autogen version required to build this is 4.14.0. The version in Xubuntu 18.04 is version 4.12.0 as the highest. The version in the git is looking for isn't available in the xfce4-dev-tools package for 18.04. However, I was actually able to get a git version to build with version 4.12.0 with some quick modifications to their autogen.sh script. I have the instructions below.

I found the version that comes with 18.04 actually has a problem with showing when it is evening outside as I was seeing the icon showing a moon when it was only 4 pm. I updated to the version, I believe is version 0.10.1, in the git repo and that corrected it.

Remove Weather plugin from panel and after remove existing plugin

If running 20.04 also install the following:

Now get the git version, build and install

If you are running 20.04 or newer the next line is not needed:

Continue with the build:

Re-add the weather plugin to the panel and it should now work now. =)

Quick screenshots of it: 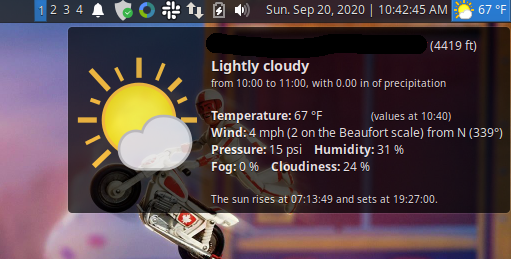 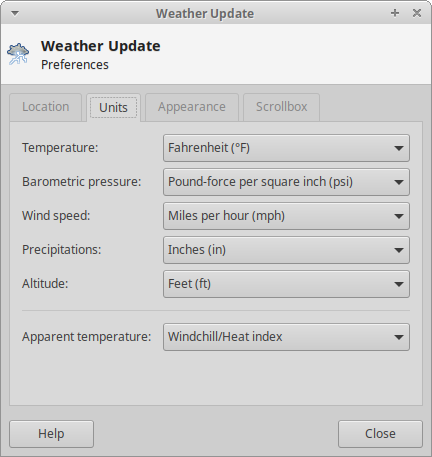 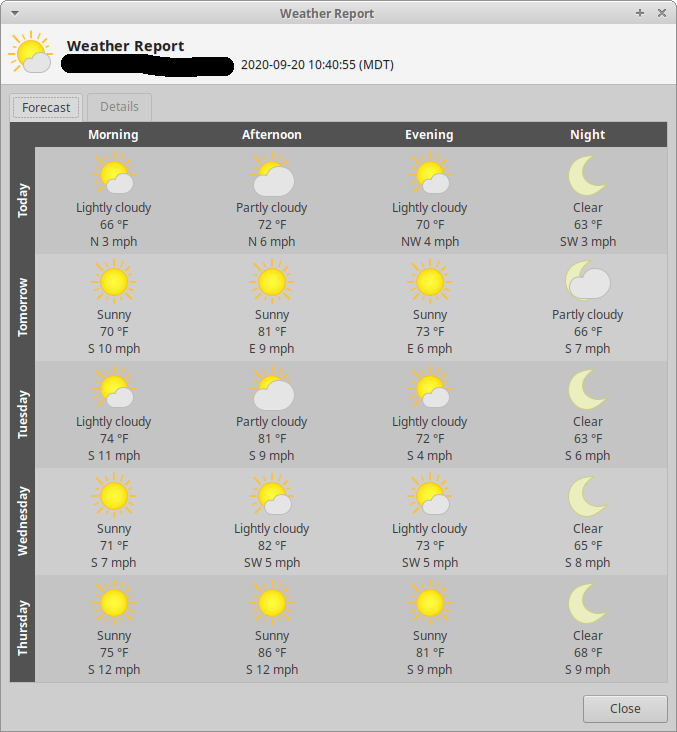 Thanks to all above and 2 I think ones I found need for Ubuntu Studio 18.04 last week this script 2 systems of mine:

Thanks for the post! It worked well for me except, that I had to install a bit different set of dependencies:

Here is the patch file by the way:

Not the answer you're looking for? Browse other questions tagged xubuntu xfce plugins weather or ask your own question.