Upgrading system to 12.04 using CD did not preserve my users - how's best to restore them?

I performed both of these upgrades using the CDs as this was on a system with a very bad internet connection (and in fact the network connection was non-existent when I did the upgrades).

Everything seemingly went fine, except for one quite important aspect: my original (10.04) users have not been preserved. However the files are still there in /home/xxx, so at least there's no concern about any data loss.

I had two users in my original setup: an admin user that used Unity, and my main user (non-admin) that used Gnome Classic. (I realise this may well be irrelevant.)

During both of the upgrades I performed today I was asked "Who are you?" and prompted to enter my name, username, new password, etc. This is where I first got suspicious, so on both of these occasions I created an entirely new user.

On the initial upgrade (10.04 to 11.10) there was no mention of the possibility of importing old users at all. Then on the second upgrade (11.10 to 12.04) an "Import User" (or similar) screen appeared after the "Who are you?" screen, but it was accompanied by a message saying there were no suitable users found that could be imported.

So... my question at last: What is the best way to resurrect my old users?

Is there an import tool I can use?

Should I just create a new user with the same name and see what happens?

Should I create a new user with a different name and copy the old user over it in its entirety?

Or should I create a new user and just copy across the old data piece-by-piece as-and-when it's needed?

One last note: I do have a Deja Dup backup of the users on my NAS, and I'm currently creating a tar archive of them too (although the tar will obviously be from post-upgrades).

Any help or advice would be much appreciated!

When performing an "upgrade" skipping releases (as you did when upgrading from 10.04 to 11.10) we will create a new installation with files in HOME untouched. Unlike an upgrade from 10.04 LTS to 12.04 LTS or from 11.10 to 12.04 users and groups from the previous installation are not preserved.

There is no other way than creating these users again with their home pointing to the former user home in /home/<username>. This will at least restore configuration settings and the private files for each user.

When creating our new user from the command line we can also assign a path to the HOME (which would be the existing path):

to have access to advanced user settings from users-admin (search for Users & Groups in the Dash). Choose Advanced Settings to configure the users's home: 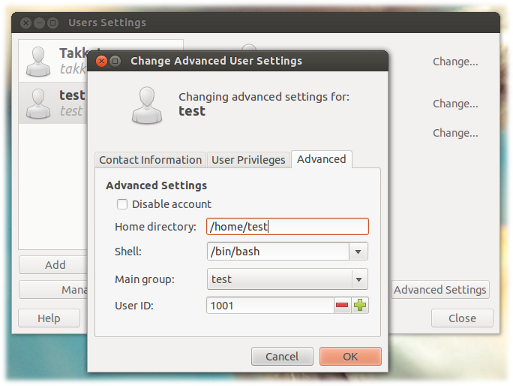 Take care to give the users the same permissions they had before. In case there were any groups other that the default groups relevant to the user you need to assign them to these groups as well.

Not the answer you're looking for? Browse other questions tagged 12.04 upgrade backup cd users or ask your own question.