20.04 local repository not working for updates/installs

I successfully created a local repository on a 20.04 server VM in a VMware ESXi 6.7 environment using apt-mirror, however I'm not able to perform installs or updates from that repository. Multiple errors indicate 404 not found which is appropriate for the file icons-64x64@2.rar because it wasn't found in the repository in the expected location.

When attempting to install packages, the message "E: Package 'packagename' has no installation candidate" is returned. The screenshot was taken from a 20.04 desktop VM with address 192.168.46.129.The repository host name is "repo" which resolves to address 192.168.46.130
This configuration has been tested multiple times in multiple environments with the same results. For example, a 20.04 server VM from a fresh snapshot was used and the results were the same as the original attempt. A second VMware environment was used to host a 20.04 server and 20.04 desktop VMs and the results were the same.

In both environments, neither server or desktop VMs were able to successfully use the local repository. The server wasn't able to utilize the repository that it was hosting locally.

Attached is a screenshot that shows the results of an update as well as the sources.list and a web browser pointing to the repository contents.
If anybody has recommendations for getting the local repository working, I'd be most grateful. 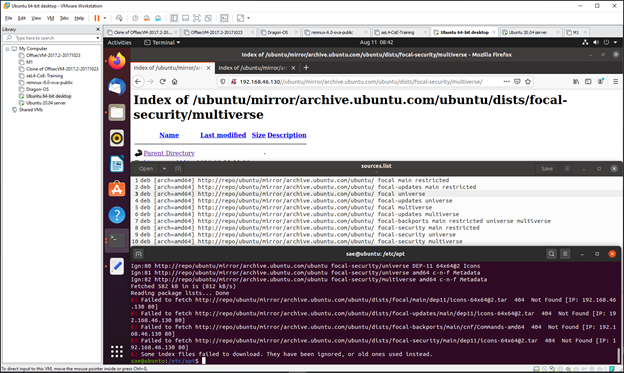 Here's a link to the updated apt-mirror package I used to solve this problem.
https://github.com/Stifler6996/apt-mirror

Not the answer you're looking for? Browse other questions tagged apt 20.04 repository software-sources or ask your own question.

10
How do I set up a private apt repository that can support multiple versions?
1
Landscape syncing mirror pockets
1
iriunwebcam doesn't work on 20.04
0
20.04 problem updating/installing from local repository error 404 not found, no installation candidate found
0
Access virtual machine from browser under virtual box
0
Can not resolve domains in wireguard network on xubuntu 20.04
0
Ubuntu 20.04 LTS Focal apt-get update not working