I'm having headaches with OBS, I recorded things that when I started the recordings it looked fine on OBS, then upon reviewing the footage I found I'd been duped by OBS.

I got this for many applications and while recording the whole screen or just a window.

One was discord (I was recording mainly for audio but I would have liked to have the visuals of the avatars lighting up for it to be clearer in the video who is talking) another is a fullscreen game.

The symptom I get watching the outputted mkv is that I switch from OBS to my target app and right as I do I only get that last frame in repeat.

during this time the cursor capture continues to work. we see the right updated cursors and position but it's over a still picture.

sound continues to work too.

however under ubuntu 20.04 I get this new bug. I first tried the ppa version which is what I'm used to using from the previous ubuntu versions and then i tried the snap. same exact behavior.

Any clues as to what I am doing wrong? ffmpeg is installed.

I figured it out! thanks to the bug report Window Capture Black Screen.

If I record as a window instead of the whole screen and select the running FA instance initially I would see a black screen in the preview. so initially I thought window recording wasn't possible.

But if you go to the next step you get this screen: 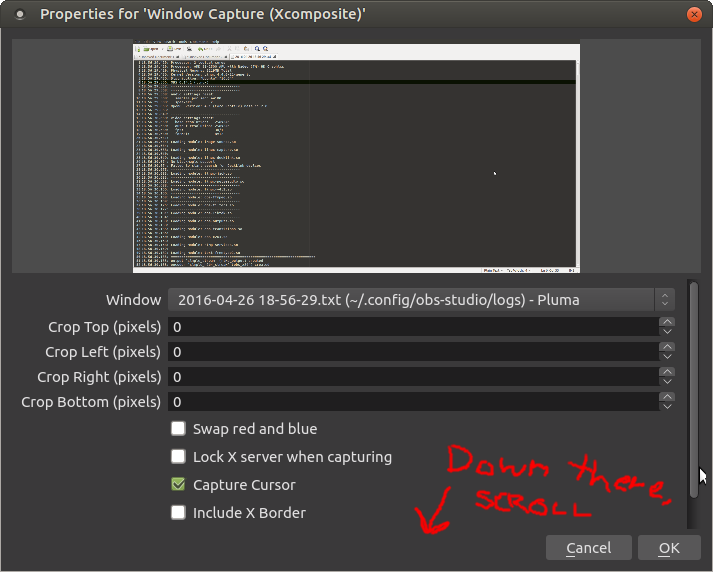 And you can enable the option called "alpha-less texture format (Mesa workaround)" (which makes sense because FA is a mesa app) then it works.

(I actually had to toggle on (then off because I don't actually want to swap colors) "Swap red and blue" to force it to apply.

Not the answer you're looking for? Browse other questions tagged 20.04 obs-studio or ask your own question.

2
OBS Shut Down When Trying to Run It
1
OBS Not Opening
0
Streamlabs Alerts and OBS Studio
3
How to Crop in OBS?
0
18.04 Full screen recordings when trying to record w/OBS turn screen black
2
obs-studio not working with ubuntu 20.04