I upgraded from 18 to Ubuntu 20.04 a few days ago. I listen to music through Google Play Music's website which I load in Firefox. I noticed that now Ubuntu has app specific volumes (cool). Since I stream shows and movies through Firefox I decided to crank the Firefox volume to the max and then fine-tune the volume on the website and with the system's master volume. The problem is that the sound for Firefox keeps resetting. In fact, it seems to reset with every Google Play song. I go from being able to hear my music to hearing silence. Why does this happen and can it be stopped? 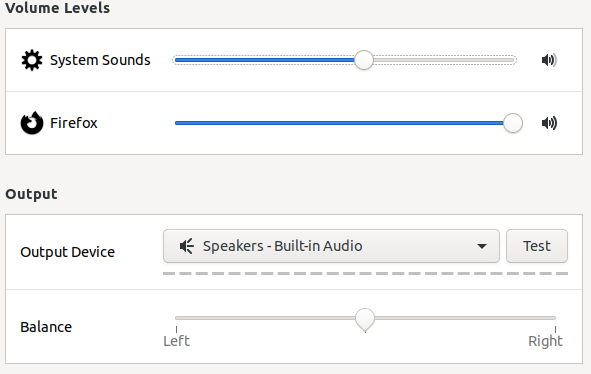 For the moment, I'm leaving the Firefox volume to where it defaults and increasing the volume on the website.

The "daemon.conf" can be found in the following paths:

flat-volumes Enable 'flat' volumes, i.e. where possible let the sink volume equal the maximum of the volumes of the inputs connected to it. Takes a boolean argument, defaults to yes.

flat-volumes scales the device-volume with the volume of the "loudest" application. For example, raising the VoIP call volume will raise the hardware volume and adjust the music-player volume so it stays where it was, without having to lower the volume of the music-player manually. Defaults to yes upstream, but to no within Arch. Note: The default behavior upstream can sometimes be confusing and some applications, unaware of this feature, can set their volume to 100% at startup, potentially blowing your speakers or your ears. This is why Arch defaults to the classic (ALSA) behavior by setting this to no.

I would like just elaborate more on what's written in the accepted answer.

Before I have changed anything, this was the behavior I have observed:

When I watch an mp4 video in Firefox, let it be embedded in a webpage, or opened from the disk via file:// protocol, and I use this video's HTML5 video controls to lower the volume, then I get something similar what you have on your screenshot: the Firefox tab's volume slider will "follow" what I did on the mp4 video's volume control. And then sometimes I get freshly opened tabs with the volume a little bit tuned down by default, or even, sometimes, muted completely.

Overall this can get a little frustrating sometimes, so I was eager to try out the new info.

In /etc/pulse/daemon.conf I have found the following line, as is:

Looks like it's commented out. So first, I uncommented it:

Trying out Firefox, I did not seem to notice any difference to the previous behaviour.

Then I changed to:

After a reboot, there was a difference indeed, but an unwelcome one.

Now in a new experiment, I opened a video in Totem (the app now called Videos), and found that Totem's built-in volume slider was about two-thirds. So I pushed it up to 100%, and it took the master system volume level to 100% with it: in other words, I controlled the master system volume level from within the Totem UI (while I could have been unaware of it). Extremely bad idea; any other app emitting a sound at this point, could rip the speakers out (and your eardrums in).

So, I think, if you like your speakers and your eardrums, consider avoiding flat-volumes = yes.

None of the fixes mentioned here solved this issue for me. I found a temporary workaround by visiting Firefox's about:config page and changing the media.volume_scale parameter to 3.5, which adjusted Firefox's default volume back to 100% on my system. This value might be something different for your system, so I suggest experimenting till you get it right.

Changed the value back to 1.0 and everything seems back to normal now.

I had to uncomment flat-volumes = no and set the parameter to = yes. After rebooting the volume doesn't change now.

Not the answer you're looking for? Browse other questions tagged sound firefox volume-control or ask your own question.

1
JACK Issue with Internet DJ Console in Ubuntu 14.04
3
Audio interface: how to use it as a sound card
2
Slow volume fade-in when playing audio tracks
1
No HDMI audio out, and low volume on speakers
2
How do I get the FiiO BTR3 USB DAC to work?
0
Problem with sound volume on 20.04 and B450 AORUS ELITE