Ubuntu partitions (/, /home & swap) are showing under a Windows extended partition? And, how to use the existing /home partition?

I was getting frequent error messages (usually on Ibus Preferences – which were very frequent, and errors on few on other categories too). So, I re-installed using a LiveCD creating new partitions for root (/) and swap (linux-swap) by formatting them. However, I did the mistake of not selecting the existing home partition (/home). In fact, I did not specify any particular space for /home.

After the (re)install, I tried something to mount my old /home partition back. And, after doing this (or, at least I think so), all my ubuntu partitions are showing under a windows (extended) partition (/dev/sda3). I thought it was because I installed ubuntu in a empty windows (NTFS) partition (/dev/sda3 of 195.1 GB, in the below fig.). 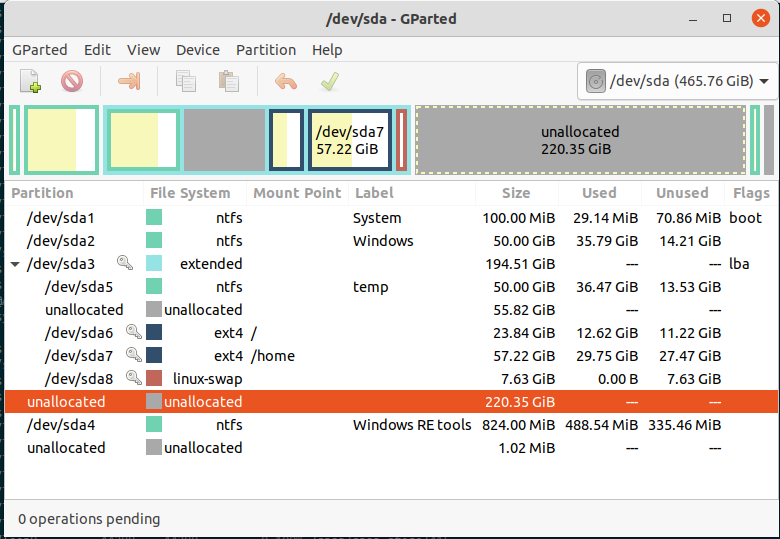 Unfortunately, I don’t have a screenshot taken after the original ubuntu install.

(Note the difference in the size of /dev/sda3 after the 1st & 2nd installation. See screenshots). 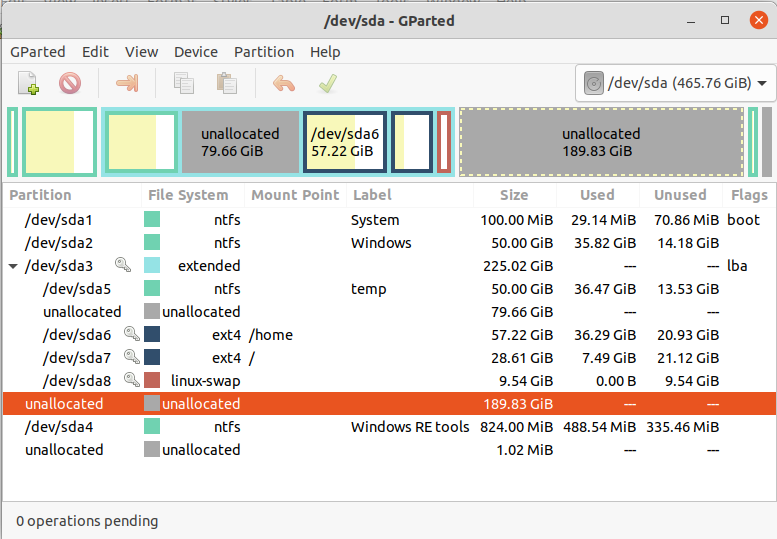 Now, I have 2 questions.

Note: I have all my data under the /home partition.

@heynnema: Sorry about the delay. I didn’t want to reply until I have tried everything suggested & get something working (or, not working).

Thank you. Yes, your answer was (very) helpful in understanding why my Ubuntu partitions (which need to be primary) were showing under the Windows extended partition (which is a logical partition). In fact, I missed to notice that I already had 3 primary partitions in Windows. I knew the MBR & Windows(C:) partitions to be primary, but I missed to consider Windows RE tools to be another primary partition (and, I still don’t understand the reason why there should be one – as it still expects one to have a recovery image in an external drive).

I couldn’t try your suggestion, as I don’t have an external drive with that much empty space. That is why I had to try copying /home data via terminal and that’s why I had to mention that I was unable to access /dev/sdax/ (/home).

But I still have 2 questions.

Anyway, so I tried to live with my existing hardware & installed ubuntu again with a completely new /home space.

@walttheboss: Thank you. That was a neat trick with fstab. I get fascinated by these kind of tweaks, as they let me understand the underlying structure/code better.

I tried it, but somehow I couldn’t get my old users to work. I was also unable to access my 3rd-party applications - which I installed in /home/software, assuming I can always have them with me (I still think I’m right to assume). I will try your method next time I mess-up something (I’m sure I will, as that’s how I learn – mostly). So, I re-installed it completely.

I’m still interested in knowing tweaks/workarounds (if there are any) as an answer to my other questions.

Finally, @heynnema: Sorry, I don't have a check-mark icon next to your answer (see screenshot below). I’m also not sure if I should accept if I haven’t tried it (yet). However, I have up-voted (up-arrow) as I was able to do so.

@walttheboss: Sorry, I couldn't find a way to up-vote your answer.

You have a bit of a mess on your hands. Let me explain.

You have a smallish 500G HDD, formatted with a MBR style partition table. This kind of format can only have 4 partitions max. So they trick the system and usually have 3 primary partitions, and 1 extended partition that can hold a bunch of logical partitions.

When installing Ubuntu on a smallish disk, the mistake many new users make is to try and manually partition their disk during install. Bad idea... for a number of reasons. In your case, you've ended up only using 1/2 of your total available disk space. I recommend letting the Ubuntu installer partition the disk for you.

I assume that Ubuntu is your primary OS, and that Windows is your secondary OS.

Then boot to a Ubuntu Live DVD/USB, and deleting partitions sda5/6/7, doing a swapoff on sda8, then delete sda8, and finally sda3. Then reinstall Ubuntu, without manual partitioning, and using the "Install along side of Windows" option.

If you need to share files between Windows and Ubuntu, with little effort, later you can create a new NTFS partition for that. It would become the D: drive in Windows.

In the BEST scenario, you'd have backups of all of your important data, then we'd wipe the disk, reinstall Windows first, then boot to Windows and use Disk Management tools to shrink the C: partition to approximately 100-200G. Turn off Fast Boot in Windows, and turn off Secure Boot in your BIOS. Then install Ubuntu using the "Install along side Windows" option. Lastly, you'd restore your data to the Windows and Ubuntu partitions.

Later, if you wish to share files between Windows and Ubuntu, with little effort, an additional NTFS partition can be created for that.

Not the answer you're looking for? Browse other questions tagged dual-boot partitioning mount home-directory or ask your own question.

5
Regarding partitions for dual-booting Ubuntu with pre-existing Windows 7
3
Ubuntu 11.10 (Oneiric Ocelot): Install Windows on logical/extended partition — dual-boot
1
Is there any possible (and simple) way to delete my Windows partitions and extend my Ubuntu partitions?
1
Ubuntu 12.10 showing incorrect size of already existing Windows partitions
1
Can I install Ubuntu on logical partition under an extended partition while triple booting windows, Ubuntu and Kali Linux?
0
Can I install my ubuntu /home partition in my mac extended journaled partition
0
How to add a home partition after installing Ubuntu?
1
Is it possible to re-use an existing encrypted home partition for a new Ubuntu install?