I have a mic mute button on my Lenovo Thinkpad T420 , but it doesn't work.

So I tried xev command to monitor press event, and that key wasn't captured.

Is there anyway to fix it , like add raw key code ?

It's a little tricky , but with the kernel patch and acpid script , it works now.

The rest I need is a notify daemon like the one for output mute , but it doesn't matter much now.

This solution should work for all Thinkpads with a mute button which also has a built-in light. It may also work for other Thinkpads.

Apart from the notification bubbles:

There are two possible "hardware" indicators (to show that mute is on or off):

a. Determining the Mic-Mute hotkey code and Mic input device

Depending on what you see, "Internal Mic" or "Capture" is your input device.

Choosing either the Power Light or Mic Mute indicators

Setting up the script 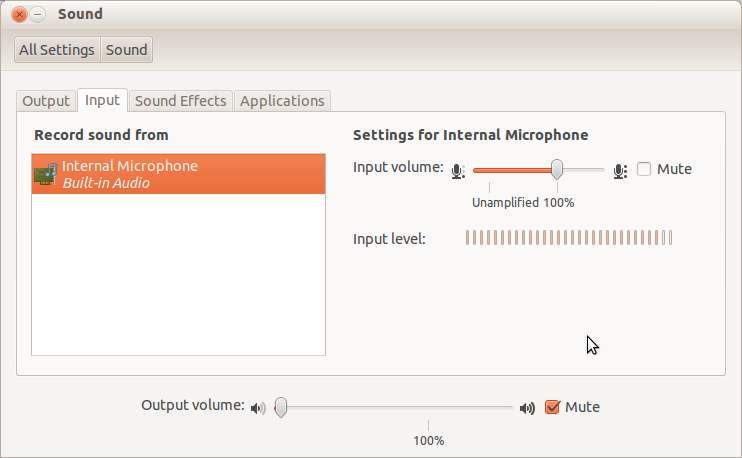 Installing indicator-sound solved the problem for me.

I couldn't get it to work straight away on Ubuntu 12.10 first time using a linux desktop environment as well.

It was fixed with just adding quotes and removing the comma (and adding my username):

and then followed your steps in compiling the thinkpad_acpi.

All on a Thinkpad T520 with NVS 4200M, Ubuntu 12.10. Haven't rebooted yet but I tested with the test step you have outlined and it works with turning the mute LED on and OFF and actually muting it (with the notification). Jumping the gun a little bit seems to work fine. Thanks.

Well rebooted, the script itself works fine muting and unmuting but I didn't install the patched thinkpad_acpi... oops

Okay, rebooted again after installing it properly this time and the LED lights up as well. Should probably have a start-up script to check if the mic is muted or not and turn the light on/off, since the current setup will only turn the light on/off when the button is pushed.

To get the light to show if it's been muted or not at start-up instead of when the button is first pushed, I just saved:

Gave it permission to execute

As lenovo-mic-check to /etc/init.d/ and then ran:

Now the light is on if I reboot the computer, NOTE: the second if could just be an else.

7
Lenovo Mute LED Button Not Working
4
How can I enable microphone mute button on Thinkpad W520?
3
T480 Disable audio mute led
2
How to disable/enable keyboard when external keyboard is present
0
Unable to record audio even with all working amixer controls | thinkpad t430