With certain Windows fonts there is a display issue where ligature-kerning seems to flip out and make the two letters bold. Here's a screenshot of an email using Helvetica in Firefox:

As you can see, it seems to be something about the way crossed characters (t and f) connect to each other and letters like i.

I've had this problem for a very long time (over multiple systems) and wondered if anybody has ever seen similar issues popping up and found a way to fix them.

Note: I think this does just affect Firefox. Chrome and LibreOffice are both fine.

Another solution that will work with all applications, including Libre Office, is given by aldeby:

Edit or create the file ~/.fonts.conf and paste this code in it:

Make sure to keep the XML structure.

Log out and in again, and Calibri (and possibly some other fonts) will look much better (actually even better than with the other answers given here, because the ugly bitmap substitutions are completely disabled).

Disabling ligatures (see Calimo's fonts.conf answer) is the wrong direction! It may remove those over-aliased "bold" ligatures in fonts like Calibri, but it also removes some of the beauty of typography. That's rather similar to shrinking the font until you can't tell the difference.

I solved this for my system by removing the Calibri font, installing Carlito, which is "metric-compatible with Calibri" and is packaged with "a mapping entry to fontconfig (local.conf)," and refreshing my font cache:

You can then verify that Carlito stands in for Calibri:

(If this doesn't work, you may need something like sudo rm /usr/share/fonts/truetype/msttcorefonts/calibri* though the case and exact location may differ.)

Before removing Microsoft's Calibri, I saved a test document in LibreOffice that used Calibri and took a screen shot. After doing that, I quit LibreOffice, opened it again, and then loaded my test document. The "Calibri" font name was italicized to indicate that it was substituted for. I took a screen shot of this substituted version and pasted it below the original: 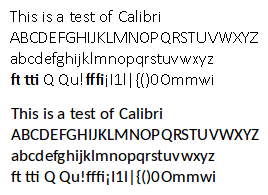 The above text is a pair of screen shots of 13pt Calibri, with Microsoft's Calibri above Carlito as matched by fontconfig. There is no bold, no formatting, "pair kerning" enabled, as rendered by LibreOffice 5.0.5.1.

Carlito is quite close to Calibri, ligatures render properly, and it's much prettier overall.

You can do the same with Caladea for Cambria with fonts-crosextra-caladea and you can use Google's Croscore fonts Arimo, Tinos, and Cousine for Arial, Times New Roman, and Courier New with fonts-croscore. Learn more at Debian's Substituting Calibri and Cambria Fonts wiki.

But what about Helvetica?

This question asks about the Helvetica font, which is Apple's preferred sans-serif font. Microsoft preferred Arial before it changed to Calibri. The default Linux mapping varies by distribution, but it's typically either Nimbus Sans L or else Liberation Sans, e.g.

If you run that and get Arial, that's a pretty good reason for having the ligature issue described above – Arial is not a great font.

Helvetica has quite the culture surrounding it and I can't find a font that is fully metric-compatible with Helvetica. Arial (and fonts metrically compatible with Arial, including Liberation Sans and its fork, Arimo, have identical character widths (which mean they're "mostly" metric compatible; text will wrap the same way as with Helvetica). Among the free fonts, Liberation Sans and Nimbus Sans seem to have the most similar aesthetics.

There's also IBM Plex, a new font with big money behind it[1][2]. Plex is designed to replace Helvetica (it also has condensed sans as well as serif and monospace fonts) in all of IBM's materials, though it is not at all metric-compatible to Helvetica or other fonts. Font Squirrel has a nice view of samples of the Plex fonts.

To manually alias Helvetica to another font (and therefore not need to remove Calibri and/or Arial, though in that case you should also manually alias those), edit your ~/.config/fontconfig/fonts.conf file (for older systems, that's ~/.fonts.conf. To avoid confusion, I symlink the latter to the former) as noted in this answer, adding a new <alias> section for Helvetica (this one uses Arimo. Make sure you have it installed):

lgarzo's answer will work only on websites that have a "noligs" class on the text (most websites don't).

To globally disable ligatures on all websites, add the following line to your userChrome.css:

The easiest way to do that is to create a new style with the Stylish extension.

A few remarks popped into my mind while looking at the image:

I think the problem is based on the font not supporting ligatures/kerning correctly.

You can disable ligatures in FF with the CSS rule below:

Then just restart the app (in my case thunderbird).

and save this file under ~/.fonts.conf

16
Problems with ttf font rendering under LibreOffice
10
What is the font in Ubuntu which is just called "Sans"?
9
The Calibri font on Ubuntu
4
Blank (missing) ligatures (tt, ti, fi, ff etc.) in FF when Cambria / Calibri fonts are used
0
Lato Font Not Displayed Correctly Ubuntu 16.04

3
How can I fix my problems with fonts in Firefox?
6
How to fix the fonts in Firefox?
7
Romanian special characters: the default (comma, standard) version looks bad in LibreOffice, the cedilla versions are reported as incorrect
1
Fonts screwy in toolhints, Select list items on multiple browsers and many apps
2
Font rendering some wrong glyphs for Romanian language in Ubuntu 20.04