Update: Live screenshot of when it happens 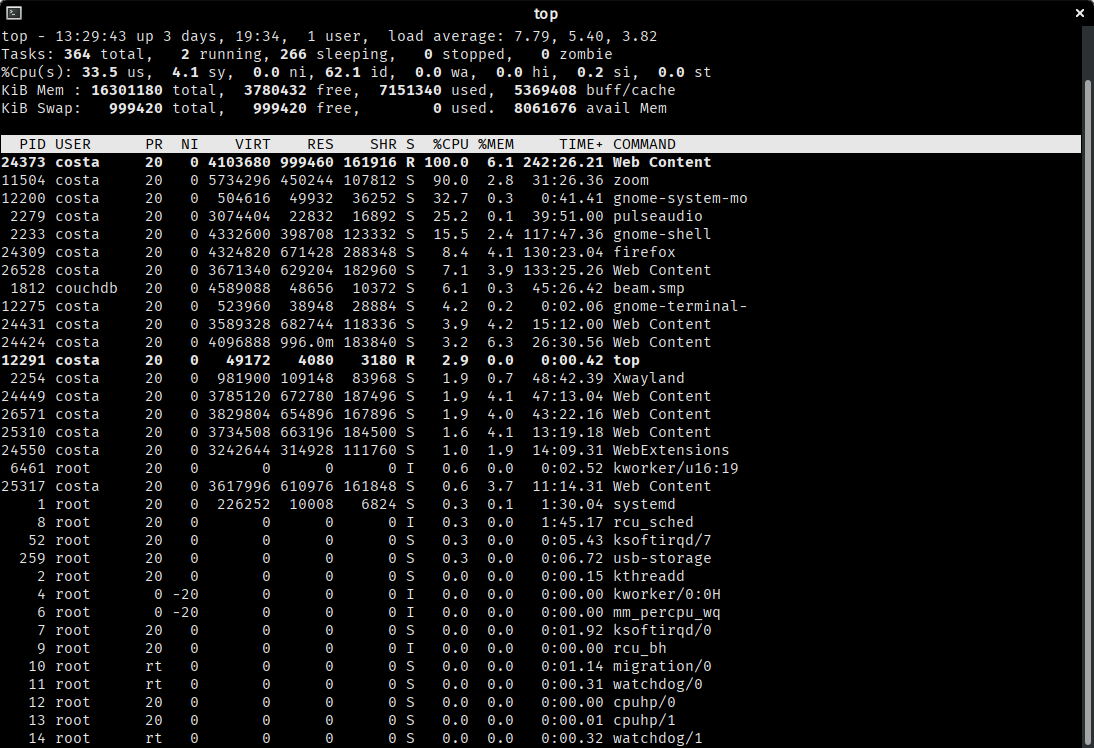 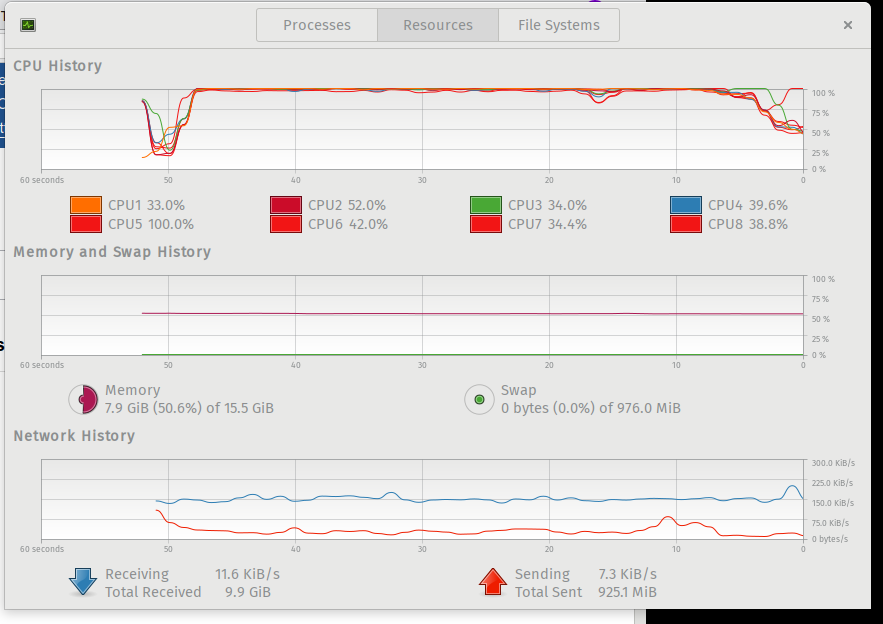 So... When I'm using Zoom, most often during screen sharing, or when someone else is screensharing, all of my cores zip up to 100%, as in the screenshot above, and everything turns really sluggish. I can make out people telling me there's an echo, and Zoom gives me that "high CPU usage is slowing down Zoom" error, but then Zoom is what's chewing through my CPUs. Even if I kill zoom, and my browser, I still have some strange sluggish behavior. I can't open apps, nothing is as responsive. It's like something goes permanently wrong.

The only way to restore normal function is to restart the machine. 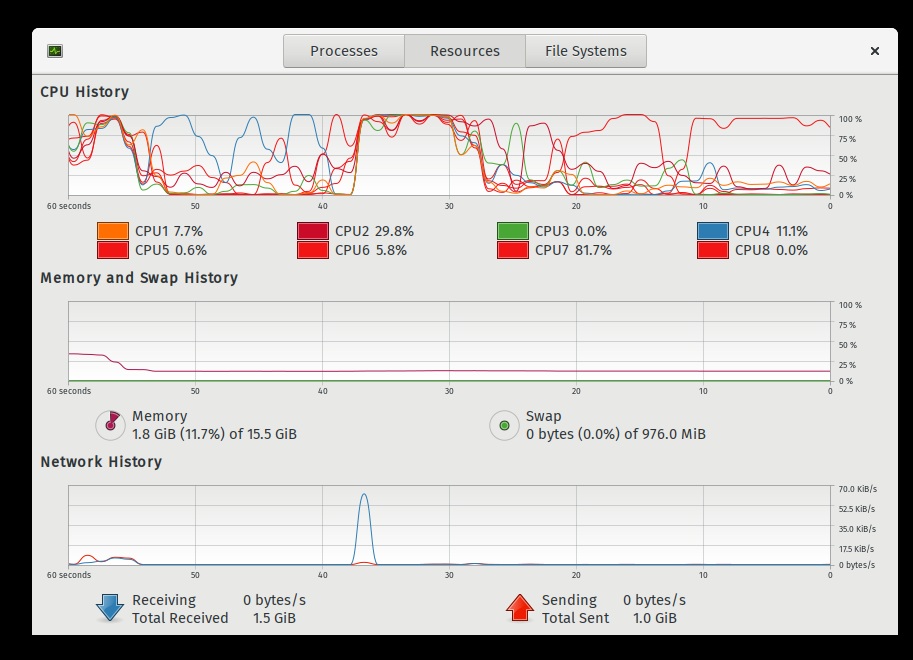 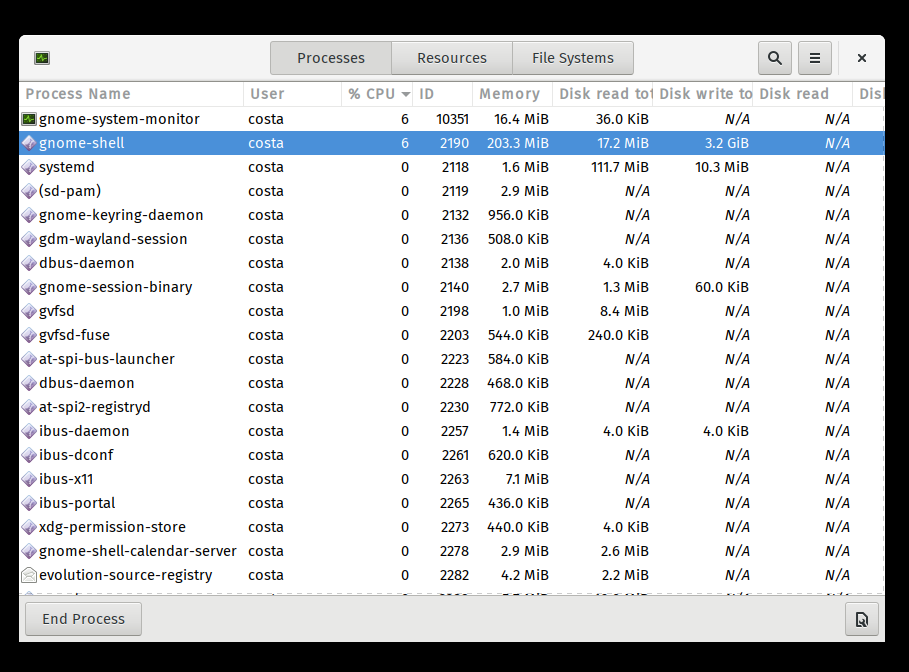 Should I just throw out my computer, fly to a Caribbean island and retire?

It sounds like you've got two problems going on as far as your computer is concerned:

I infer that what you actually mean is

To deal with the former, as well as complaining loudly (and not using video backgrounds), you may wish to consider limiting the amount of CPU it can have. This is done in linux via control groups or CGROUPS, which can effectively limit scheduling for a single group. For example, you can use CGROUPS to get the kernel to constrain processes within a CGROUP to use, let's say for example, 100 ms out of every 1000 ms (or .1s out of every 1s) of CPU time. This will make things worse for your Zoom experience but might be better over all.

Here, cpulimit is the group name that controls the cpu usage. Now, you have to set cpu.cfs_period_us and cpu.cfs_quota_us property on the cpulimit group.

To check to see that this is the case, run sudo cgget -g cpu:cpulimit and observe that these flags are set.

Now to actually use this and start a process, start the program or command with cgexec as follows:

Firefox has a nifty about:performance page that will help you spot hungry pages. often these use a lot of javascript, display ads, or may even be so rude as to run, for example, a cryptocurrency miner without telling you. As well as killing (closing) the culprit page, one thing you might want to do to stop that happening again is taking the plunge and using a selective javascript blocker like the excellent umatrix to prevent that happening again. Sure, it breaks some pages, but you usually learn something about the web in unblocking particular links ;-).

3 – Stopping your GUI from lagging the nice way

As well as the not-often-used cgroups to place a hard limit on processor scheduling, Linux has an inbuilt idea of process priority. For reasons of history that I would love to learn if others can educate me, Linus called this priority niceness. We can renice (or sudo renice) a process to make it "nicer" -- i.e. run with a higher priority. By default, users can renice processes down to a priority of 0 (and up to 19) and root to -20. Lower niceness processes are given more priority by the scheduler. (I think the idea here is that a process that you don't really care about -- i.e. one that would be "nice to have" -- is given a higher niceness to decrease its priority).

For gnome, it /may/ help to renice the gui to a lower niceness. This is quite easy to do; e.g. sudo renice -3 -p $(pgrep Xwayland) && sudo renice -3 -p $(pgrep gnome-shell). Again, similarly to the above, nice will start a process with a specified niceness; but here you need to specify it with a - beforehand -- so that nice -10 /path/to/zoom would start zoom with a niceness of +10 (and nice --10 /path/to/zoom with a niceness of -10). This also /may/ be a better way of going about it.

This might be an issue with firefox or chrome/chromium is running in the background. Or, any else app is eating the RAM or CPU. Check the process in System Monitor and kill the process

Not the answer you're looking for? Browse other questions tagged firefox cpu-load zoom-meeting or ask your own question.