How do I prevent skype from starting another instance when it's already running?

This problem is finally fixed with Skype 4.0.0.7 for Linux. This makes the question obsolete for every one who installed Skype directly from the website. Version 4.0+ will be included in the universe repositories for Quantal (Ubuntu 12.10). 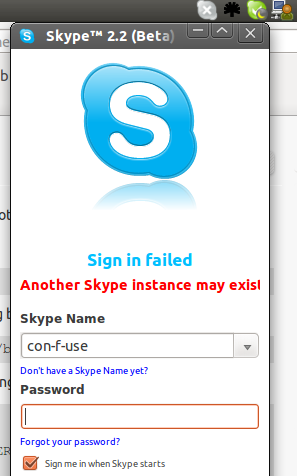 Suppose you have Skype for Ubuntu running. You accidentally click on the launcher again. The way it is now, Skype starts a second instance, which promptly tells you it can't log in. There is another instance already running. To make things worse: On the next regular start of Skype it you will have to re-enter your saved password, due to the "Sign in failure".

I thought this would be fixed soon but neither Canonical nor Microsoft care enough. The annoyance continues to exist for the last three updates at least. So in an approach to provide a workaround I will post what I've done to prevent this behaviour. Maybe it's useful for some of you. Maybe it will rise awareness and cause a fix.

I'm happy for any better solution btw. and that's the real purpose of my question. Usually I don't answer them myself. So doesn anyone know of a better solution to fix dual instancing of Skype?

So here is what I have done to prevent Skype from starting another instance:

I have renamed the executable:

The original skype executable will be linked to a script that only starts skype if no other instance is running (here a softlink). Here is the small script that I called skype-wrapper.sh. It checks if the user is already running skype:

You can link it to the original name of the skype executable like this:

That of course has one drawback: After a Skype update one has to redo the renaming of the executable and linking of the script.

Again, open for a better solution or even a fix of Skype itself (looking at you Microsoft :-)

Edit: As said in the comments, there was a minor problem with the notification icon of skype (a click on it wouldn't toggle hide/display of the Skype window). That is now fixed (and tested with Ubuntu 10.04, 11.04 and 12.04).

Edit2: With the latest version from www.skype.com (by the time of writing it was 4.0.0.7), as opposed to the one currently in the repositories, the error is fixed. I expect that the fixed version at some point will find it's way into the Ubuntu repositories.

Not the answer you're looking for? Browse other questions tagged skype or ask your own question.

1
Skype prevents login because it believes another instance of Skype is already running
4
Can't log into Skype: complains of the existence of another instance when there isn't one
49
How can I prevent Skype from starting automatically on boot?
0
Why does Skype obsolete so many Java packages and how can I have both?
1
Skype snap not starting, just blinks and it's closed
0
Skype ALSA audio distorted