On the new Ubuntu Server 20.04 I was unable to create an encrypted partition with "RAID + LVM". The installation process finished correctly, but at the startup GRUB wasn't found, and I was redirected in the "GRUB minimal bash".

Here I will describe how I proceeded during the installation. First, I have prepared both the hard drives (SSD in my case) using "GParted Live" (I created a bootable USB with the GParted ISO):

Then, using the "Custom storage layout" during the Ubuntu Server 20.04 installation:

I experienced a similar problem. After no luck with various permutations in a VM I stumbled across this thread on Reddit, where user wRAR_ says '[Debian installer] currently doesn't support encrypted /boot'. Ubuntu is based on Debian; I don't know to what extent the installers are similar, but I tested both in a VM, with and without encrypted /boot. Both failed to boot, presenting the GRUB shell you describe in your question.

Broadly this means, if we want some kind of encrypted LVM ontop of RAID, there are two options:

Option 1 - what I chose to do, and is more beginner-friendly since it can be accomplished with the standard Ubuntu installer.

Encrypt everything except /boot and /boot/efi

All user data will be encrypted, but the entire contents of /boot (not just /boot/efi) will not. The partition scheme you describe is different, but the key thing is that - for this to work - /boot should not reside on an encrypted partition.

I used the following partition scheme:

I was able to accomplish it all in the installer:

Of course you can choose whatever logical volumes you like inside the volume group: I have a separate /srv for a server setup.

One small advantage of this setup is it makes use of both the 512M unencrypted spaces - unlike the typical scheme of encrypted LVM on RAID1 - with just the efi partition unencrypted. It's not ideal, but I tested it and it worked for me.*

Option 2: There may be a way to circumvent the installer not supporting encrypted /boot by dropping-out to a shell, editing some configuration files and reinstalling GRUB among other things. This blog post seems to have some instructions but I haven't followed them.

*(Although I must say I found the installer's partitioning menu a little awkward in places - it seems to automatically grab certain unformatted space assuming it can use it as the EFI partition; but with a little 'gaming' of the options I got there in the end)

Thank you @jdurston for your reply, I was able to install Ubuntu 20.04 with RAID 1 and encrypted disks in this way.

I have prepared both the hard drives using "GParted Live" (I created a bootable USB with the GParted ISO):

Then, using the "Custom storage layout" during the Ubuntu Server 20.04 installation:

Image 1, before the RAID creation: 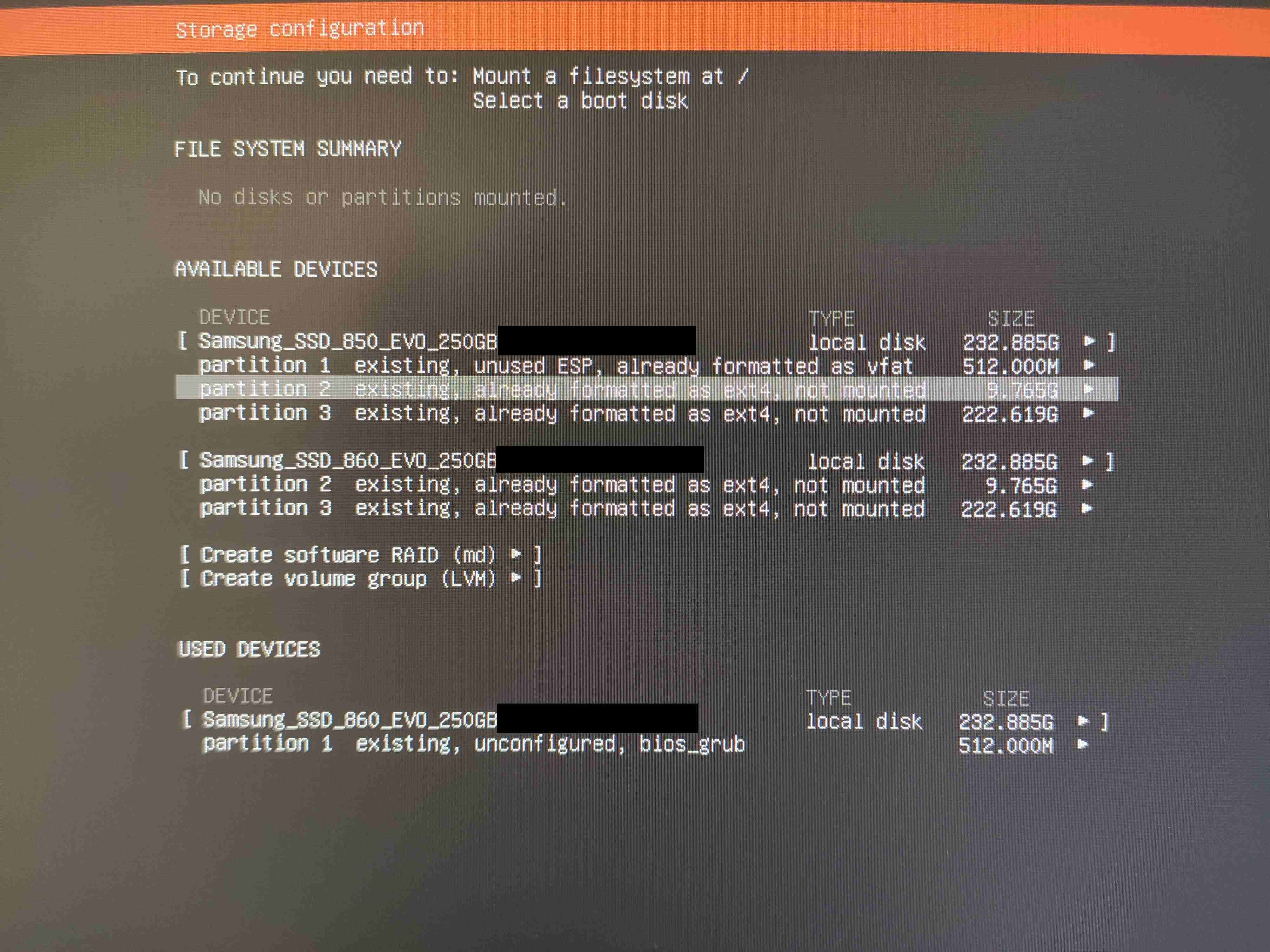 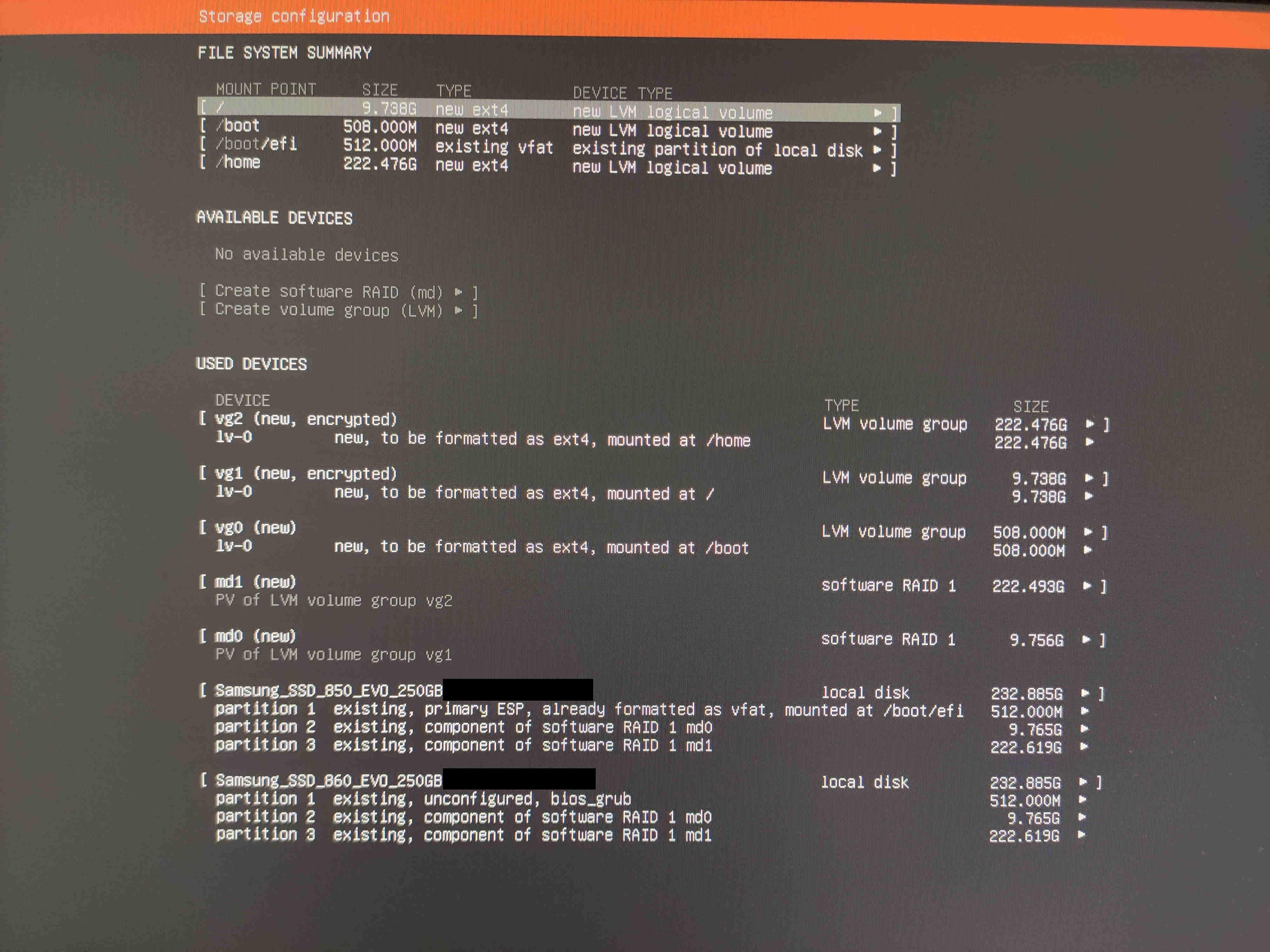 I propose a different approach.

It is true that you cannot configure at first grub to activate and boot from a encrypted partition (although you could insmod and configure grub to do so...). Therefore, I suggest the following configuration scheme:

By doing this, you have a different partition/RAID configuration for /boot and the encrypted partitions. Do not forget to grub-install on sdb afterwards in case your sda fails.

Not the answer you're looking for? Browse other questions tagged server partitioning 20.04 encryption raid or ask your own question.