I recently upgraded my Lenovo PC (16-GB RAM; 2TB-HD) from Ubuntu 18.04 to 20.04. I had saved the ".bitcoin" directory (and subdirectories and files) to an external hard disk drive. Since then I have not been able to run Bitcoin Core successfully as I was able to in 18.04.

I installed the Bitcoin Core using the Ubuntu Software app in Ubuntu 20.04, and then substituted the new files with all the files in the backup of ".bitcoin" directory (along with all the saved subdirectories and files). I did this so that I would not have to rescan the entire blockchain which takes up to 2 weeks these days.

Now the Bitcoin Core starts fine, but gets stuck on "rescanning". I aborted the process after 3 hours and attach a screenshot of the message I was given which was: Error: Failed to rescan the wallet during initialization. 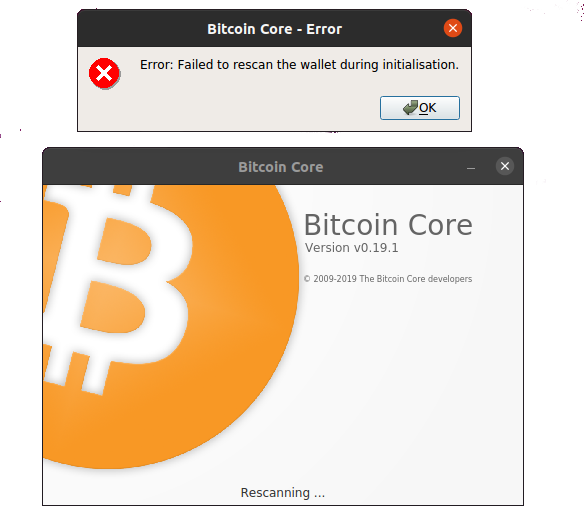 Solved the problem with patience! The rescanning took 5 hours! After that, worked fine.

Not the answer you're looking for? Browse other questions tagged bitcoin or ask your own question.