Terminal not taking the full input of a directory

I am trying to understand the functioning of the Build Systems of Sublime Text 3. The commands going into the shell_cmd are the ones which will go directly into the terminal, but the terminal shows "No such file or directory exists". Here's the build system I made. 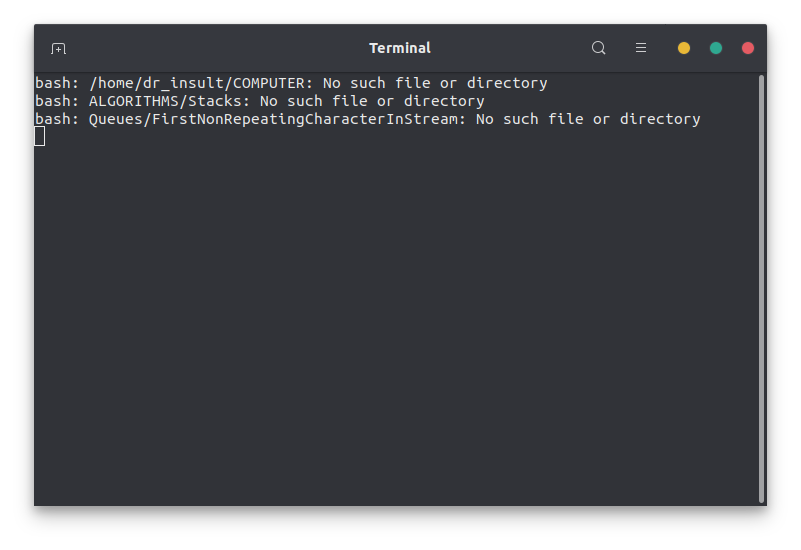 The actual file path is : '/home/dr_insult/COMPUTER PROGRAMS/DATA STRUCTURES & ALGORITHMS/Stacks & Queues/'. I know that it is caused because there is a space between words, but shouldn't that have been corrected by the '' quotes in the build system?

Your issue is that you need to encapsulate your path with quotes. It may look that you already are, but I guess you are getting confused by the number of "string in a string" you have.

Starting with your JSON, you are passing the value of the shell_cmd key to your program which is:

That command is starting the gnome-terminal application and asking it to run the following command on startup:

That command, in turn, is executing bash and telling it to run the following command - Take note of the non-existing quotes:

Before running, that command will replace the variable with their appropriate value before being executed, and according to the error message you showed, the command is becoming the following:

Finally, what is happening, in this case, is that bash is parsing that command by splitting it on the & character as it thinks it should run several commands in the backgrounds like so:

All of those paths don't exist in your system, which it raising those errors you see.

What you need to do is to quote your that command in order to tell bash to treat all that string as a single path.

Try to use script for testing:

Test it using a new instance of gnome-terminal:

In my case it works without issues.

Not the answer you're looking for? Browse other questions tagged command-line bash gnome gnome-terminal sublime-text or ask your own question.