How to remove transparency from a GTK theme?

I'm running Xubuntu 11.10 and I've got this here GTK theme which is pretty nice, and I like the title bars and everything, but I've got a problem.

Every menu in the entire system has this weird and annoying translucent effect. I don't want this effect.

I've pored through the gtkrc for the theme for hours now and turned up nothing, I've googled and googled, I've tried editing the pixmaps to remove the transparency but nothing I do makes any difference.

Does anyone know how I can remove the transparency from this theme?

Here's a pastebin of the gtkrc if it helps: http://pastebin.com/QVa6LPZN

Below is depicted a screenshot of the problem, demonstrated using a pop-up menu. Note that it applies to all menus - application menus, the main application menu and pop-up menus.
Background faded and image zoomed/cropped to highlight the issue, otherwise unedited 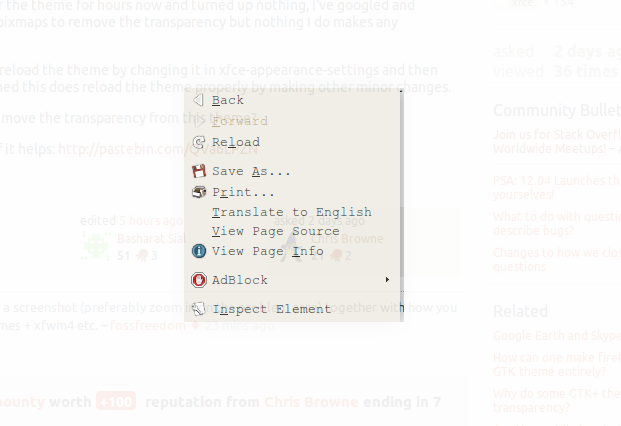 As you can see, the page behind the menu is visible through the menu - this is what I do not want.

How I installed it:

I then used xfce4-appearance-settings and selected Fawn from the menu. 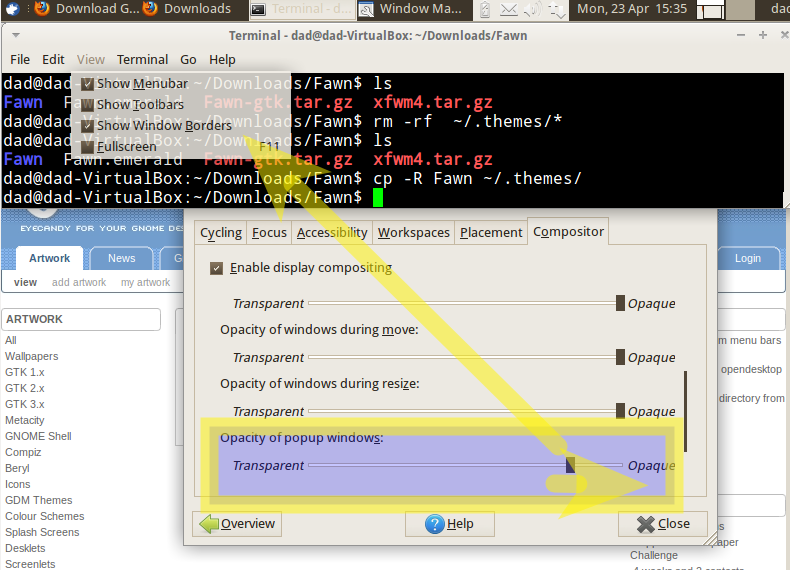 Not the answer you're looking for? Browse other questions tagged themes gtk xfce or ask your own question.

6
How does one retheme the Unity Panel with GTK?
1
How do I use the Equinox theme?
5
How do I get same scrollbar style for gtk-2.0 and gtk-3.0 apps?
1
Editing Raleigh GTK theme
11
Change GTK+3 icon theme for a specific application
0
How do I theme the whisker menu in Xubuntu 16.04 LTS?
1
Xubuntu 18.04 - Whisker menu and xfce4-indicator-plugin in xfce4-panel, don't match Gtk theme Configuration