I have a variation of this question with some additional details. My script is being run by the cron job, but it's not doing the SFTP and not logging like what I hoped for. When I check where it's supposed to be sending the files, they are not there. The files only appear there when I run manually, and not when run in the Cron job.

First in the cron job itself (I've tried with both my user and "root"):

and secondly in the script to log.txt.

When I run the script myself, the log.txt gets populated, but it is never populated when I run with the Cron job.

I know the cron job is running, because SftpScriptLoop_cron.log gets created, but it's empty. I deleted it before testing again just to verify.

My Bash Script (it uses a "here doc" to pass data to the stdin of the SFTP command):

Part 2 - when in doubt simplify. Updates one day later.

I liked the answer from this question, but I cannot even get the following to work.

I created a bin directory (not sure if that is required, as originally my directory name was "scripts".)

I created a bash script called TouchFileCron1.sh with just the following one line:

I created a bash script called TouchFileCron2.sh with just the following one line (trying to figure out if the /sh/bin is required or not in the crontab):

The /etc/crontab now has two lines as follows:

Basically, the first one works, and the second two do not work.

Result - tail of /var/log/syslog - and listing all my files. You can see which ones are marked as executable. The TestFileCron.txt has the date/time changed every minute. The other two are unaffected.

Does the ownership matter, since I'm running "root" in the crontab? 17:28 was the last time the cron ran, when I took the screen shot. The other files remain at 17:22 when I created them. 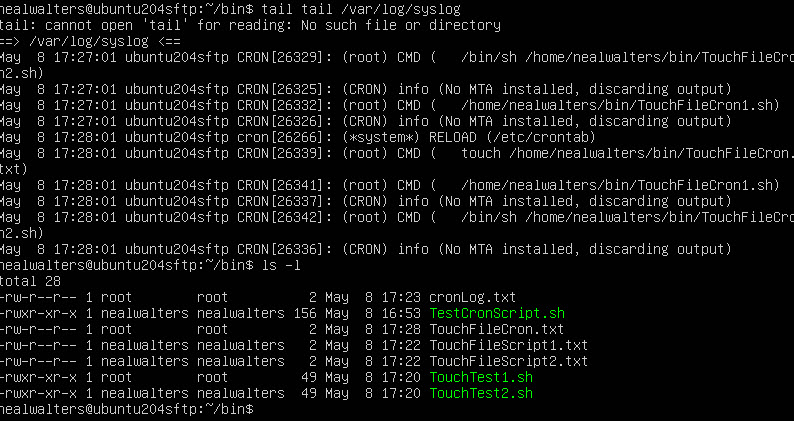 Since I was redirecting output to files, I thought my case was different, but it was essentially solved by this post: "(CRON) info (No MTA installed, discarding output)" error in the syslog

I didn't have any redirection for "stderr".

Coming from a Windows background, it was just incredible to me that mail would be used to log error, rather than writing them to a file.

Linux uses mail for sending notifications to the user. Most Linux distributions have a mail service including an MTA (Mail Transfer Agent) installed. Ubuntu doesn't though.

You can install a mail service, postfix for example, to solve this problem.

Then to view the errors:

(where nealwalters can be substituted with your user).

Not the answer you're looking for? Browse other questions tagged bash cron 20.04 sftp or ask your own question.

4
Cron job not working properly on start up
1
Cron job fails to run python script
1
Bash script and created processes
0
SFTP in a cron job
1
No logging output for cron job
2
How do I get cron to run my bash script which references node?
1
cron job not running bash script