I have installed ubuntu 20.04 on my laptop specification are intel i3 6th gen with intel graphics card 520,screen resolution 1366×768. when i lock desktop to temporarily turn off the screen but when i press power button to wakeup the screen my screen flickers continuously, this issue occurs only when locking the desktop or when screen goes off automatically. I had same issue with ubuntu 18.04 version and kali linux. But when i downgrade ubuntu to 16.04 it was running fine and same with kali linux when i installed slightly older version of kali linux it was also running fine. I am having this issue with only newer versions of ubuntu and kali linux. I have tried solution of 1)reducing screen size 2)installing older kernels

And also when i installed ubuntu 20.04 on my friends laptop it was also running fine in his laptop, specs are i5 8th gen nvidia graphics card,screen resolution 1920×1080

I also had the same problem with a fresh install of Ubuntu 20.04 on my desktop with Intel Corporation UHD Graphics 630 graphic card and 2 Iiyama North America 27'' screens (see the attached image to have a feeling of the flickering I was experiencing).

My problem has been solved simply (thanks to Daniel Van Vugt) by using Wayland display server on the logging screen: Click your profile > Click the white wheel in lower right corner > Choose 'Ubuntu on Wayland'.

This change replaces the use of the xorg display server which seems to make a lot of arguing on the web. I have to admit that explaining exactly why this solves the problem is a bit out of my league, but I let this to other Linux experts in the community. You can also find deeper technical explanations of xorg/wayland by following these links:

Try this one it could help you out: flickering screen ubuntu 18.04.1 LTS

Now save the file. Open your file manager with root privilege (sudo -i nautilus for Ubuntu). Paste the file in /etc/X11/xorg.conf.d Create the requisite folders if they don’t exist. Restart the system after it’s done.

If you experience issues like pixelated graphics, corrupt text, etc. after this, replace the word sna with uxa within the text.

Changes on x11 parameters do not work. What works for me is to change the rasterization settings in chrome. Open the flags page in chrome: chrome://flags, then change the "GPU rasterization" flag to "enable". To be redone after each chrome update.

I was experiencing a continuous small-intensity flickering after a clean install of Xubuntu 20.04 on my laptop (nvidia-driver-455 installed from the graphics-drivers ppa). I think I have solved it by applying the settings below in NVIDIA X Server Settings (toggle first the Advanced view) and clicking Save to X Configuration File. Hopefully, it can be of help. 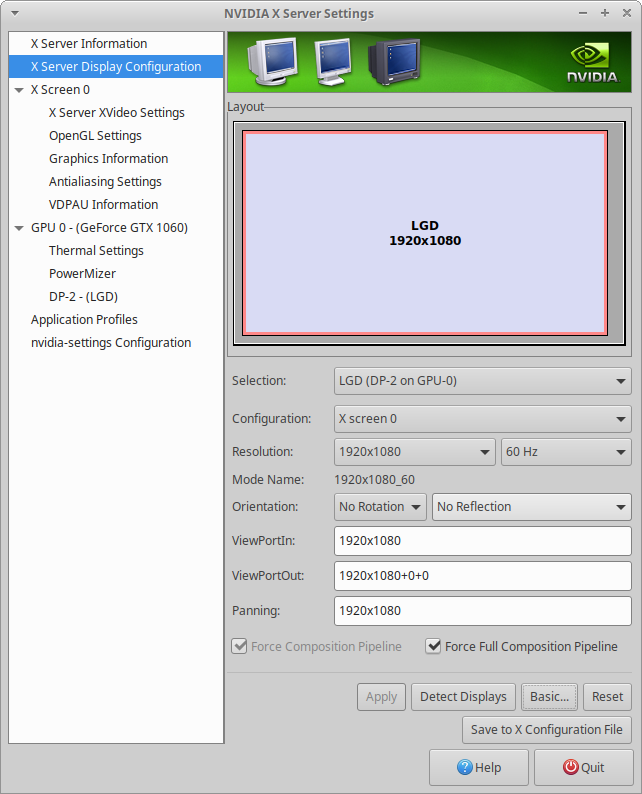 I had the same problem, but in my case I went to boot menu, I selected the same drive containing my ubuntu OS, then selected ubuntu boot advanced option, chose repair packages. This fixed the whole flickering issue.

I installed Xubuntu 20.04 on two seemingly identical Compaq CQ60 laptops, and it worked flawlessly on one of them. The second laptop had a flickering screen problem right away. I tried reinstalling, changing the resolution and refresh rate, using the Nvidia third party driver (even worse), installing gnome desktop, changing to Wayland vs Xorg, and nothing worked. Once my screen started flickering, I usually had to reboot.

The last thing I tried appears to have fixed the problem… Assuming these AMD Sempron laptops with 3GB of memory are very low on resources, I turned off the compositor by navigating to Settings Manager, Windows Manager Tweaks and unchecking Enable Display Compositing. So far, a week later, I have had no further problems.

Not the answer you're looking for? Browse other questions tagged login-screen 20.04 flicker or ask your own question.