Why is there two instances of “Okular” and how do I get rid of the other one?

I have noticed that when I do a program search in Ubuntu 20.04, there are two instances of the program Okular. One with an icon and one that has the generic application icon (gear). I installed Okular from Ubuntu Software. This doesn't seem to happen with other applications that I have also installed from Ubuntu Software. I'd search this on Google myself but I'm not quite sure how to describe this issue. Any help would be appreciated. Thanks.

I should note that this was a fresh install.

Links to relevant screenshots... (I don't have 10 reputation yet to embed images) 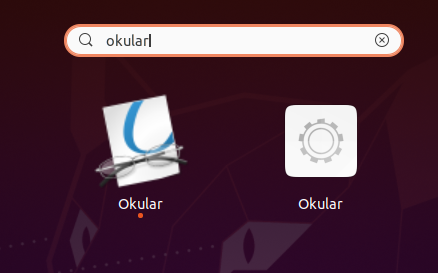 After installing okular as a snap package, I see two icons in the Whisker Menu launcher: one seems to represent okular and the other is generic but both show the same tooltip (Universal document viewer).

I ran locate -i okular | grep -i desktop to identify the corresponding .desktop files. (Ubuntu users may need to install the mlocate package to access the locate command.) There were several hits but

As you can see from the output,

Now, there's just the one "okular" when one types oku in a launcher's search bar:

A bug has been filed.

You guys are seeing that other part of okular because it conflicts the already present Evince PDF Reader package in Ubuntu and all the derived distros. If you save that other icon in utilities and remove Okular.. you will see Evince PDF reader icon appears at that place.

Not the answer you're looking for? Browse other questions tagged gnome software-center snap 20.04 okular or ask your own question.

1
How can I get snap icons to use my icon theme and not change back after updates?
1
When I install KolourPaint why does it have two icons? How can I fix it?

2
Is there a way to use firefox favicons with alt-tab?
2
How do I change the volume control icon?
2
How do you get past “snap kde-frameworks-5” issue to run Okular?
10
State of Okular in Ubuntu 17.10?
5
How to distinguish between snap and normal application in “Activities”
2
two different gnome-software stores - same os Xubuntu 20.04lts - starting snap-store starts gnome-software?
0
snap vs apt icons and names - look the same
0
Snap creating a symlink to home folders? Is there a way to turn off these links?