TLDR: BIOS flashing resulted in kernel panic missing init, including for liveUSB, i.e. no way to address with BootSectorFix / BootRepair. How to find init / rebuild MBR?

having a nightmare today. Attempted to update flash my BIOS using file from motherboard manufacturer website, which 'worked' but then bootlooped. I then tried to flash back to my previous BIOS version but that's not available on the site so I had to go back a few versions then back up. The BIOS manager seemed to save one of the later versions, preventing updating, blah blah, it's a mess. Anyhow, I was at v42a, then 50a, then 31, 42d, and now finally 41 stable.

for a while then

This is AFTER I added "init=/init" to the kernel options in grub, during the previous boot attempt, but I didn't add anything this time.

Trying the same kernel with recovery mode (again, no init specified), hangs at new serial device found, my 5 year old mouse. This is the first time I've seen this issue.

So I guess my init line is wrong.

Various threads recommend disabling secure boot but I don't see that it's enabled. Many more suggest options which require booting into the system (!) or into a liveCD. I made a liveUSB of xubuntu 20.04, try Xubuntu without installing (safe graphics):

But this is a liveUSB?? Prior lines of interest were

This suggests that the problems are from windows trying to fix itself and messing up grub/mbr but I'm not sure. I don't know why that would affect a liveUSB...

This suggests it might be a problem with my liveUSB build & I should try Rufus not Tuxboot. Just tried that:

Some bad messages (went by too fast), then gets to xubuntu splash screen with rotating circle which stops at maybe 15%. This happened before with my previous liveUSB attempt (17.04). Then upon retry it hangs at the same message as before, no cpio magic, no working init. Other options include inspecting UEFI firmware which hangs and reboots. Before I had the chance to select a different option in the third try it had selected the default option (try xubuntu).

I don't have 5.4.0.26 kernel installed on the machine though maybe that's the liveUSB kernel.

then pauses for ages. Not sure if it's doing anything. Eventually rebooted. While waiting I looked into the Initramfs unpacking decoding issue, some recommend adding nomodeset to the kernel entry but it's enabled by default in the liveUSB's safe graphics entry.

Found out that csm was secure boot. Disabled that, tried booting into normal ubuntu (non liveUSB). Pauses for ages at [end trace] then continues; made some progress:

gave up waiting for root file system device. Common problems: ... ALERT! uuid=# does not exist. Dropping to a shell! (initramfs)

Possibly I have a bad superblock.

I didn't touch anything & looked back over and it was back at the idle task kernel panic error. Rebooted, missing init kernel panic error. Tried default xubuntu without installing liveUSB, blackscreened before I could hit enter (BIOS still buggy?). Rebooted. Tried the same, faster. No working init error. So maybe the csm/secure boot has fixed the initramfs error but dropped it down to only the missing init issue which still affects the liveUSB. Trying liveUSB safe graphics just to be sure, blackscreened. Powercycled, tried again, no working init bug.

AHCI already enabled for SATA (i.e. not RAID). Disabled csm AGAIN in bios (not sure why it reverted) and tried normal boot again. Gets further (coloured text),

If anyone has any ideas I would be very grateful indeed. LiveUSB solutions & Installed solutions fail because of the init location bug.

I can't enter commands anywhere other than kernel options and (once) an initramfs busybox.

Thanks so much in advance.

This also killed my dualboot win10 install but I figure if I can get xubuntu installed, I can worry about windows then.

Kernel panic, not syncing, fatal exception in interrupt, shutting down cpus with MMI

Trying BootRepair again with default settings, says BootRepairDisk for a second in blue then:

(A bit part of why this bug report/help request is such a nightmarish mess is that the error message is regularly different the second time I do the same thing). 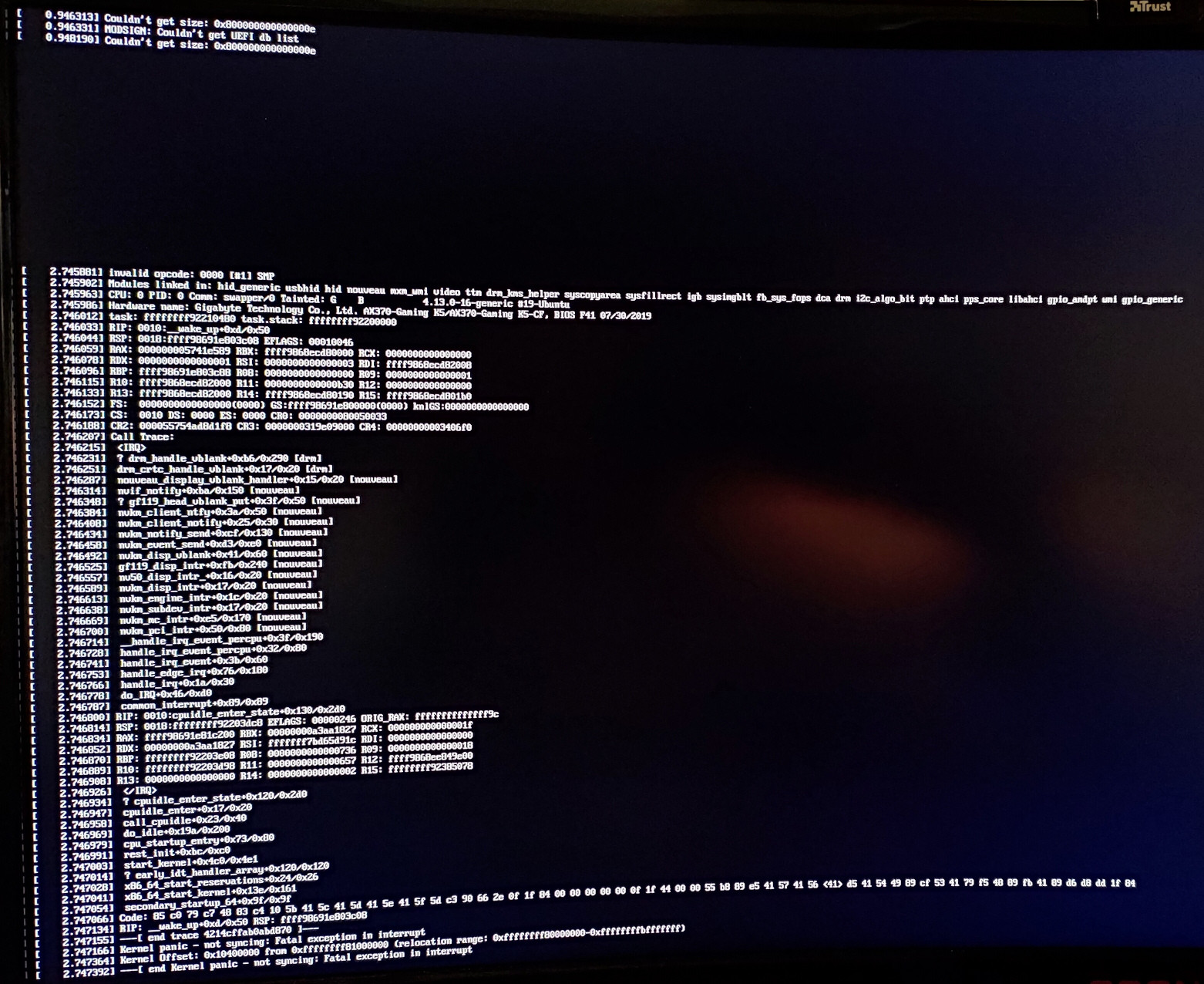 Retrying default ubuntu, which has these settings:

Results in the "attempted to kill init" flavour of init fail:

Retrying, hung in BIOS. Has blackscreened a few times rebooting & not getting to BIOS. Given these issues were almost certainly caused by me flashing the BIOS and scrambling MBR?init locations, I'm loathe to suspect hardware issues, but could this be a motherboard issue? I've had rare but intermittent hangs since I built the machine, have RMAd a few memory stcks but maybe it's other hardware?

Completely out of ideas. Bounty added. Please help, anyone.

I bought a SATA connector, plugged the SSD (which is the booter for linux & win10 on 2 partitions) into my working laptop, backed up files, and can investigate the drive. But I'm not really sure what I'm looking for in terms of signs that things are wrong. grub.cfg's root UUID matches the drive name listed in Thunar. /sbin/init is a symlink to lib/systemd/systemd which doesn't open with mousepad for investigation. No reason to assume this is 'wrong'? With gparted I can 'check' the boot partition: check and repair filesystem (fat32). Not sure whether this is a good idea? Did it, performed fine. Ran TestDisk: 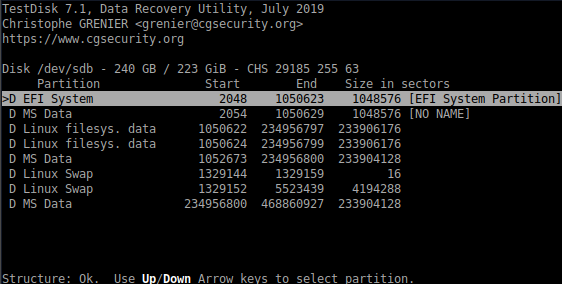 Looks fine? Installed Boot Repair, but it doesn't look like there's an option to analyse the secondary drive's boot sector, and I don't want to risk messing with my laptop's boot sector. Pastebin for boot-repair check. Perhaps the most important looking bit:

=> No boot loader is installed in the MBR of /dev/sdb.

Windows not detected by os-prober on sdb3

Sounds bad. But a later problem. However:

Suggested repair: The default repair of the Boot-Repair utility would purge (in order to fix packages) and reinstall the grub-efi-amd64-signed of sda1, using the following options:
sdb1/boot/efi, Additional repair would be performed: unhide-bootmenu-10s fix-windows-boot use-standard-efi-file restore-efi-backups

I REALLY don't want to mess with sda1 AT ALL.

Final advice in case of suggested repair: Please do not forget to make your BIOS boot on sdb1/efi/.../grub*.efi file!

In putting the SSD back in I noticed that the CPU/DRAM lights were blinking on some boot attempts. After some googling, this and the above regular changes in boot problems, sluggish booting, regular hangs at bios, blackscreens etc, get me thinking maybe it's a hardware fault concealed by my boot flashing. Indeed I'd had intermittent hangs since I built the rig. Removed 2 mem sticks & it booted, very sluggishly, stopping for long periods at random periods in the boot log. Now typing from that machine. Will attempt to debug hardware. I suspect it's the motherboard.

As this also affects Live environments, it's most likely a Hardware issue, and not caused by Ubuntu itself.

Since this was after a BIOS flash, i would suspect the motherboard or memory modules.

This might be solved by using known good modules, or re-flashing the bios to the same or newer version if there was an issue with the flash or BIOS files. Download a fresh copy and compare checksums if provided by manufacturer.

Not the answer you're looking for? Browse other questions tagged boot dual-boot grub2 kernel uefi or ask your own question.

310
Boot drops to a (initramfs) prompts/busybox