How to bridge second NIC and VPN with 18.04 netplan?

I have a Ubuntu Server 18 machine with two ethernet interfaces (virtual for testing, but bridged to physical adapters on the host). One enp0s3 (192.168.1.0/24 network) with an internet connection, over which I used pptp-linux to connect a VPN ppp0 (10.0.0.0/8 network), and confirmed working. The other adapter enp0s8 will have some other devices with a network switch, no router/DHCP.

I want to bridge ppp0 and enp0s8 so that these devices act like they were physically on the remote network, using 10.0.0.0/8 IP addresses etc.

Most examples I found seemed to only have one interfaces in the netplan (libvirtd?), so I tried giving it both:

But it seems to not understand this:

Adding ppp0 there gets rid of the error, but breaks the VPN connection. 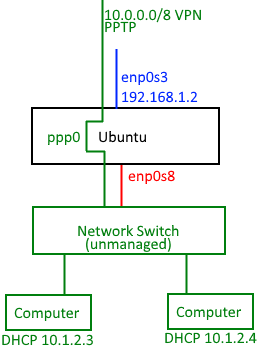 Browse other questions tagged networking 18.04 netplan or ask your own question.