Fan switches between full speed and off on Dell G5

My fans are constantly switching on and off with a period of 30 seconds (30 seconds full-speed, 30 seconds completely off), even without any processor load. This is very annoying, and I'm not sure it's supposed to be this way, since I'd expect a more gradient fan control.

Also, even if I finish the pwmconfig setup and run the fancontrol service, there's no change in the fan behavior. 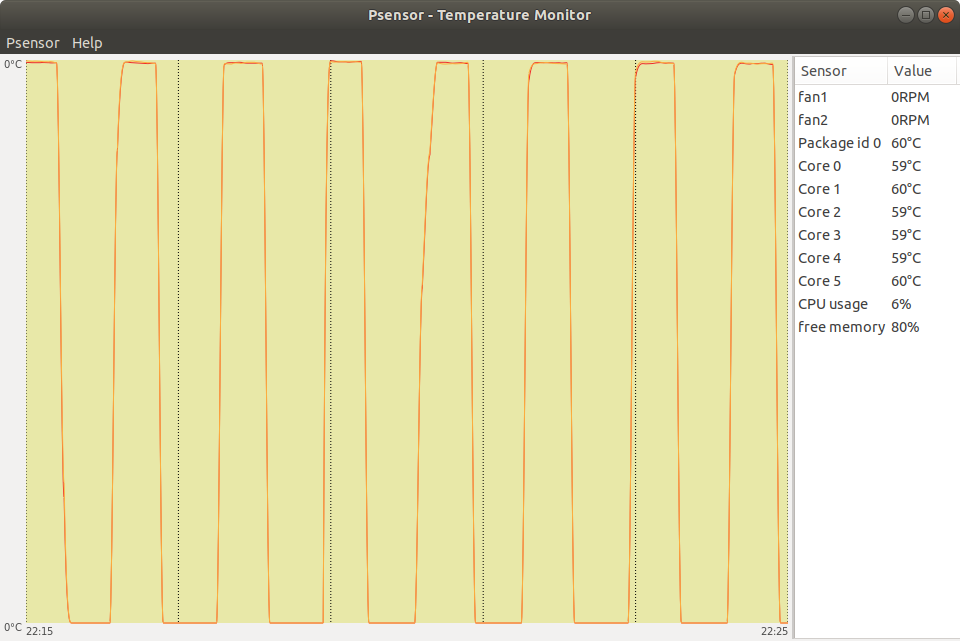 Updating the bios did not fix my fan behavior.

It reduced performance on the processor permanently, though, and for some takes away the ability to undervolt.

Here is how to manually control your fans and set a custom fan curve, instead

As far as I can tell, updates to the bios (at least after 1.10, can't tell you about before that) were mostly to fix intel processor architecture security flaws. The 'fixes' required handicapping the processor in ways that permanently reduce performance, and downgrading is pretty difficult and risky (blocked by dell, requires generating your own fake bios payload to bypass, and may make fingerprint reader never work again). They also, from my experience going from 1.10 to 1.14 following the above answer and the comment on the answer above and other links, do not change the fan/thermal profile of this laptop. 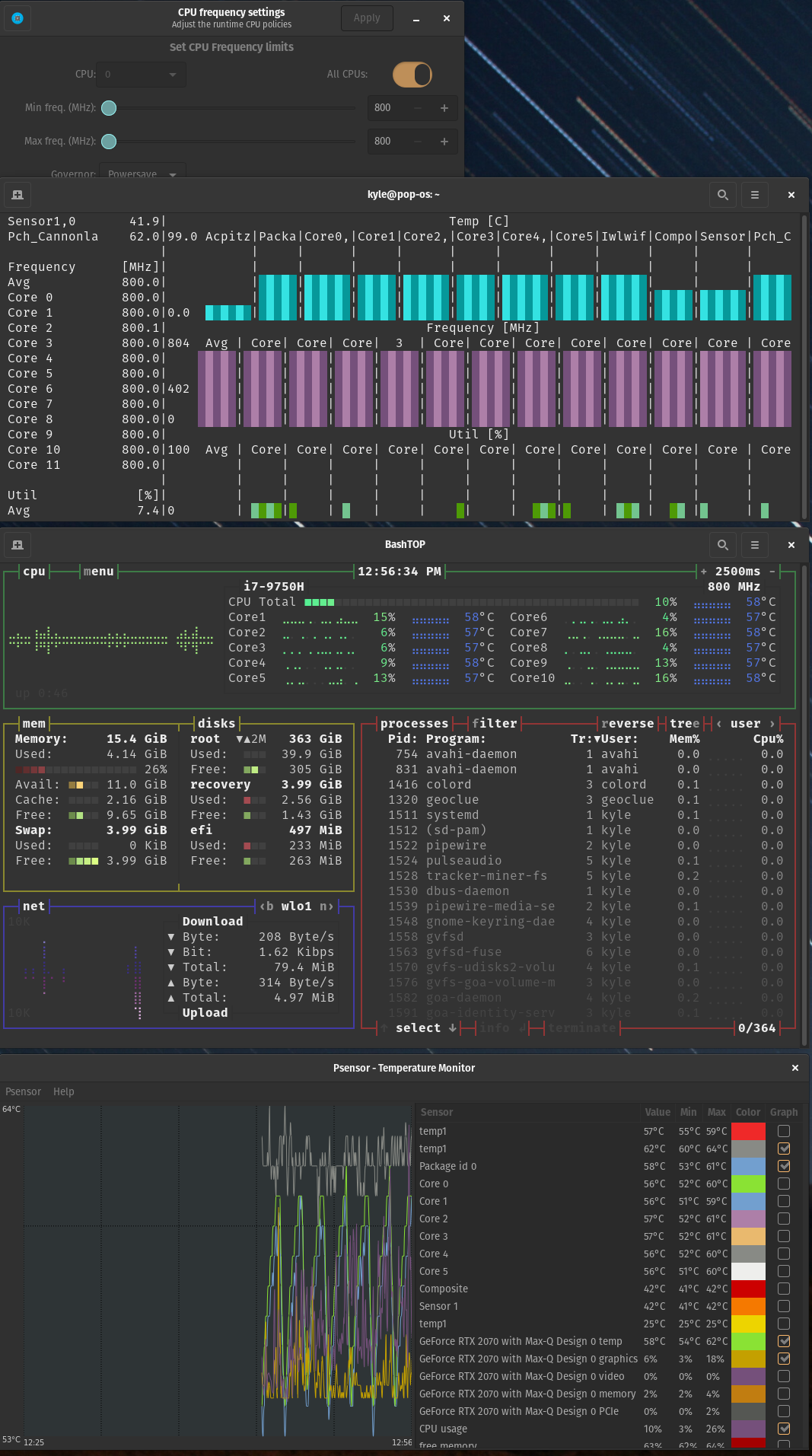 As you can see at the bottom of the image, my temp just swings up and down. At the top of those swings the fan turns on to 'high'/full blast 4700rpm, at the bottom, the fan turns off to 0rpm. Extremely irritating. And identical to what I experienced on bios 1.10.

later update: on this laptop, my problem was using external monitors via the hdmi and miniDP port--doing this causes my temps to go literally 40+ degrees celsius higher, both in linux and windows, seemingly an nvidia driver issue. connecting my external monitors via a usb-c to dual hdmi hub instead allows my computer to sit at 47c with no fans on, at idle after a clean boot.

Dell handicaps the fans and only allows control to specific presets, but they can be accessed to whatever extent possible on your hardware by reading these links:

(update: dell seems to just not open source the fan control, and the reverse engineering work has had limited success; there seem to be more presets available to windows than I am able to access in linux.)

(Note that /etc/i8kutils/i8kmon.conf moved to /etc/i8kmon.conf in later versions, I think, and is what I see now in my filesystem and in the man page. There is also a provision in the man page to specify a conf file in your home directory.)

If you're having problems with i8k not working, you may try this:

You may see better results if you restart your computer, as well.

If you're still having problems, you might check the links referred to above and dig around more with modprobe. this link may also help guide you.

To actually make this go into effect, we're going to need to start the service, and disable the bios control of the fans, which is obviously very dangerous. A processor like this can fry itself beyond repair in 10 seconds of high temp activity, so BE EXTREMELY CAREFUL HERE.

That's probably all overkill, but... if you have an expensive laptop, just be prepared. (Don't be paranoid, though, as there are hardware safety switches that will shut off the laptop to protect itself from overheating.)

Now that you are ready,

ok, we're going to disable the bios control now--fans should go quiet--and then immediately turn on the fans to 1--we're going to test how many fan settings you actually have available to you and make sure this is working.

Run these commands 1 by 1 and pay attention to your system.

Now you'll need to set your fan curve. We do that by editing this file:

Now you're going to have to edit that file according to your computer's heat characteristics. See the man page and documentation as needed. The short version is that the lines in there that say this:

You'll want to adjust these values according to your laptop's thermal characteristics. My particular machine cannot idle below 85, period, so the fans have to always be on, so my curve is adjusted accordingly. Once I repaste, I'll change it again probably to get a silent idle.

(note that the G5 5590 doesn't support power stage three, only up to powerstage 2--still, if you're going to not include that line, make sure you test it doesn't break anything, i8kutils is sensitive about things like that)

To interpret how to write these lines, they mean this:

NOTE: DO NOT ADD COMMENTS ON THE SAME LINES AS THESE COMMANDS, ADD COMMENTS ONLY ON/AFTER NEWLINES. Also, max/min temps set should overlap, preferably by at least 10 degrees or so--see man page if you don't understand why.

(Note that, again, in the G5 (and I think not even in the precision lines, which is crazy), setting fan RPM manually isn't supported, but I think it is in the XPS and Alienware lines--however, that said, DO NOT OMIT THESE LINES. The program will run, but the fans will never spin up!)

which tell us what you see in the comments here. I presume the Alienware ones allow this feature, and the XPS appears to from what I briefly read--however, Dell artificially handicaps fans on everything that isn't their top-of-the-line premium machine--even their semi-premium Precision and G5 (not sure about G7?) lines don't allow rpm setting. nice one, Dell.

Step 4: Fans As A Service

Now, if you've paid attention to your temps in the past, you can try going into the config file and setting it to whatever levels you want, and turning on the systemd service for i8kmon.

Now, we'll need to also add a systemd process to make sure that the bios doesn't take over again when we restart. Following this guide, we'll basically do this:

paste this in there:

You should be good to go. I'd go ahead and restart the computer, though, and make sure that it works as expected. watching psensor should tell you whether it's following your config values or not.

Let me know if anything here doesn't work, I'm writing this in a really out of order way after having figured it out through trial and error. I'm cleaning it up over time as I solidify my understanding of this.

A definite glaring problem is that, for safety, there should be error handling on the launch of the i8k service that turns bios control back on if it fails to start.

Even that wouldn't be a guarantee; I had commented out the 'fan rpm' lines, because the default file indicates they're unnecessary can be probed, presumably automatically, and that feature isn't support on my model (the G5 5590). The service seems to start fine, but will fail to ever actually activate the fans. As a result, I'd also recommend having another temperature failsafe in another application. If/when I get around to doing this, I'll try to update this guide.

If you're dual booting, you won't have any fans running in any other distro where you haven't added manual fan control in--so, you'd overheat and crash. To change that, you should add a reverse process to hand control back over to the bios on shutdown, like this:

Please update from BIOS version 1.11.1 to the latest BIOS, 1.12.0, for your Dell G5 5590 laptop, to resolve the fan issue, since control of the fans goes through the BIOS even though there's no controls you can adjust in it (yet).

The latter assertion is based on the first three posts I found with a web search on the subject, which indicate a problem with users runnint Windows 10 as well as Linux; hence my thought the BIOS is involved.

Not the answer you're looking for? Browse other questions tagged 18.04 dell fan or ask your own question.