My microphone does not work. I've tried lot of thing such as put the line "options snd-hda-intel model=acer-headset-multi" at the botton of the file "/etc/modprobe.d/alsa-base.conf". I've also installed HDAJackRetask and connected pin 012 and 013 to internal mic and bot ovveride. I've set Mic_Boost on alsamixer equal to zero. 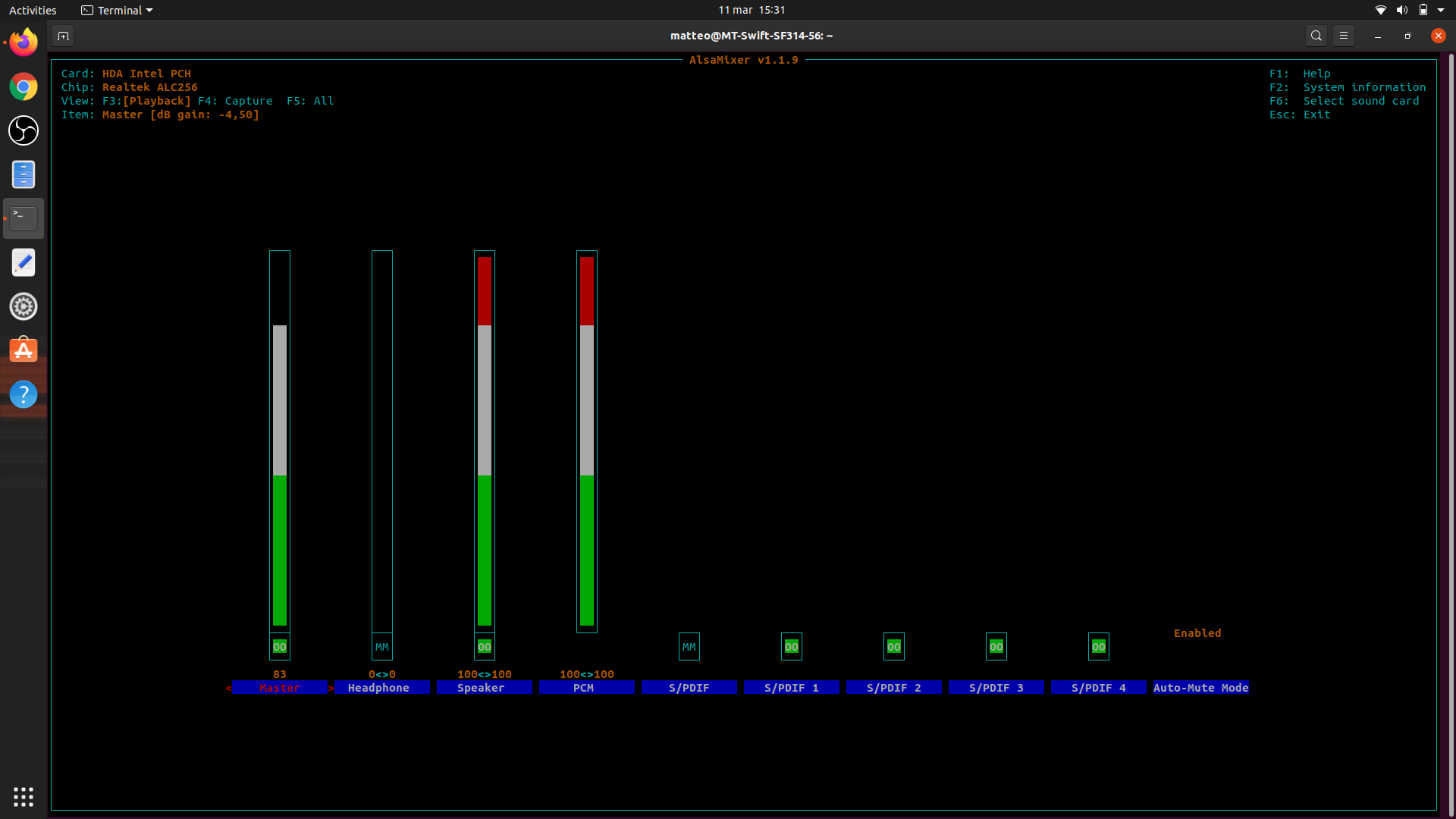 Well, nothing worked. The mic is now not dectected at all. Could someone help me?

I missed an infornation. Ubuntu is installed in dual boot alongside windows 10 (which I use rarely). On windows the microphone is detected and works well.

I have been struggling through this issue for months. Apparently this is a recognized issue with devices using the Realtek ALC256 card (which includes the Acer Swift 3). There is a long thread on something similar on bugzilla.

I finally stumbled across a workaround to enable use of headset mics here: acer swift 3: microphone not working with ubuntu 18.04, to add options snd-hda-intel model=dell-headset-multi to the alsa-base.conf. You can follow the steps mentioned there (I did however have to restart my computer as alsa force-reload did not do the trick for me). This worked for me on Acer Swift 3 and Ubuntu 20

Please note however, the onboard mic will still not work.

Looks like when you are using SOF driver the options snd-hda-intel ... over at /etc/modprobe.d/* have no effect. Thus (from my understanding) why HDAJackRetask won't help.

So based on these findings here is the fix...

For custom-kernel people that is easy: Just add the following line and compile.

SND_PCI_QUIRK(0x1025, 0x1300, "Acer SWIFT SF314-56", ALC256_FIXUP_ACER_MIC_NO_PRESENCE), over at struct snd_pci_quirk alc269_fixup_tbl[] at sound/pci/hda/patch_realtek.c. For the brave ones that don't know how-to compile a custom kernel but willing to here is a cool guide. If you are using secureboot then you gotta also sign it. If you are using ZFS then iirc you also need zfs-dkms.

Then you gotta disable SOF and rollback to legacy driver in order to make options snd-hda-intel ... have effect, however! this results with disabling DMIC. So add options snd-intel-dspcfg dsp_driver=1 to /etc/modprobe.d/alsa-base.conf.

Afterwards you gotta create a patch over at /lib/firmware/, lets name it alc256-sound-patch.fw. Based on this documentation and the observation over at /sound/pci/hda/patch_realtek.c that device Acer TravelMate B311R-3 has the patch we need we paste the following code. If you are using some other device this is a place for some experimentation.

If you want also add options snd-hda-codec dyndbg=+p in order to have some more info over at dmesg.

If anyone know how to use options snd-hda-intel with SOF please let us know how-to!

I am having exactly the same issue. The problem seems to be that the built-in microphones are not part of the Intel HDA, but are connected to another codec. Forcing Linux to enable the (unconnected) microphone input will only result in some hum / system noise. I found more information here:

However, don't get your hopes up; as far as I could find, it has not been fixed yet.

Same Acer swift3 SF314-56 running Kubuntu 19.10 mic didn't work neither. Then updated to kubuntu 20.04 LTS, and after a recent kernel update (I have now a kernel 5.4.0-52-generic), the internal mic started to work with an updated kde sound control applet. Actually that corresponds to a linux kernel switch to SOF (Sound Open Firmware) infrastructure for intel audio. The intel HDA (with underlying Realtek ACL256 for our Acer swift 3 SF314-56) works fine now with new HDMI ouptuts controls (tested on my TV), and 2 new controls for mics (internal digital mic and headphone mic). But I still have an issue for headphone mic. Here an extract of kernel boot that explains the new module mapping :

The linux kernel bug resolution history for DMIC on intel HDA is there : https://bugzilla.kernel.org/show_bug.cgi?id=201251#c116

@pedro-siqueira's answer https://askubuntu.com/a/1307107/1133973 perfectly solves this issue without any further side effects On ALC255

Check this solution out, on a similar question: https://askubuntu.com/a/1406919/1593265 There is a video tutorial included in it too if you want to see the whole process and results beforehand.