how to chat between 2 ubuntu machines in network?

I want to know that how we can chat between 2 ubuntu machines in a network.

there are many messengers but we are prohibited from using those who send the files.

any command line chat messenger for 2 ubuntu in network? or GUI will also work.

The simplest way I can think would be using netcat

try this on your own machine in one terminal:

in the other terminal:

(this will be the client connecting to the server)

try typing in one of the windows. You can select any port you want for client / server, but privileged ports (below 1024) require root access on the server)

Replace localhost, on the client, with the ip / dns name of the sever you want to connect to if you want to try this over a network

Probably not what you're looking for, but you can just ssh in to limited accounts on each others machines and use wall.

@tomodachi suggested using netcat. That is a nice idea, but the disadvantage of a simple nc -l -p 1234 and nc ip.ad.dr.ess 1234 is that text that is being typed gets overwritten by the received messages. Note that by "netcat", I refer to the traditional "swiss army knife" netcat, not the BSD one. netcat-traditional is not installed by default, so do so. You then might want to change the default netcat program using sudo update-alternatives --config netcat.

The basics of netcat is that you open a port that can receive a single TCP connection. When data is received, it's printed to standard output. Standard input gets sent to the other side. In a terminal, standard input and standard output are often displayed in one terminal which makes it possible for the data to get mixed up. For example, when you begin to type "hello", if you receive in meantime a message, the terminal could show "helMESSAGElo" even if you are really sending "hello" to the other side.

By splitting opening two terminal tabs and split the view horizontally, you have can show two different shells simultaneously in one window.

Until now, the steps that had to be executed were the same for both sides of the communication. Now, it gets slightly different.

Screenshots for the host and receiver side: 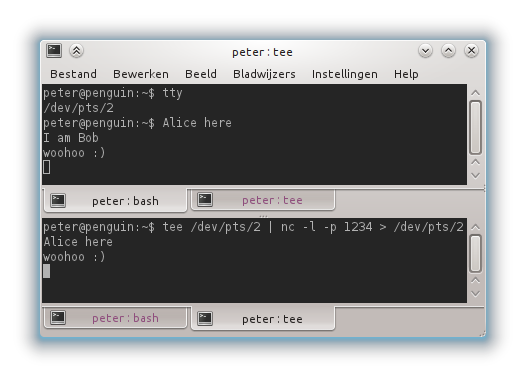 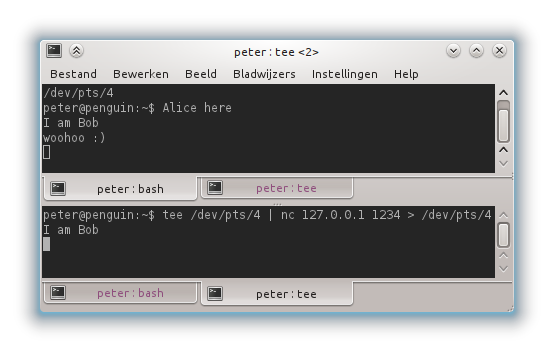 Use Bonjour. It is also known as Link-Local XMPP. It's supported by Telepathy/Empathy and others, like Pidgin. The others do need to switch it on in their clients, but there's no need for any servers or anything like that. It works like normal XMPP, so you can send files, use webcam, etc, too.

In Ubuntu, this is called "People nearby". You add it like any other IM account and it works the same way.

0
Chat over network in linux 5.5 version?

3
Creating & running Windows virtual machines?
8
Available instant messaging clients
5
Is there any way to use Windows Live Messenger in Ubuntu?
81
Is there an offline command-line dictionary?
1
Network Simulator for Ubuntu 12.04
0
What is a web based vpn for Ubuntu?
28
Is there any GUI application for command rsync?
52
'xclip' vs. 'xsel'
3
Are there any packages lets one to learn shell interactively via terminal?
2
Is there GUI software that can show how much bandwidth a user on my home network is using?