How to troubleshoot network problems for virtual machines connected via a bridge (Ubuntu 18.04)

On my server (Ubuntu 18.04 LTS) I am running a KVM virtual machine which has been running fine for over a year or so but recently - probably because of some update - the virtual machine would lose connectivity to the network whenever the host is rebooted. I somehow managed to restore connectivity the last two times it happened but this time I just can't get it to work anymore.

I have read a lot of tutorials and other webpages and it feels like tried everything more than once, but - obviously - I must be missing something. There are just too many variable involved at the same time and many of them probably influence each other. So with this question, I'd like to find the best troubleshooting strategy that will allow me (and others) to effectively narrow down the source of connectivity issues as far as possible. More specifically, I'm talking about connectivity issues on KVM virtual machines that are connected via a bridge on Ubuntu 18.04.

I realize that this question has become extremely long, so let me clarify that you can answer the question without having read further than here.

Under the headings below, I'm mentioning my most important areas of uncertainty that need to be navigated when troubleshooting network issues but there is no need to discuss these in any detail in the answers. Take them as possible starting points.

If you prefer to take the config of a specific machine as your point of departure, scroll down to the bottom where I provide such details (under the My Example heading).

One problem with troubleshooting this on 18.04 is that ubuntu changed to using netplan, which renders a lot of currently available advice obsolete.

It looks like I'm not the only one frustrated with netplan and some recommend switching back to ifupdown, but in order to limit the scope of this question, let's stay within netplan and try to fix things without switching back.

Another difficulty is that there is at least one relevant difference between Ubuntu 18.04 Server and Ubuntu 18.04 Desktop: server uses systemd-networkd and desktop uses NetworkManager, which entails different troubleshooting paths. To make things worse: what if you originally installed the server edition but later added gnome desktop? (I don't recall what I did, but chances are that that is what I did because my /etc/netplan/01-netcfg.yaml says renderer: networkd while I NetworkManager also seems to be running by default.)

My third area of uncertainty is whether I should be fixing stuff on the host or the virtual machine (or when a change on the host also requires a change on the client). I have so far not paid much attention to the vm, given that it was working fine and I never updated it (except for automatic ubuntu security updates). But the last time I managed to fix the connectivity problem, I did so by duplicating its harddrive and creating a new vm (in my eyes identical) with it. I guess this confirms that the config on the vm was fine (since the vms hardware is configured on the host), but it nevertheless told me that I probably need to pay more attention to the vm's hardware configuration.

When trying out different fixes, I am also often unsure whether the

Finally, I realized that it may matter through which UI I make certain changes because they may be writing these changes to different places. I currently have the following interfaces for configuring my vm:

So, although my idea here is to find a somewhat generic troubleshooting strategy, I suppose it is always a good idea to start from a concrete example. So here are some details about my current setup (will add more if requested in comments):

This is my current /etc/netplan/01-netcfg.yaml (and I have no other yaml files in that directory):

virsh net-list --all gives me this:

The bridge I'm trying to use with my vm is br0.

Here is the config of br0: 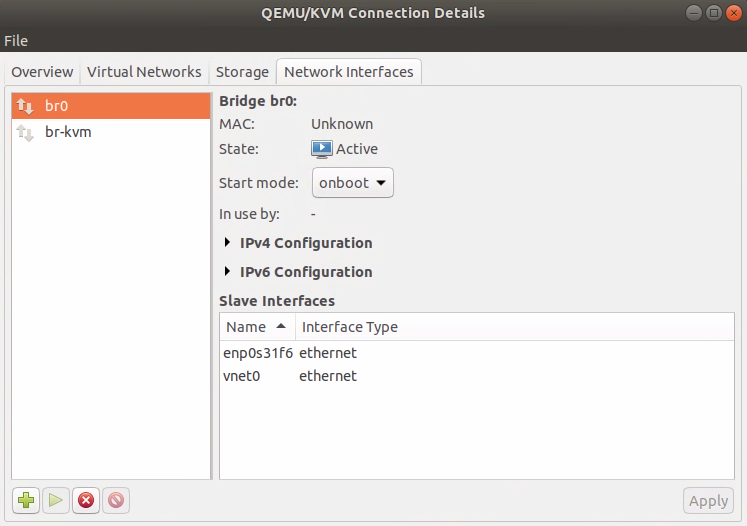 The second bridge was an attempt to start over and simply create a new bridge and connect the vm to that, but adding the bridge had no effect, probably because Virtual Machine Manager seems to write that into /etc/network/interfaces rather than a yaml file in /etc/netplan/

Here is my /etc/network/interfaces:

Note how I commented out everything (to make sure that this file was not somehow affecting my config) only to have it added back at the bottom, as mentioned above.

ifconfig gives me a long list of bridges (most named something like br-a5ffb2301edc) of which I have no idea where they come from (I guess I unknowingly created them in my countless hours of testing). I wont paste them all here, only br0 and the actual ethernet interface:

This is how I have been testing network connectivity on my vm:

Edit: Here is the content of the vm's /etc/netplan/50-cloud-init.yaml:

I cannot recall why I - months ago - commented out the redererer line (nor do I know what default renderer is assumed now), but this exact config has worked.

I can also mention that it occurred to me that cloud-init might be messing things up for me (on the host) so that I checked /var/log/cloud-init-output.log to see whether it was doing anything:

Seeing that it was active I disabled it with sudo touch /etc/cloud/cloud-init.disabled. But my connectivity problem is still not solved.

Edit2: Here is something else I checked (based on this post) is whether the network interface of my virtual machine is still associated to my bridge. To get the name of the interface, i did virsh domiflist LMS (with LMS being the hostname of my vm) and I got this:

It already says br0 there under source, but I'm not sure what exactly that means so I double checked using brctl show br0, which confirmed that vnet0 is associated to br0:

I was so hoping to find vnet0 to be missing so that I could fix it, but unfortunately, that was not the problem either.

50
Ubuntu 18.04: switch back to /etc/network/interfaces
0
Why does host and bridge get an IP but not the virtual machine?

0
12.04 NetworkManager trying to configure eth0 which is on a bridge
2
Cloud in a Box Issue - LXD static host with DHCP bridge and static LXD host reservations
3
Does Ubuntu 18.04 use dhclient?
0
Does apt upgrade trigger netplan apply in 18.04?
3
18.04 server unreachable on secondary network interfaces
0
Ubuntu with 2 static IP interfaces gets 2 default routes