I am in the process of reinstalling Ubuntu. When I got to this step: 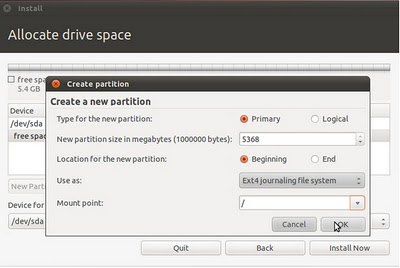 I was prompted to choose a logical or a primary partition. I've never seen this dialog box before -- before it just told me to choose the mount point and the format.

Should I choose logical or primary? The default is logical.

The short answer "it does not matter much".

There's no difference in how they function or anything. So, if you don't have specific reasons, just go with the default choice.

I think the explanation below is too basic for the OP, but I think it could be useful for a beginner.

That choice between "primary" and "logical" has always seemed confusing to me, because the terms are not alternatives (logically, I mean).

For a clear definition of the terms - there is a good answer here.

The difference between "primary" and "logical" is imposed by the limits of the MBR partition scheme, where a drive can only contain 4 partitions. When such partitions are created on a such derive, they are called "primary". In order to go above that limit, there is the "extended" partition, which is different from the primary in that it is not a partition on which you can put things and boot from it, but a sort of container for other partitions, a sort of virtual "drive" which can include more than 4 partitions.

All that is rather clear.

What about the confusion? There is no confusion when partitioning with Gparted or similar tools which provide a choice between creating primary or extended partitions: we are not asked whether we want "logical" ones, because we need an extended one before having a logical one, and when we create a partition within an extended one, the new partition can only be logical.

The real choice is between primary or extended, and that's what we see in a partitioning tool.

The GUI tool in the question is an installer, not a partitioning tool, and the choice it provides can be misleading: if we select "primary", that will result in what the terms says; but if we select "logical", it will create an extended partition containing one logical partition.

2
Partitioning the Rigid Disc to install Ubuntu alongside with Windows 7
0
What's the use of having just one logical partition (an extended partition containing only one logical)?
0
Is it safe to delete an middle partition of the disc for installing Ubuntu (dual boot with Windows 10)?

1
Advice on partitioning 11.10 at Installation time
1
12.04 - partitioning extended to primary
2
Converting Primary to Logical Partitions
0
Primary VS. Logical Types When Using Manual Partitioning At Ubuntu Installation
1
Installing ubuntu on Mac Mini using refind: Do I use Logical or Primary for Ubuntu partition?
0
Too many Primary partitions (MBR) after installing Ubuntu
1
Xubuntu setup not allowing to create an extended partition, limits to four total, no matter if primary or logical
0
What's the use of having just one logical partition (an extended partition containing only one logical)?