How can I install Kubuntu on a Dell Inspiron 14 7490 laptop?

A friend of mine received this laptop for Christmas and wants to use it with Linux. More specifically, we want to install Kubuntu 19.10, but at this point we are getting desperate and would settle for any distribution. The main issue is that laptop has a single SSD, but Linux can't detect it so we are not able to select it in the installer.

What we have done so far

Where we are stuck

The main issue is that the SSD of the laptop is not detected. It prevents the installer from formatting the hard drive and installing Linux. There are multiple reports of people encountering this issue (see links below). I'll summarize my understanding of the situation in this question, and hope to post an actionable solution if we find one.

First of all, some acronyms:

The BIOS menu has a "System Configuration" section allowing to configure how the hard drive is exposed to the OS: "SATA Operations". Here is what this section looks like on this laptop (Bios version 1.2.1) : 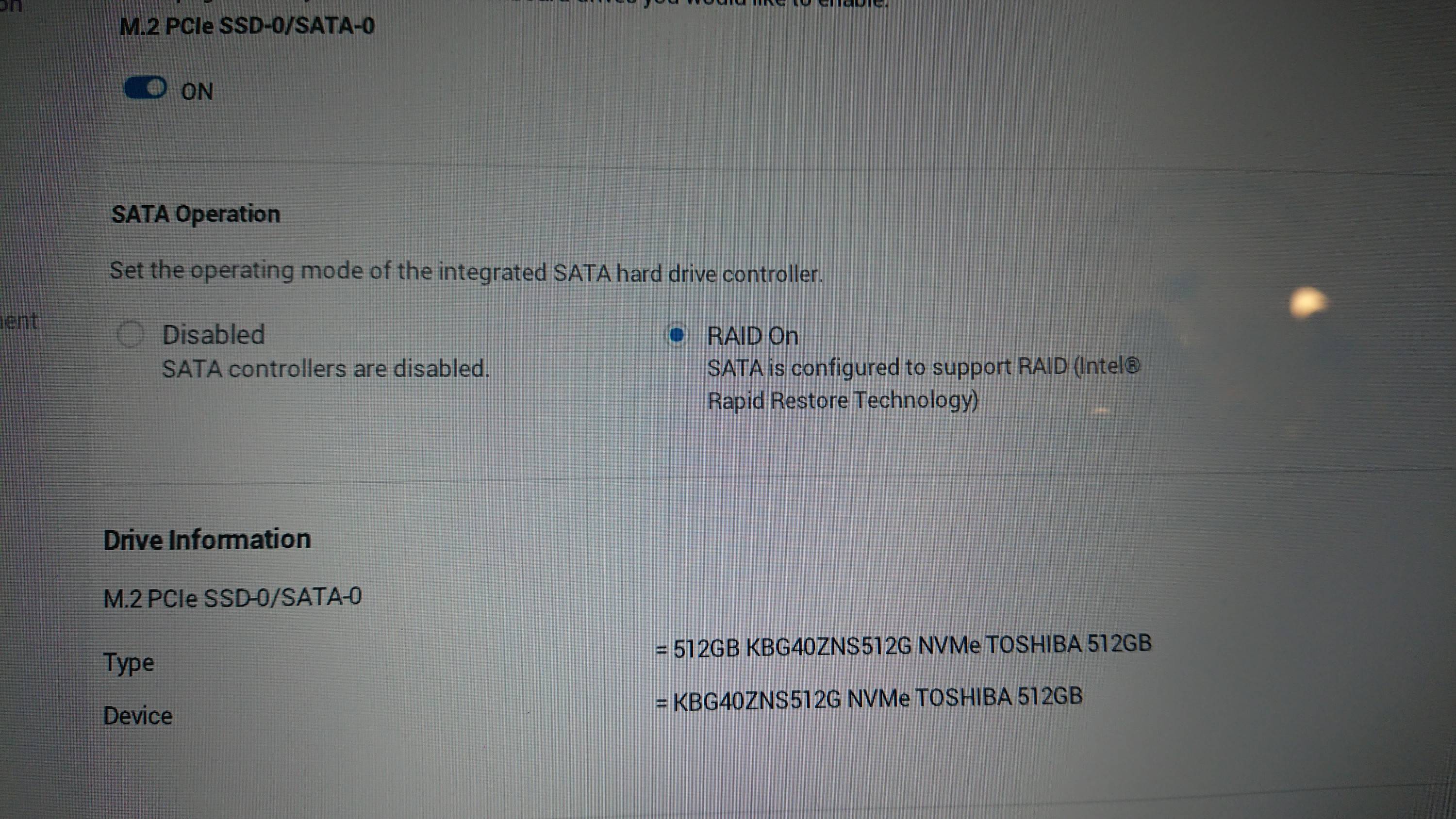 There are two modes:

Previous Dell laptops had a different BIOS. On my Dell XPS 15 9560 I have the following menu:

Linux does not support Intel RST currently and requires the SATA mode to be AHCI. Otherwise it cannot communicate with the SSD. Since direct "AHCI" is not available on the Inspiron laptop, it prevents the installation of Linux.

I've been using Dell laptops with Linux for a long time because because they had the reputation that it would "just work". This reputation played when I helped my friend chose a laptop: I expected the installation to go smoothly. This whole situation where they release a laptop with a new BIOS preventing from even installing Linux severely damaged their image. There are multiple threads on the Dell forums complaining about this issue (here is the most commented on).

A possible solution would be for Dell to simply release a BIOS update that unlocks the "AHCI" SATA mode. It would allow to select this mode and install Linux without further issues. This would be the ideal solution, but I don't know how reactive Dell is about these issues. I don't even know if they'll ever release this kind of patch. Opening support requests about this issue may raise the priority of a BIOS update.

An other solution would be to enable Linux to work in Intel RST mode. The most recent discussion I could find on Linux Kernel Mailing List dates from June 2019. The proposed patch in this discussion was declined.

From what I could understand, supporting Intel RST in the Linux Kernel is hard for two reasons: a complex protocol and lacking documentation. When enabling "Intel RST", the BIOS does in fact exposes the SSD through a "remapped AHCI" that looks like AHCI but does not behave like AHCI. The Kernel can detect that the SSD is in remapped mode, but can't use it. It can't use it because this technology is under-documented currently preventing from them from properly implementing it. In the syslog posted above, we can see the step where it warns that the drive is remapped:

I don't know when or even if the Kernel will add support for AHCI remapped SSD. If more laptops are released where "Intel RST" is the only option, they may have no choice.

I haven't tried the kernel patch. As mentioned above, I am helping a friend who wants to use Ubuntu: since it's not my laptop I prefer to avoid trying out custom patches.

One of the comments to this question mentioned that Intel RST is supported through dmraid. This thread asks to boot into live USB and run the following command before starting the installer: "dmraid --erase_metadata --raid_devices /dev/XdY where X and Y denote the SSDs you're using".

The problem with this solution is that Linux can't see the SSD at all. lsblk only displays loop0 and /dev/sda (corresponding to the pendrive). When looking into /dev, there is no /dev/sdb or /dev/nvmeX drive.

Ultimately my question is "How can I install Kubuntu (or Ubuntu) on this laptop?".

My conclusion is that it is currently impossible to install Linux on this laptop. We have to wait for an update from either Dell or Linux. If someone finds out a solution, please answer this question. I am also disappointed in Dell's laptops and will be more reticent to recommend them in the future.

I have just installed Lubuntu 20.04 on this laptop. It's possible, but not easy.

As you said in your question, there were some patches proposed to enable Linux to work in Intel RST mode. The patches were refused in the official Linux branch, but Daniel Drake, who proposed the patches, is working on Endless OS, a Linux based OS, and they maintain an updated version of this patch in their version of the Linux kernel available on GitHub. This kernel is based on Ubuntu's kernel, and they rebase a set of patches on top of it every time they update it, including the patch to support Intel remapped NVMe devices.

Knowing that, you now have two choices :

Use Endless OS's kernel on Ubuntu

This one is a lot harder, and you need a lot of technical knowledge.

The idea is to pull and build the kernel from the Endlessm repository on GitHub, and use these packages as a custom kernel on Ubuntu.

For that, you have to pull the Git repository :

After a long time, you will then have a lot of .deb files created in the parent directory.

From there, you can use them to create a custom Ubuntu install CD (I haven't done that, but it should be possible).

Or, you can use Endless OS live version to :

You may have to turn Secure Boot off in the kernel to be able to boot on your kernel.

I won't detail the full process, as I don't exactly remember all the steps, but I managed to get a working system with a custom kernel. There were some problems with nouveau when suspending/rebooting, but since I have installed the nvidia driver, everything is working correctly.

Nvme drive is recognized as /dev/nvme0n1. From dmesg :

If you use a custom kernel, you may also want to pin the version you are using to avoid it being replaced with the default version when upgrading.

In /etc/apt/preferences.d/linux-image-generic (I haven't tested it yet) :

The method described here should only be used if you know what you are doing. The kernel patch in Endless OS's kernel was rejected from the official kernel, I can't guarantee it's quality. I can't guarantee that it will be maintained in the long run and ported to new versions of the kernel.

If you install Ubuntu with a custom kernel, you will have to manage all the kernel updates yourself. I hope that this fix will only be temporary until Dell release a bios version with AHCI mode support, but it may not happen.

The kernel also include other patches that you may want to review. You may also have to build and install other packages from Endlessm repository, like linux-firmware, as some of theses patches are to add support for new hardware not currently supported by the official Linux kernel.

I have ordered the same laptop. It has yet to arrive. Unfortunate that this is the case.

Just thought I would let you know that dell has released a new driver for this laptop since your original post.

I don't know if it will fix the problem and add AHCI support. It is not listed as a feature but it might be worth a download to find out.

I think this looks promising: https://wiki.debian.org/DebianInstaller/SataRaid. I'm interested in this laptop so I'd like to know if it works.

Use the following method only if you want to have a dual boot system with Debian and the other operating system on the same Serial ATA RAID:

12
How do you install Ubuntu on an Intel RST RAID-0?
5
No hard drive detected during ubuntu 19.04 installation
4
I don't see ssd in Ubuntu install on Dell Latitude 7400 with RST
4
Request failed for pin 180 on live USB boot
1
How to run Ubuntu on new Dell XPS 15 7000 Series-7590
0
Should I set up Ubuntu as dual-boot and what partition size should I choose?
1
Black screen after grub selection
0
Ubuntu partition does not turn on, but Windows partition works fine
0
How to install ubuntu 20.04 on Intel RST and not AHCI
0
Would replace SSD disable Intel RST/fake RAID?
See more linked questions

0
RAID mode on XPS 9550
0
How to install ubuntu on on Asus ROG G701VIK
0
Dual Booting problem: Grub cannot detect Windows 10
0
Installing Ubuntu on a new Dell Inspiron 14-5000 laptop with RAID-0
4
How can I get around Intel RST thingy while trying to install Ubuntu?