Why does Drag&Drop from Engrampa (*.tar.gz content) to Thunar not work?

There's a tooltip when dragging (see the screenshot below) but at dropping it flies back to Engrampa and nothing is done: no unzip, no untar, no mkdir(s), no copy, no sudo password dialog, no info/error message whatsoever.

Most likely your are missing the "thunar-archive-plugin". Try to (re-)install it. If this doesn't solve it, try following the instructions here.

However, if such simple functions fail silently, I'm not going to change to a Linux desktop once Win 7 support expires. :(

After performing (as suggested in Eroldin's answer):

there's a message now, at least: 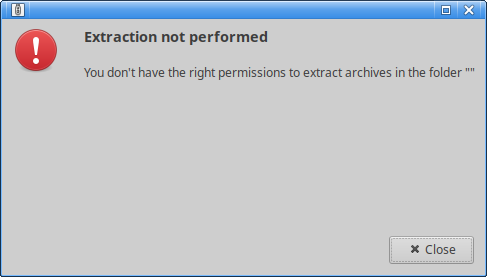 A sudo password dialog, as known from other apps, would be nicer, however. (And the target folder's name isn't "", too.)

Not the answer you're looking for? Browse other questions tagged xubuntu xfce thunar drag-and-drop gzip or ask your own question.