I recently installed an SSD into my machine. The machine itself is a Lenovo thinkpad W520, and it previously had an internal HDD. I moved the internal HDD into an expansion bay (replacing the CD-ROM), and put the new SSD into the internal bay.

The problem I'm having is that I have my Ubuntu configuration EXACTLY the way I want it - I originally spent many hours configuring it to get it to the way it is now. I'd rather not do this again. But, I'd also like the boot-up gains I would get from the OS being on the SSD.

So, what I'd like to do is clone my Ubuntu partition onto the SSD. The catch is that the standard HDD is significantly bigger than the SSD. And it has a windows partition that I don't need on the SSD (I never use Windows, so if it boots off of the other hard drive, that's fine). The layout of my hard drives are as follows:

1) Resizing the partitions /dev/sdb5 and /dev/sda1 to be the same size. 2) Booting into Ubuntu 11.04 (from /dev/sdb5) and running dd if=/dev/sdb5 of=/dev/sda1 (of course this causes problems with booting, so I had to reinstall grub.. I can get it to boot, but then I have problems with initrd not finding some files ... presumably it can't load some partitions I think).

Now, I think those two steps are the wrong approach, because it will clone /dev/sdb5 EXACTLY - including references in fstab which point to the wrong hard drive. I'm not sure exactly how to rectify this. I could install Ubuntu 11.04 onto the SSD, then try and copy over all of my configurations, but I'm concerned that I'm going to lose something, or that I'm going to overwrite something like fstab that points back to the original hard drive.

Note that currently, I can still boot from the HDD, so it's not imperative that I get this figured out right away, but I do want it to be exactly how it is right now, so that I can maintain my current level of productivity (it's a work laptop).

Suggestions on how I might be able to overcome this difficulty?

There is more than one way to accomplish getting your old system onto a new drive, but you didn't really ask it that way, you asked for how to clone the system.

I would just use gparted, myself, from the live CD so neither partition is mounted. You can shrink the original partition to the size you want it to be on the SSD, then copy and paste the partition to the new drive. If I remember correctly, this will reuse the same UUID, but you can change that on one or the other partition afterwards. The command for this is sudo tune2fs -U random /dev/sdb5 assigns UUID for sdb5.

If you don't want to change the old system, and if you want to keep it mounted for a while, you could change the UUID for the SSD partition, and edit your fstab. It's actually not hard at all, and is something you should learn about. It's pretty self-explanatory for someone with the knowledge you already seem to have. Once you assign a new UUID, you can see all of them with this command: sudo blkid -c /dev/null - the parameter -c specifies the cache file, and /dev/null means don't use a cache, so you always get any changes right away. I always use that form, and can see no downside unless you have a lot of partitions.

Once you get the UUID, you can copy and paste it over the old one in /etc/fstab using gedit or whatever text editor you prefer.

Personally, though, rather than taking time to resize the partition first, I'd simply copy the old install to the new disk. If you don't know how to install GRUB to the mbr, you might want to first install a base Ubuntu, then back up /etc/fstab, copy the old install over it, and then copy the fstab from the new install so it has only the correct entries.

Boot from the livecd, mount both drives, then just copy the files over with sudo cp -ax /media/source /media/dest. Edit the /etc/fstab on the destination to point to the correct UUID ( look up with blkid ), and reinstall grub.

I would suggest avoiding to use dd if=/dev/sdb5 of=/dev/sda1 if your system is running from /dev/sdb5 itself (and presumably not mounted read-only).

One the copy is made (and perhaps after reboot is the partition table needs to be refreshed), still from the live CD, mount your new root partition using a Terminal:

Then, edit /mnt/etc/fstab to point to the correct locations.

The bash script clone-ubuntu.sh automates the steps the accepted answer outlines. A menu is provided to make the new partition easy to find: 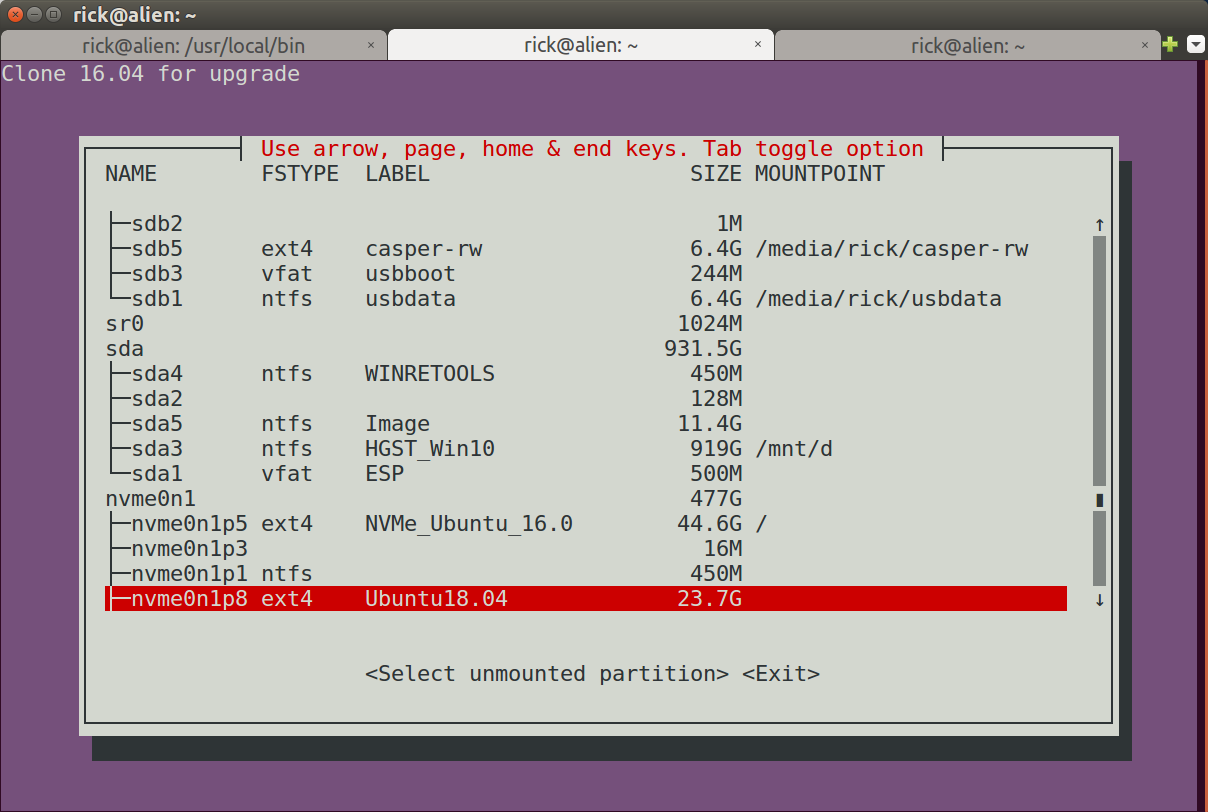 Visit the link above for a copy of the script and important points to consider such as:

Not the answer you're looking for? Browse other questions tagged 11.04 boot partitioning configuration ssd or ask your own question.

19
Cloning hard disk partition to smaller SSD on laptop
0
Cloning from HDD to SSD
1
Moving Ubuntu 18.04.1 OS from HDD to new SSD for faster boot
17
Backup/clone live to a new partition which can be booted
12
How can I make a backup of an EFI System partition?
1
How to copy and restore to smaller partition
0
How do I replace LVM root volume with SSD disk on Ubuntu 13.10

1
Correct steps to mount an internal backup harddrive
0
What is the recommended disk partition for kubuntu 14.04 manual install and dual boot with Windows 8.1 64 bit?
0
How to move Wubi partition to a whole drive?
2
Dual boot Ubuntu and Windows 10 with GPT
3
Grub rescue after "Windows Anniversary Update"