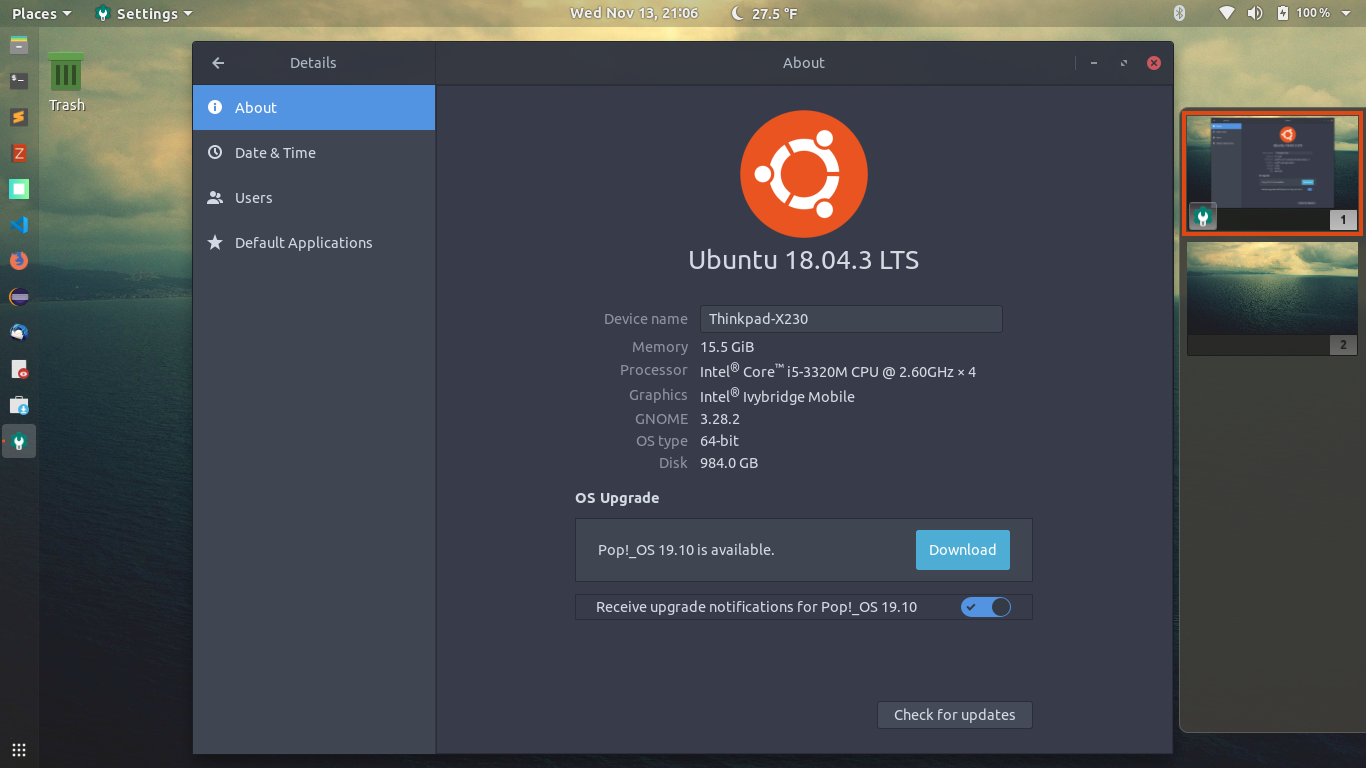 I have Ubuntu 18.04 and I just received a notification that I can upgrade to Pop!_OS 19.10. Why in the world would this happen? Did I break my system? Has anyone else had something similar happen?

The only thing I have installed from Pop!_OS is their icon theme. Could it be because I have their ppa on my system? How can I clear this notification and request to update?

By adding the Pop PPA, you've received the patched version of GNOME Control Center, which pulls in pop-upgrade, which will prompt to upgrade to Pop!_OS 19.10. It's a required dependency of the patched version of gnome-control-center, so removing it would also remove the control center. We don't recommend adding the Pop! ppa on top of Ubuntu. We apologize for the issues it caused!

So I figured out what the issue is after some detective work and some experimentation. I had the Pop! ppa on my system for some reason. I guess this was a side effect of using the Pop Icon theme. I was searching through folders in /var/lib/ and found an empty pop-upgrade folder. At first I was not certain what it was, but it was entirely too coincidental for me to have a Pop!_OS system upgrade message and run across this folder and not have them be connected.

I have TimeShift on a daily schedule (highly recommend this people) so I decided to just sudo apt-get remove pop-upgrade and see what happened. I did this and then used autoremove but I ran into issues. I no longer had an ability to get to my default Gnome Settings menu. There were probably a bunch of other issues.

So what I did was I used TimeShift to go back to the day before, and when I went to apt-get upgrade I realized that gnome-control-center was being held back from upgrading because it needed additional packages. Those packages were libpop-upgrade and something else. So now I had it cornered. I must have used dist-upgrade earlier that night without realizing it, and it just force installed those extra Pop! packages, which led to the message. After I removed the Pop! ppa from my sources list, gnome-control-center no longer wanted to update, and pop-upgrade was not requesting an install.

Basically, do not have Pop! ppa on your Ubuntu system, because it will cause problems. I should have seen this coming but I am still only an intermediate with Linux. If you have already run into this same problem I had above, roll back to a previous point in time before the gnome-control-center upgrade, and remove the Pop! ppa from your system. Then you should be able to use update and upgrade without contaminating your system.

Not the answer you're looking for? Browse other questions tagged 18.04 upgrade updates notification or ask your own question.

0
How can I repair a Ubuntu installation that is missing numerous packages?
1
Distribution upgrade (12.04 -> 14.04 LTS) halted while unpacking/installing packages
0
not able to open System setting after upgrade to Ubuntu 14.04
1
Upgrade from Kubuntu 14.10 to 15.04 hangs with grayed out Distribution Upgrade window
0
Ubuntu 18.04 asking for a distribution upgrade
3
Thunderbird calendar alerts are no longer persistent system-wide stay-on-screen notifications
0
Failed attempt to upgrade from 18.04 to 20.04 directly, now sources.list points to Eoan
1
20.04 upgrade from 19.10 stopped. Unidentified error occured