Installation MScore fonts: first not found and not extracted, perhaps not fixed

I wish to have the Windows/MSDOS fonts installed in my Ubuntu 18.04, installing the package ttf-mscorefonts-installer (3.6ubuntu2).

After launching the installation of ttf-mscorefonts-installer, I am asked for acceptance of the EULA license 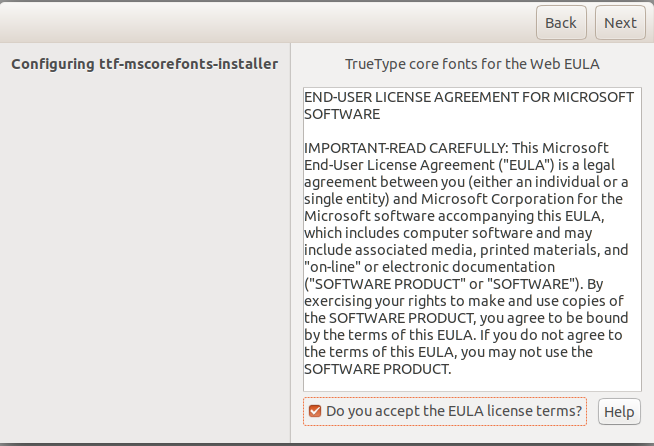 The following message makes me think that all is fine:

Instead, shortly afterwards, I am presented with this one which betrays my expectations:

If I click on 'Run this action now' there is another windows asking for authentication for /usr/lib/update-notifier/package-data-downloader. If I proceed, the screen is greyed out but the application does not seem to proceed within any reasonable time. I can cancel the operation, but I am unable to fix the problem

Repeating the same from the terminal, the interesting part of the input is

mv: cannot stat 'andalemo.ttf': No such file or directory

The concluding remark is

One or more fonts could not be extracted. The fonts are NOT installed. Please run 'dpkg-reconfigure ttf-mscorefonts-installer' to perform the installation again

Launching the above command, first I get this window about font files location:

I leave the line blank since the fonts have presumably not been downloaded (not extracted, not found).

Second, this other window on mirror repository

where I again leave the line blank trusting that the system is informed about where to fetch the material.

The command is completed with exit status 0, but there is no messaging about what happened.

At this point I don't have a benchmark to know whether the installation has been complete and successful. In /usr/share/fonts/ I cannot find the ttf files mentioned above in 2.2.1: find -name verdana.ttf produces no match in both /usr/share/fonts and $HOME

Knowing this is important for triaging other issues down the line; more later in a different post.

I have seen in another computer with Ubuntu 14.04 and ttf-mscorefonts-installer 3.4+nmu1ubuntu1 that the fonts in points have actually been stored in /usr/share/fonts/truetype/msttcorefonts/. So I imagine that now there must be something wrong with sourcing and saving these files.

It appears that ttf-mscorefonts-installer is not properly installed.

Run the following commands to reinstall the package:

Now, when you get to a screen that asks you to select <OK>, press TAB to highlight <OK> and then press the SPACEBAR to select the highlighted item and/or then press ENTER to continue.

Follow the same process for any screen that asks you to select <OK>.

Then, check the /usr/share/fonts/truetype/msttcorefonts/ directory to verify the install.

If that doesn't work, purge the package and reinstall it:

Follow the same process described above to select <OK> when prompted.

On my system, it is installed correctly. The files are downloaded to /usr/share/fonts/truetype/msttcorefonts/ and when I run: sudo dpkg-reconfigure ttf-mscorefonts-installer nothing happens.

Also, when I run sudo apt install --reinstall ttf-mscorefonts-installer, I get no errors and the message eventually says:

Not the answer you're looking for? Browse other questions tagged apt 18.04 package-management fonts synaptic or ask your own question.