Is there an iTerm2 (terminal application for Mac OS) equivalent for Ubuntu?

Amongst the many features it adds the one I'm after is the "hotkey window", where you can overlay/hide a translucent terminal window at the touch of a button on the keyboard.

As suggested in the iterm2 website itself (under "Hotkey Window"). There is guake, tilda and yakuake. Which can be installed from repositories.

I personally use guake. If you use unity, I have written an indicator for guake although you can easily enable systray in unity as well.

While I in general prefer GTK applications in terminal emulators the reigning champ Qt is being overtaken not by them but by projects eschewing traditional GUI toolkits entirely!

My current picks for my favorite Linux iTerm2 replacements are, in no particular order:

Has GPU acceleration, built in multiplexer (tabs and splits), ligature support, built in imgcat support, background images, transparency, shell integration, almost everything one could want. One feature I miss is profiles, but you can always have multiple config files (author made the interesting choice of using Lua rather than ini/toml/yaml/json for the config file). The only other thing I want is a hotkey dropdown terminal, not the end of the world. If you're a ricer, this is the terminal emulator for you. It's a newer project but this may be the iTerm2 killer. Go give the project some love.

Fantastic and polished terminal emulator, been my daily driver for a while now. Not on par with iTerm2 in terms of feature set, but a very solid choice for a daily driver. It just works. I'm not wild about the choice of configuring through dconf rather than just having a text file in $HOME/.config, but not the end of the world.

The stock KDE terminal is a solid choice and in addition to a rich feature set it's the only terminal I know of that comes out of box with that recent MacOS-ish translucency blur onion skin effect (a.k.a. gaussian blur).

Not quite as polished as some of the others, but has a very full feature set, see my old review below for more details.

Some other worthy contenders not mentioned in the original answer are Tilix and Terminator (check them out!), and my top pick is still for the most part
Qterminal. Linux terminals in general seem to be getting closer to parity with iTerm2.

I haven't even come close to listing them all, although these are the ones I use/care about the most.

I cannot find a single linux terminal that completely matches this feature set (much less all the ones I didn't mention) but there are linux terminals that come pretty darn close, and can do things that iterm2 can't do (like set per window/pane background images). So here are a few terminals that are probably closest to iterm2 in terms of feature parity:

This is an abbreviation of qt terminal. It has full true color support, a dropdown hotkey, transparency, background image, panes, tabs, shell integration. Install via apt. Cons: no built-in way to preview images, it's handling of background images can be wonky.

The default KDE terminal (e.g. for kubuntu) has true color, tabs, background image, transparency. Cons: no hot-keyed drop down window, no independent panes, handling of background images can be wonky.

A terminal that AFAICT was just written by one guy with a surprisingly rich feature set: has true color, horizontal splits, transparency, shows images, shell integration. Cons: no background images (there's an issue open), no vertical splits without configuration, no drop down, and while it has packages for several distros ubuntu isn't one of them (have to manually install deps and compile from source).

The default terminal of the Enlightenment desktop. It by far has the best image handling of any terminal emulator I've ever used and has been my daily driver for a couple of years now. Has resizable independent panes (vertical and horizontal), tabs, transparency, shell integration, but it lacks true color support (maintainer says he will not be adding it) which is becoming increasingly annoying as a heavy neovim/ncurses user. Cons: 256 color only, no drop down, package in repositories is extremely out of date and installing/compiling the latest version of the EFL dependencies literally takes half an hour.

There are a lot of other worthy terminal emulators: rxvt-unicode, suckless, termite, etc. but they all have glaring flaws, sometimes even worse than the above. Suckless (st) for example keeps it's configuration in a header file meaning every config change requires a recompile. Many of them (including some of the ones I highlighted above like konsole) seem to be configurable only via mouse, which is beyond annoying for a terminal emulator.

Many might consider the existence of tmux to make splits/panes a non-issue for the terminal itself. I don't disagree, but YMMV.

There's a glaring omission: I haven't mentioned any of the electron-based projects like hyper. That's because I personally keep about 12 different terminal sessions going at a given time, and electron is just too greedy for that kind of usage. Which is a shame, as some of those offerings have impressive feature sets. If you tend to have fewer sessions open you might give one of them a try, I've played with extraterm and it seems a little more in line with what iterm2 offers.

I wish everyone luck, but my quest for the one true terminal emulator continues onward.

You can try terminator, search for it in the Software Centre.

I'm not sure whether it provides the feature you require, but it offers some other good features of iterm2 like horizontal and vertical window split

Since April 2020 the source is hosted by github.

tilix is the most complete alternative I found so far

Just to add Hyper to the list. It's an electron based terminal that's fairly neat, stable, and easy to use with lots of configuration options.

iTerm2 does amazing things, but so far only for Mac OS X. (github)

extraterm is a terminal emulator for Linux, Mac and Windows that does different amazing things.

kitty is a cross-platform terminal emulator with GPU rendering, Python scriptable, and feature-full.

Deepin Terminal is a pretty good option. It's a very fast/light terminal. You can install it by running:

You can use tmux - simple and powerful terminal multiplexer.

To install press Ctrl+Alt+T and do:

The Trans-terminal-to-hotkey functionality to which you refer is available with the stock gnome terminal (or just terminal) which comes preinstalled in most Ubuntu versions.

Just right click the icon & choose preferences to set up. You won't see many options until you click 'profile' this gives you a 'load file' if you will.

As soon as you've set a profile, you get to customize everything about it, including transparency and keybindings.

Alot of the other answers refer to Tmux, which can be autoset on start with the terminal. In the 'Commands' section of preferences, uncheck the box above the textbox input line. Type tmux into this textbox. That is it. Tmux will autoload in all future windows.

And dont forget about Profiles. I personally have 3: tmux, vim, and nano. All configured via same process.

EDIT Sorry to bring this one back up from the depths, but I have a related info that I believe could save a lot of time for a lot of people. It changed my workflow, so when I saw this back on the front page, I decided to share.

Since writing this answer, Ive started using Terminator, as it lets you open as many terminals as you need (within reason) and save all of their attributes. So If you want to maximize the terminal, then split it into 6 or 7 terminals, and finally change each to a seperate profile (each with it's own transparency, color, command on launch, etc.), you can save all of that to a single layout.

I believe it is just

To show you just how powerful this program can be, I will show the current content of my displays. I currently have 3 seperate displays. Currently, this is what is loaded to them: 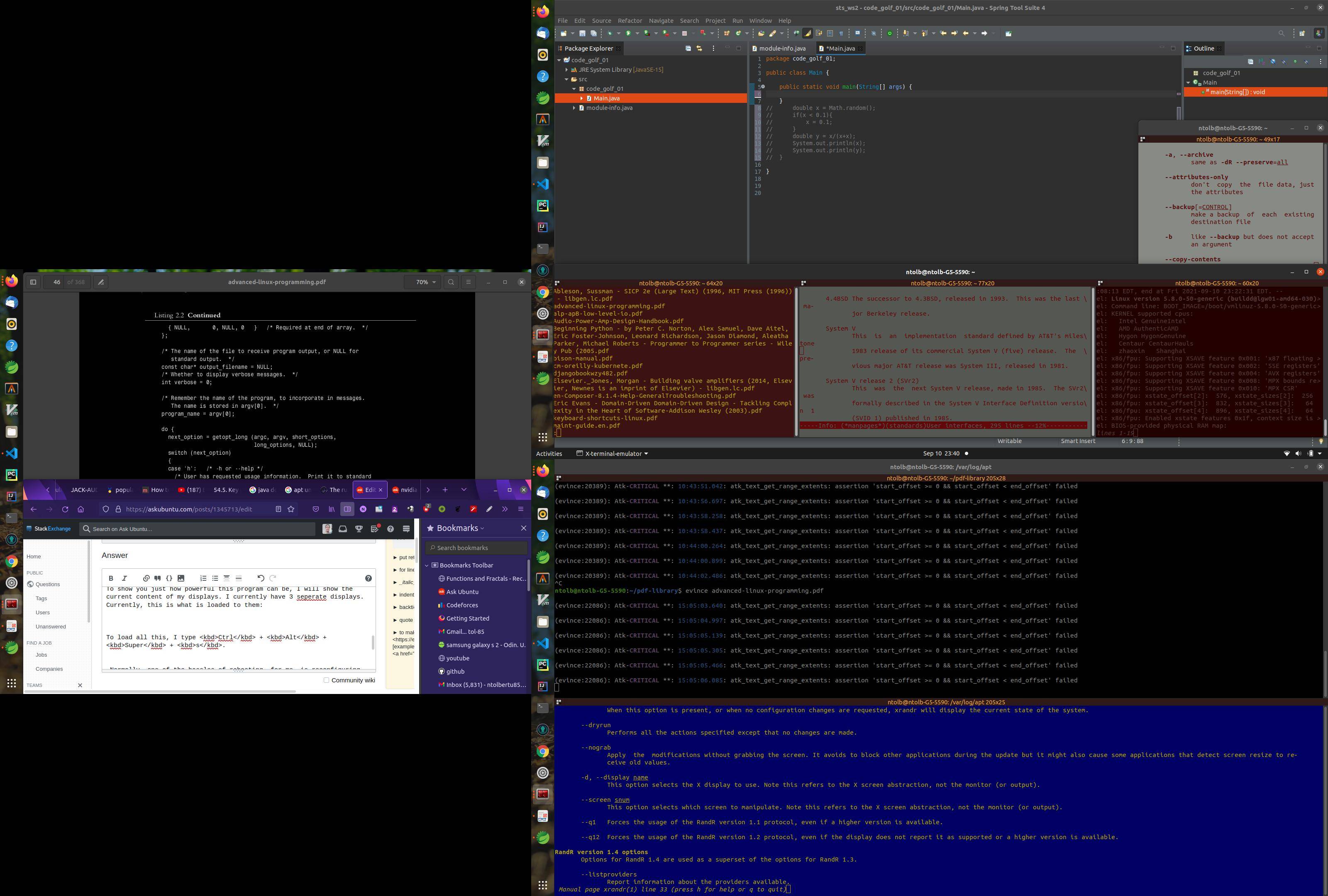 Normally, one of the hassles of rebooting, for me, is reconfiguring all the windows that I need. However, they usually need to be in one of 5(ish) layouts. So I just set them each up and to a keybinding with terminator. I still have to open anything else I need, but one of the presets usually gets me most of the way.

NOTE: the non-terminal apps do not normally start with a layout launch. You have to set them to a terminal's launch command. But with 6 separate terminals launching, that is 6 opportunities to run commands. To launch an outside app, you have to use the ; or && operator. The 'command' is actually anything you can fit on a line, but you have to launch a shell somewhere in there.

17
What's a terminal similar to iTerm2?
80
How do I access and enable more icons to be in the system tray?
1
How to open a file in Sublime Text 2 directly from a link in terminal?

6
How can I programatically show/hide my app window with global shortcut key?
0
Compiz crashing takes Ubuntu with it
0
Auto copy on double click in Terminator
4
How can I gracefully close all instances of gnome-terminal
2
Is there a keyboard shortcut for safely closing a responsive application Ubuntu 14.04?
2
Is it possible to assign a keyboard shortcut to minimize a window?
2
terminal appears on hotkey but command not executed
3
Terminal emulator with keyboard scroll-copy-paste
0
Delete Hotkey that was created during the Ubuntu 21.10 update