What happened to the 10-second boot milestone for Ubuntu?

According to the Ubuntu Wiki, Ubuntu had met the goal switching to the replacement init called Upstart in 9.10 (Karmic) and following that, Ubuntu had a target for achieving the the 10-second boot milestone in 10.04 (Lucid).

With our goal of switching to upstart in 9.10 met, we can now focus on achieving the 10sec boot milestone we set for Lucid. We will switch to a Dell Mini 10v with SSD as our reference platform and regularly report results on a daily basis. Time and bootchart results for both SSD and HDD storage will be posted [...]

A target like 10s means we need a budget for each major component of the boot sequence:

These details are most likely based on this message by Scott from Ubuntu developer list, which was found via this dated article on Ars Technica. The other link to the UDS presentation is no longer valid, but a copy can be found on the Ubuntu Wiki (see the following quoted source).

Notes: This is going to be hard ;)
On the last night of the Berlin sprint, I put together a
proof-of-concept to see whether this was possible. 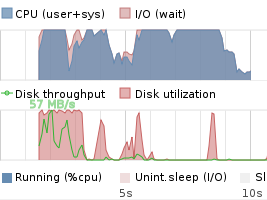 Notes under slide: It is.

The UDS presentation had hinted that 10-second boot was possible, except that was only a proof-of-concept. Looking back at the milestone ten years later today, there does not seem to be any documented outcome of whether Ubuntu had successfully boot in ten seconds or otherwise. Then again, was the milestone merely an experiment or intended as a real feature--not sure either.

So what happened to the 10-second boot milestone--any documented outcome; else, what do we know about Ubuntu boot performance back then?

That goal was achieved.

It is possible (and has been for a while): my system boots in 12.3 seconds. That includes MySQL so I can forgive them the extra 2.3s. Get a quick SSD as a boot up disk and remove any services you do not really need and you too can get a 10 second-ish boot.

Biggest hurdle during boot tends to be the wireless for notebooks. You can speed that up a little bit with some tweaking.

Mind though that the one thing that happened in between was that Canonical dropped their own start up (upstart) system and Unity so we got the regular "systemd". At that moment they also no longer have any influence on the boot time anymore (besides disabling default services). Besides that hardware also caught up with them: the introduction of SSDs makes tweaking your operating system to start up quicker useless... you never get any noticeable improvement that you get when you use an SSD.

TL;DR The 10-second boot milestone was marginally achieved based on the official result; however, the same result may not be achieved in practice.

We are not certain, but the milestone was reviewed in late-2011.

BootSpeedAnalysis on Ubuntu Wiki may be the only documented outcome of the milestone, or at least closely related, found to this answered date. The 10-second boot may have been achieved, but the result was not exactly ten seconds.

All tests and charts were done on a Dell Mini 10v, with an 1.6 GHz dual core Atom CPU (i. e. rather slow), and a 16 GB SSD with a maximum read throughput of ~ 96 MB/s (according to palimpsest, confirmed by ureadahead bootcharts).

The "reference platform" describes what makes the boot times comparable from one release to another, by using the same hardware as defined in BootPerformance on Ubuntu Wiki. The following table shows the "boot times" of several Ubuntu releases: 10.04 (Lucid), 10.10 (Maverick), 11.10 (Oneiric Beta-1, Oneiric). Notice that 11.04 release is missing and not listed here.

Based on the information above, we know that:

There are few relevant video clips that demonstrated Ubuntu 10.04 booting process on different hardware. The results are summarized as follows.

The unofficial results are intended for relative comparison and should not be considered as "true results" due to the hardware and system configuration may be significantly different from the reference platform.

What do we know

With respect to the reference platform--1.6 GHz dual-core Atom CPU and 16 GB SSD--that now we may conclude that the 10-second boot was marginally achieved by Ubuntu at the time. Whether Ubuntu has since continued to achieve that or otherwise, that may remain undocumented at best.