How can I install on a non-PAE CPU? (error "Kernel requires features not present on the CPU: PAE")

After burning Ubuntu 12.04 to a CD, I tried booting and got the message:

What does this mean?

kernel system-installation pae
Share
Improve this question
edited May 9, 2014 at 6:19

The error message means that your CPU does not support PAE extensions - that is a technique which allows a 32bit CPU to address more than 4GB of memory address space.

By default, 12.04 and later versions of Ubuntu expects a CPU with this capability:

PAE is provided by Intel Pentium Pro and above CPUs, including all later Pentium-series processors (except the 400 MHz-bus versions of the Pentium M). It is also available on other processors with similar or more advanced versions of the same architecture, such as the AMD Athlon[dubious – discuss] and later AMD processor models. wikipedia

While the above is strictly true, old systems which have the memory controller on the motherboard may not "expose" the CPU's PAE support, effectively making them non-PAE.

There is a heated bug report about this; Canonical has decided that the default Ubuntu Desktop install will expect PAE support.

Workaround 2: Install an older version and then upgrade to 12.04

Workaround 3: If you have a wired internet connection, use the "net install" mini-CD

There is a custom iso available (use at your own risk).

It worked for me, and I just had to install the relevant updates when I was done.

Many thanks for all the suggestions and assistance.

I couldn't work out how best to give a report back of how I got on, so I'm writing it as an "answer".

It took all of yesterday evening and through the night chugging away, but I now have 12.04 LTS running and working perfectly on my eight-year-old little Samsung laptop (of which I'm very fond, despite its rather feeble processing power). I am due to treat it to a brand new hard drive as Ubuntu warns me that its current one is about to cark it.

Here are the steps it took to get 12.04 LTS working on this non-PAE machine:

Bah. I did not want to eat into the Windows XP partition, and didn't see why I needed more than 6GB of disk space just to have Ubuntu for general web browsing and checking emails, so I started again:

I tried looking at how the disk was partitioned, and there were about four partitions in addition to the XP. I rather blindly and haphazardly deleted all of them except for the XP one and a ca. 300 MB swap partition, and created a new one for the Ubuntu partition with the number "4" and a single "\" or "/" involved in it somewhere. I was sort of past caring (and losing the will to live) by that point and was crossing my fingers that my XP partition wouldn't be trashed.

At that point I also read that before upgrading to 12.04, you should update all software on the existing [11.10] release. (So my ploy of deleting loads of programs would have come to naught). I also discovered the link to the alternative CD iso file, so burned that to a CD rather than using the internet (even though the internet connection is faster than reading from a CD at 70MB/s thanks to a recent free BT [British Telecom] upgrade). My reckoning was that I could preserve disk space by using the CD because the more recent updates wouldn't be downloaded during the installation.

So, onward, I tried this:

And hurrah! It now works (as does booting to Windows XP, phew), without a single glitch or incompatibility. I'm very impressed that all the Fn key combinations work, the wireless works, the screen looks great, and the speakers can be made to have their volume much louder than in Windows (meaning I don't have to use headphones most of the time to hear anything). I can even scroll up and down using the right-hand edge of the touchpad without having had to enable the feature! Plus, the hard drive doesn't grind away incessantly as has become the case with Windows. I love the Ubuntu font and, again, the outstanding readability of screen text on Ubuntu (noticeably better than Win or Mac in my opinion). Having the launcher at the left of the screen I wasn't too keen on at first glance, but having read the reasoning behind that design choice, it's something I'll try to get used to. It sensibly uses the abundant horizontal space to free up some of the much more scarce vertical space.

I'll end the gushing and waffling here with thanks again to everyone for their advice. I hope this description of my trials, errors and eventual success is of use to someone!

This answer completes existing answers on a bare metal installation with settings needed for an installation in Virtual Box.

Expose PAE to a virtual machine in Virtual Box

The kernel shipped with Ubuntu >= 12.04 is a PAE kernel by default.

From installations in Virtual Box the PAE capability of the CPU (if supported) can be exposed to the virtual machine. Choose "Enable PAE/NX" from the Virtual Box Manager System -> Processor settings: 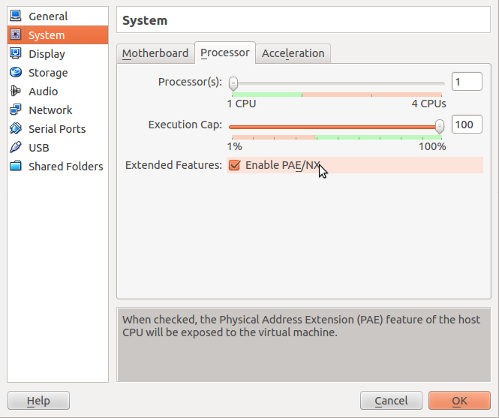 In case this option is greyed out your host CPU does not have this feature. Only then you will have to install a non-pae kernel.

Ubuntu 12.04 uses the PAE Linux kernel by default for 32bit ISOs so old computers that don't support PAE can't boot the latest Ubuntu version. But there is a way to install Ubuntu 12.04 LTS Precise Pangolin on computers without PAE support, using the non-PAE netboot Minimal ISO.

If you need support for non-pae ready systems, try lubuntu. If after installing you decide that you do not like the LXDE environment, you can install unity with this command:

To completely remove, and reinstall ubuntu, choose "Something else", and select the partition with ubuntu currently installed on it to be used as "/", ext4, and check the format box. 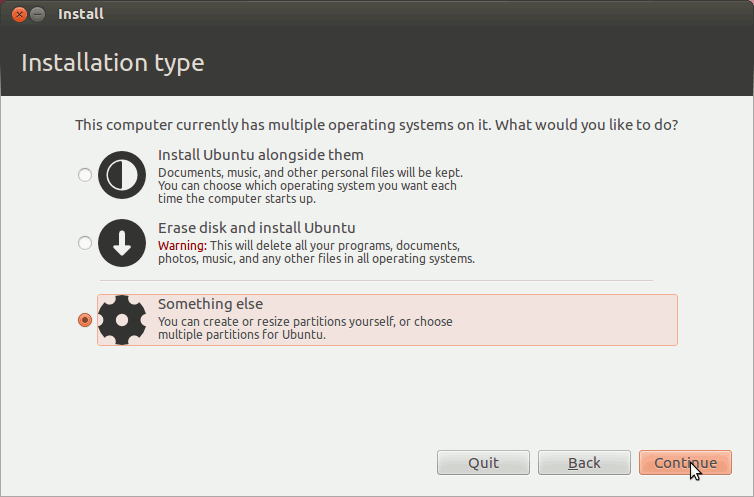 Not the answer you're looking for? Browse other questions tagged kernel system-installation pae or ask your own question.

5
Is there any version of Ubuntu that does not require PAE?
2
This kernel requires CMOV not present on cpu error message
1
Lubuntu 12.10 This kernel does not support a non-PAE CPU
0
Adding forcepae to bootable usb stick from ubuntu-14.04.1-desktop-i386.iso
0
Dell Inspiron 8600 pae?