Why does Kubuntu show an update that apparently doesn't exist? / Why is my update notification incorrect?

In the Notification area of the desktop we get a notification about an available update but opening Discover or even using apt or apt-get from the command line shows that the system is up to date.

Upon opening KDE's Discover we see "No updates". 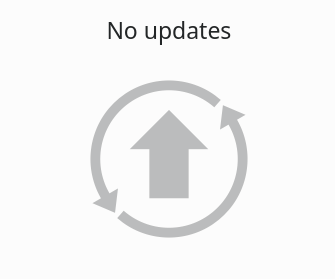 P.S. I just helped someone with this issue so I thought I'd post this to help anyone having the same issue as there seems to be no question here about it.

This is a known bug with Plasma that is reported to be fixed in a newer version of Plasma 5.16.0 which is not available by default on versions of Kubuntu lower than 19.10.

The bug is related to flatpaks. If you have flatpaks enabled in KDE's Discover, at least some packages are not update-able via Discover.

This will update the outdated flatpak that Discover was unable to update and should make your persistent notification about a "phantom" update go away.

In this case, the flatpak affected was an Nvidia driver but the bug reports mention others as well.

Use the info below only if you are familar with Linux, it is not a noob friendly section and only included to add some info from the comments

As mentioned in the comments below you can use Kubuntu Backports PPA to get a recent version of Plasma that will remove this issue, but it is very much a use at your own risk solution I could pull in less stable versions of Plasma packages that are still being tested. Only use this if you are familiar with how to purge PPAS and are willing to take the risk. (also this ppa should be purged before upgrading to the newer versions of Kubuntu to avoid problems)

I used this backport with no issues but your experience may very. I am not offering this as a solution only as information for the braver users. This warning is a copy and paste from the ppa description:

Not the answer you're looking for? Browse other questions tagged apt updates kubuntu kde flatpak or ask your own question.

1
How to get Update-Notifications when using Gnome Fallback on Ubuntu Precise Pangolin?
11
Update-manager does not show all updates
7
Why does /usr/lib/update-notifier/apt-check not agree with apt-get upgrade
3
How to fix or re-install the broken packages resulting from updates installation?
0
Issue with Software Updater installing new kernel
0
Ubuntu GNOME 16.04 OS updates through the Software application not completed
2
How can I update KDE Plasma to 5.13 on Kubuntu 18.04?
3
Why do firmware updates not apply?