How do I create timestamped backups for certain files I edit?

I often edit a variety of plain text files such as .css, .mkd, .sh, and .txt as well as .odt and .ods files.

All my files have 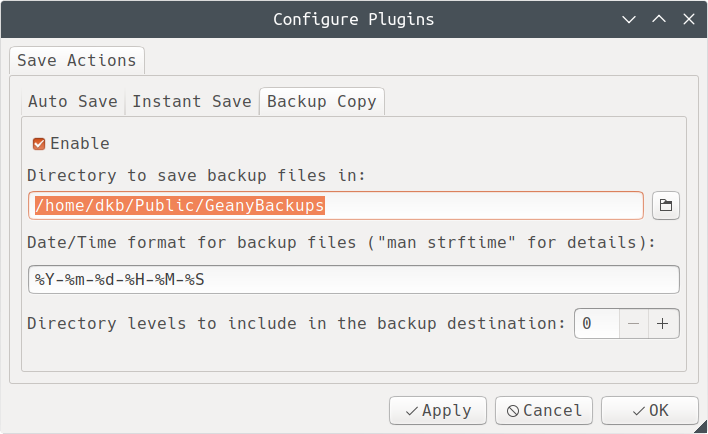 Gedit offered something similar years ago. Regaining this function may still be possible using the Manage External Tools… plugin. Answers here illustrate usage of this plugin.

As far as I know, other plain text editors such as featherpad, kate, leafpad and mousepad don't have such a feature. Even LibreOffice saves just one backup (if enabled in Tools > Options > LibreOffice > Load/Save).

It's possible to use rsync to backup files to timestamped folders but I want to capture backups of rather frequent edits in a destination of my choice.

I would like to have a script that allows me to perform a conventional save and immediately thereafter to generate a timestamped backup of a limited class of files I edit in my various text editors or in LibreOffice. I'd bind this script to a keyboard shortcut while leaving the conventional shortcuts still available.

Automatic time-stamped backups of a (any) specific file

If you are not afraid of compiling a vala file, the snippet below can be used. The advantage is that it is signal-based (using FileMonitor) and resource-consumption is zero. Furthermore, you don't need an extra manual action.

I came up with the following script, timestamp.sh, and assigned Ctrl+Super+T to run it.

50
Find the latest file by modified date
6
gedit: is there a keyboard shortcut in gedit itself to insert date and time?

7
How can I create a filesystem "view" of a folder that excludes certain files?
7
Use Ubuntu network share for Apple TimeMachine backups?
1
How to schedule backups more frequently
3
Time Machine like folder backups for Ubuntu
2
Bash script to edit excel files
1
How to change output device for backups
11
Excluding certain files and directories when deleting files
1
how to create bash menu for listed folders