I'm using Ubuntu and every couple minutes it goes unresponsive for a half second to a full second, which isn't normally a problem but makes trying to code extremely frustrating when your trying to hit backspace or navigate the code and nothing is happening. The problem is, the freezes are so brief that top doesn't have time to show me what is spiking the CPU (assuming something is, but I don't know what else could cause this).

Does anyone know how to troubleshoot this performance issue?

Edit: I've tried login in with Gnome Classic (No Effects) instead of Unity but it still freezes up every once in awhile.

Edit: The CPU graph doesn't seem to be showing any actual spikes so it seems you were right and my original diagnosis of CPU spikes being the problem was incorrect, I now suspect IO wait. I don't recall this happening for the brief few weeks I had Windows 7 Starter running on it though, which leads me to believe it isn't (just?) the hardware.. is there anything I can tweak to improve this? I'm using an Acer Aspire One D257, with Ubuntu 11.10.

There are two additional tools that you may want to check out:

If you don't get what you want from those two tools, then you may need to use developer-tools like OProfile or Sysprof.

All the tools listed are available from ubuntu repositories

Regarding your observation with usb, from what I've heard, some usb-controllers behave a bit flaky with certain hardware which can cause Interrupt-storms, this could cause what you are describing. Try searching for usb interrupt storm and you will get quite a few hits.

I used htop for years and I finally found how to get Cpu Utilization by numbers and percentages, I am surprised I have missed this.

You can also get IORates 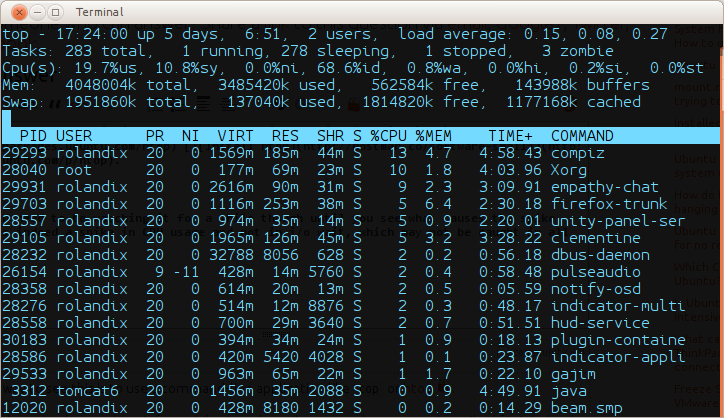 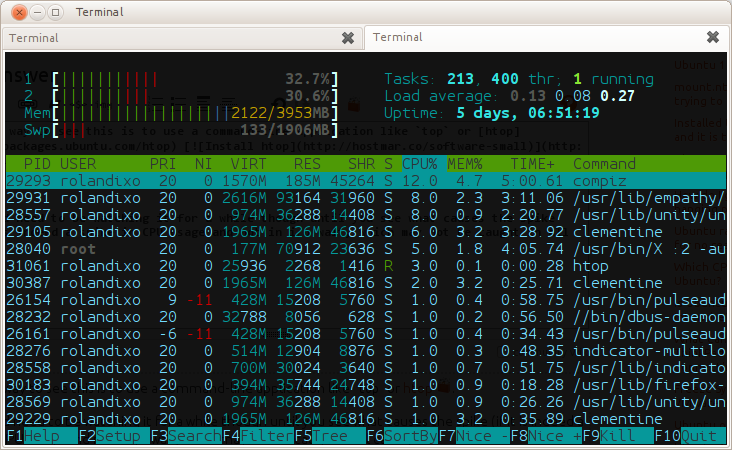 You would need to be watching it for a while though until you see what causes the spike (if it is indeed a spike in CPU usage and not in i/o wait, which may not be caught in all cases).

A new and very helpful tool is cpustat It has a graphical interface that allows you to monitor multiple pids over time.

1
which linux distribution on my netbook

4
Occasional excessive IOWait freezes computer - how to diagnose?
22
Long wait time on login
2
How do I prevent Ubuntu gradually slowing down to a stop?
2
I am experiencing slow performance on my system. How do I diagnose and fix it?
0
netbook slow on ubuntu (and win 7). Tips and tricks for speeding up
2
How do I use dmesg to diagnose slow boot speed?
4
How do I diagnose a sudden slowdown