How to rename all files in a folder

I have a folder that contains many files named with the same structure:

So name will be:

And finally I would like to remove all dots (.) except the one at the end (.mp4)

What commands should I use to create such script ?

This will do the job:

Firstly: Install rename by running the following command in the terminal:

Secondly: In the terminal,cd to the directory containing your files.

Finally: Rename the files to your desired format by running the following command in the terminal:

To see how the rename command will operate on your files but without really renaming them ( just print the output to the terminal ), you can add the option -n after it. Like so:

Explanation - as requested by Hamza:

Substitutes the ORIGINAL string with the NEW string.

To see how it works as simple as it gets:

Starts at the beginning of the string ^ and then matches one or more character/s ( any character ) (.+) before the dot \.

Makes sure the string ends with .mp4 by using the $ symbol which matches the end of the string.

This part is, however, a bit flexible and will give you undesired results if the file naming is inconsistent and you have files with more than five parts separated by dots in their names like file.number1.2010.720p.otherinfo.extrainfo.mp4

If this is the case, please substitute this part with the more strict regular expression below. This way it will only operate on files with five parts separated by dots in their names only:

Operates on all the files in the current directory.

You can use cut and bash string manipulation:

First approach: only with cut:

But this approach can be problematic since, the 6th field may be not the extension.

So you can have a second way:

With that command, you force the extension to be .mp4. It will work, but what if you have not only mp4 files with the same naming pattern?

In that case, you can use extension selection:

Note: to prevent bad behavior, I added echo in the commands to see what they will do before running them really.

Select all files and press F2; then do what's shown in the image below. 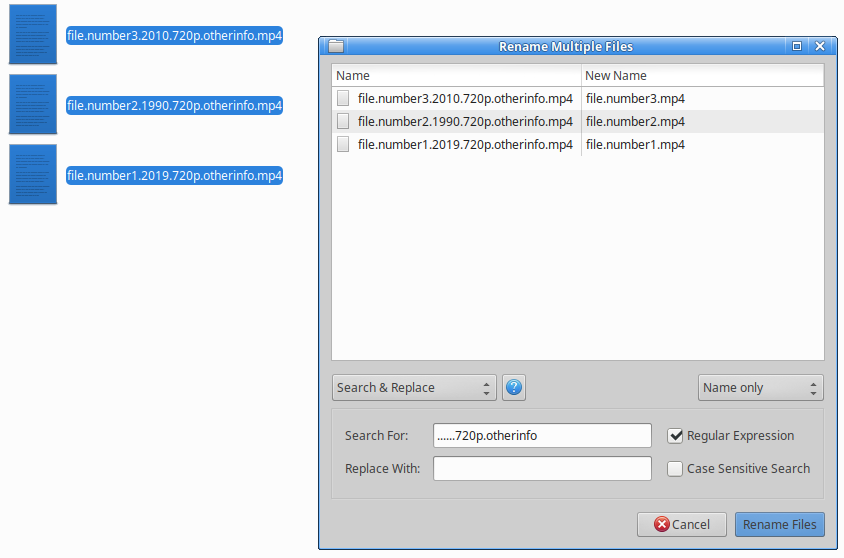 I always use Thunar (filemanager) for this just open it, select the files you want to alter (cut/paste/adjust/replace characters) and then rightclick->rename

you get a sophisticated menu with lots of options and ways to change your file names and their extensions, and see their previews in the right panel.

Not the answer you're looking for? Browse other questions tagged bash scripts or ask your own question.

3
Find files/folders in folder except some specific folders
1
Script to un-hide files with specific extention in folders reccursively
5
A script for moving files from subdirs to parent dir
4
Rename all file extension in directory
1
Rename directory using a variable
1
how to read all lines one by one from CSV and create multiple XML files accordingly(one file for one row) using shell scripts
0
Traverse through all folders and renaming all files inside folder sequentially 1.*, 2.*, 3.*