I am trying to boot Ubuntu on a Dell with a Ryzen 7. I can't get it to boot because of messages about kernel soft lockups and such. After a while the CPU heats up a lot (probably from a loop.) I can't get any other Linux distro to boot either. Does anyone know the cause? 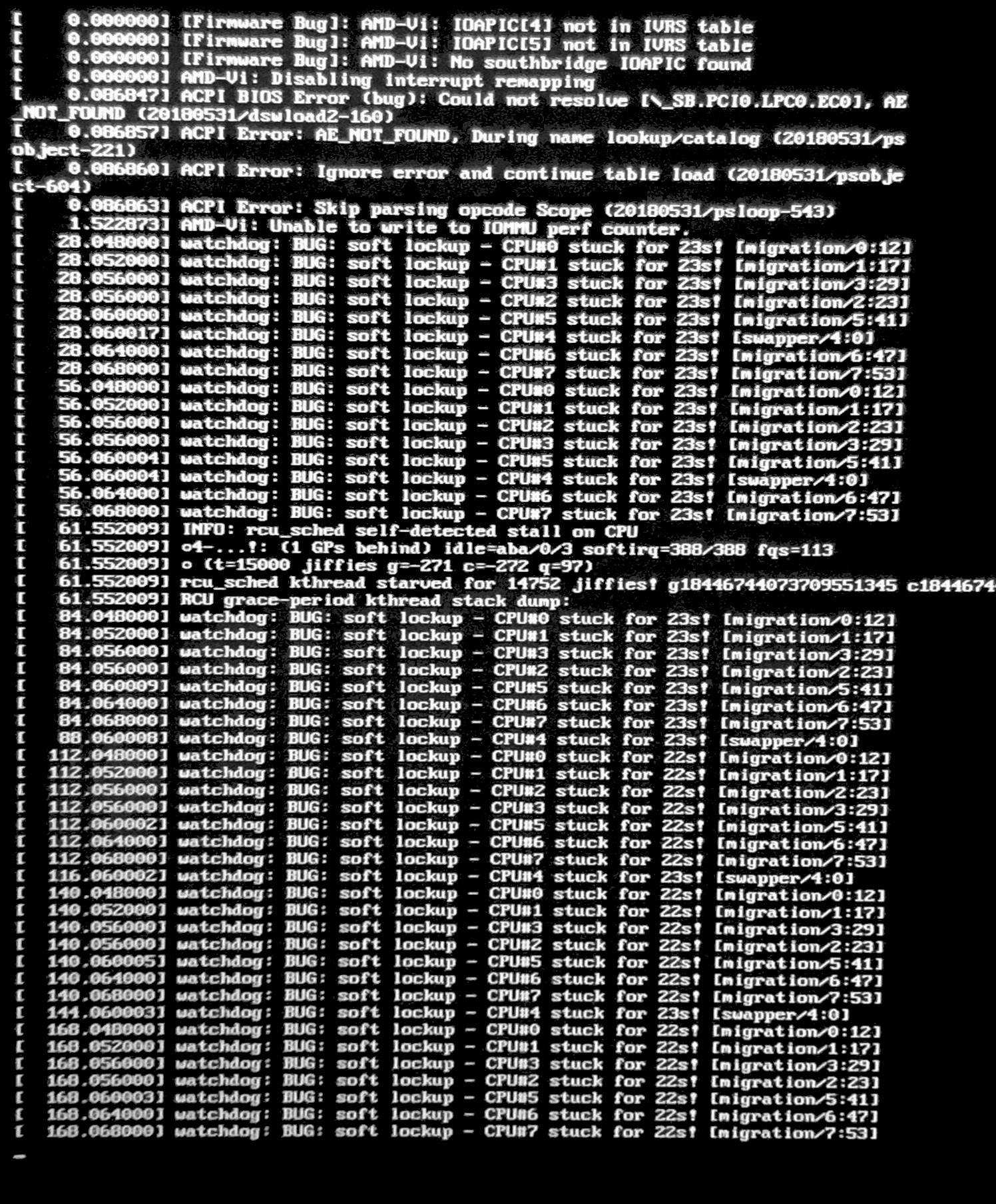 We ONLY support and answer about Ubuntu.

Ubuntu 18.04 has been proven to work with a Ryzen 7 so your statement does not hold up. 18.04 with a stock kernel and even with kernel 5.0+ installs perfectly.

The problem is with AMD. Ubuntu 19.04 with a stock kernel does not work and AMD admitted to never testing with 19.04; only with 18.04. The hardware seems flawed, or seems to pass wrong values to systemd and systemd crashes due to those flaws. So it is not even the kernel (ie. Linux) that is the issue but that beast called systemd. Ergo: systems NOT using systemd are likely to also install.

The site to visit regarding things like this is phoronix.

AMD has identified the root cause and implemented a BIOS fix for an issue impacting the ability to run certain Linux distributions and Destiny 2 on Ryzen 3000 processors. We have distributed an updated BIOS to our motherboard partners, and we expect consumers to have access to the new BIOS over the coming days.

So update your BIOS.

[Edit: Go read Rinzwinds post... It says all you need to know about this particular issue.]

They do just fine? I have two Ryzens. A Ryzen 7 1700 as a workstation, and a Ryzen 3 2200G as a SteamBox. Both run Debian/Buster and there are no problems. First Gen Ryzens did have a lockup problem, which could be fixed by enabling a certain BIOS/uEFI option. However, it didn't manifest in the logs: the machine would just freeze. Even that seems to have been fixed in newer kernels.

Now, you have to realize that using a Ryzen is "bleeding edge": it's why I used Debian/Buster, which was the "testing" branch when I installed these machines. When you go bleeding edge technology, you nearly always need to get distributions featuring the latest kernels.

However, I do not think that is the problem here. The latest Ubuntu comes with a Linux 5.0 kernel. My Debian/Buster machines "only" have a Kernel 4.19. So, I'm running an older kernel than what is current in Ubuntu. Now, you might have stumbled upon a kernel bug, but that is quite unlikely. Not impossible, unlikely.

Maybe there is a different problem with that CPU? It may be damaged? Not enough heatpaste and cooling? Have you checked the integrity of your RAM? Is the powersupply strong enough? So many potential problem sources.

Not the answer you're looking for? Browse other questions tagged boot cpu amd-processor lockup amd-ryzen or ask your own question.