How to enable virtualization, Ubuntu 18.04 in VirtualBox on Windows 10?

I'm trying to create and test a Docker swarm by creating a couple virtual machines on my (virtual) Ubuntu OS. (I know, I know. VMs on VMs on VMs. I should just get a Mac). I've downloaded VirtualBox in Ubuntu, and am running the following at command-line:

Virtualization is enabled on my Windows 10 machine: 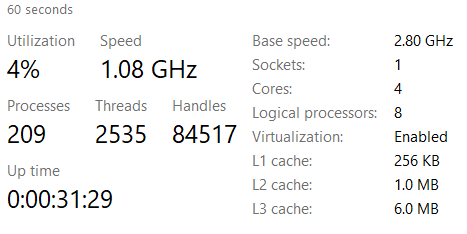 Virtualization also appears enabled for Ubuntu, as viewed through the VirtualBox Settings (running on Windows):

I've tried to enable through the Ubuntu BIOS on startup, but I can't seem to get in there to change anything. If I press F2 or F12 or ESC (or any key for that matter), I can see a list of processes running during startup, but don't have any control, and the OS just boots as normal. Ancillary question, is there a BIOS for Ubuntu running on a VM, or just one for my hardware?

I read that perhaps I should disable Fast Startup on my Windows machine, and have done that, but have seen no difference. And my host machine boots up pretty fast anyway, too.

If I run in Ubuntu Terminal,

nothing is returned. Same for svm, which would appear to confirm that virtualization is not enabled or possible. The ultimate question is, how do I enable it?

If you want virtualisation INSIDE the guest then you need to enable that in the virtualbox settings.

If you wanted something else then perhaps you can clarify your question?

My setup is similar yours and I encountered the same error. The following code fixed the issue for me.

Here's a link where I found it. https://docs.docker.com/machine/drivers/virtualbox/

I hope it helps.

Not the answer you're looking for? Browse other questions tagged virtualbox virtualization docker or ask your own question.