When it was 14.04 and 16.04, connecting the two computers directly with an Ethernet cable was a straightforward matter. I'd set static IPs via an dialog like the one below and I'd be ready. 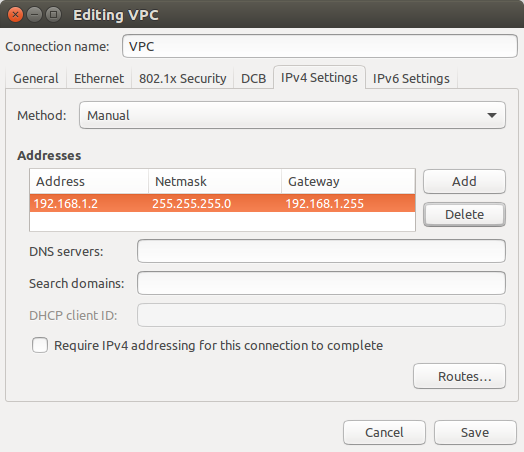 It's not as straightforward with 18.04, apparently. Before my attempt to pair the two computers with the cable, I was using a Wired connection 1 to connect to the Internet on the 18.04 machine -- I'd just plug it in and I'd be online in seconds. After the pairing attempt, not only were the two machines not seeing each other on the private network as I was expecting, but Wired connection 1 is no longer connecting to the Internet when I switch to it. 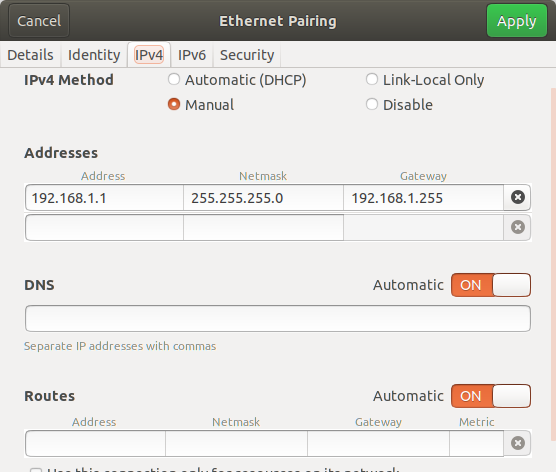 UPDATE: My intention is to connect the two computers together to arrange a fast transfer of files between them. Attempting to connect to the local network on the 18.04 machine throws an error Connection failed Activation of network connection failed.

As requested, the output of ps auxc | grep -i dns:

The output of ls -al /etc/resolv.conf:

And the output of cat /etc/resolv.conf:

Brief outline for an alternate way to accomplish file transfers, without cable and connection profile changes, and more...

note: you may have to install dnsmasq-base in 18.04 to get this all to work

Not the answer you're looking for? Browse other questions tagged networking 18.04 network-manager ethernet or ask your own question.

8
How to connect two ubuntu computers with ethernet cable

1
Problem connecting to wirless internet - computer will not boot with networking unless ethernet cable is connected
1
USB ethernet adapter: 'Cable unplugged' message while plugged in
8
How to connect two ubuntu computers with ethernet cable
0
Connecting to Ubuntu machines with direct ethernet (one Lubuntu) not working
1
Connect desktop to laptop via ethernet crossover to use laptop Wifi connection
10
How to share wired network connection in 18.04
1
Ubuntu Shows Ethernet Cable Unplugged
0
Problem with Network Ethernet connection during start-up in Ubuntu 18.04
1
Cannot connect to wired Ethernet network (problems with DHCP?)