How can Ubuntu become unresponsive when OOM without thrashing?

When I use too much RAM on my Ubuntu 18.10, the GUI freezes. It stops reacting to keyboard and mouse and there is nothing to do other than hard reset the computer.

I believed that this was because the system has swapped out the Gnome binaries to disk and that, eventually, they would be swapped back. But this never happened in the observed timeframe (20 minutes or so).

I tried to solve the problem by disabling swapping (I prefer to lose unsaved work to losing unsaved work and having to restart the PC) and by instructing the OOM killer to kill whichever process has triggered the OOM situation according to this answer. However, this did not help. I tried to use a lot of memory by opening too many browser tabs and the only thing that happened was that the system became unresponsive again.

How is this possible? What other mechanism than thrashing could be involved? (genuine engineering question, not a rant)

I monitored the system stats during this experiment and it seems that the CPU was not running under 100% load, so it was not the computational constraint. Furthermore it seems that the GUI froze before I had the chance to open enough tabs to trigger the OOM killer. 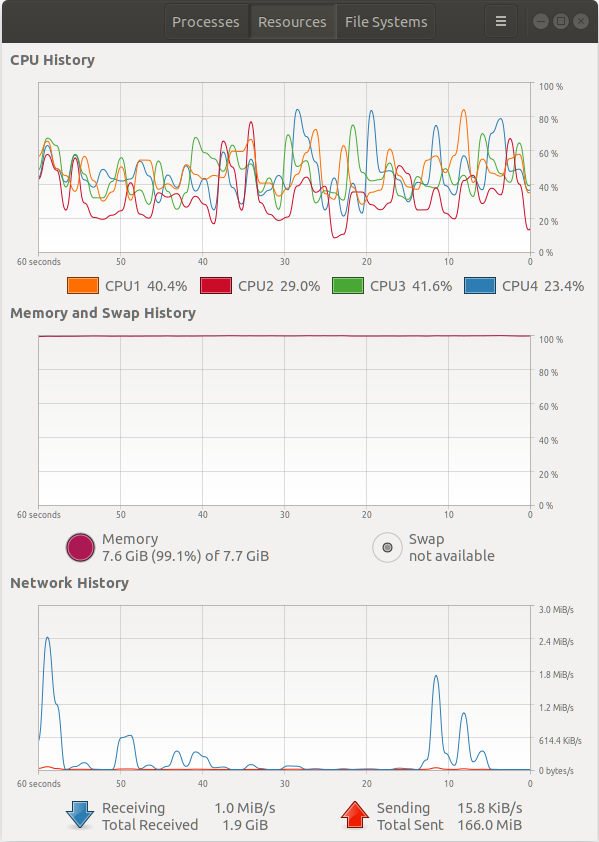 The best theory that I can come up with is that the GUI libraries are using some sort of memory allocator that allows them to continue functioning even with very little memory, either by using some alternative swapping mechanism or by some CPU intensive heap rearrangements. Otherwise I have no clue.

Is there any better explanation for this behavior? Or a solution even?

It is worth to try to use some improved version of OOM-killer. Like earlyoom or nohang. There are more alternatives described on their websites.

These userspace apps can react much faster than regular kernel OOM-killer.

nohang maintainer on github is very actively responding to issues in case you will have any.

This linux podcast provides some audio introduction on the topic.

Note: You really need to add more RAM, but we'll try this...

Every system needs a swap partition or /swapfile.

Note: Incorrect use of the dd command can cause data loss. Suggest copy/paste.

Assure this line is in /etc/fstab...

Search for an existing vm.swappiness= entry...

Save your edits and quit gedit

12
How to prevent my system from becoming unresponsive when thrashing (out of RAM)?
2
Why do programs (including Xorg) close when out of RAM but Swap is near empty?
1
How do you deal with unresponsive browser scripts?
1
Ubuntu 18.04 OOM Killer keeps getting invoked, but I can't find any sign of out of memory
2
System becomes completely unresponsive minutes after starting 7z - how to work around or fix this?
0
will unmapped memory data be placed in swap files