Get rid of a ghost printer

Under System -> Administration -> Printers, the window shows a printer that no longer exists: 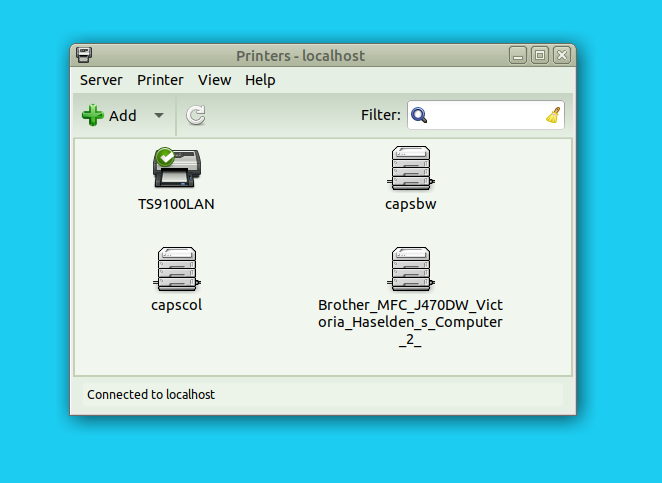 My wife used to have Brother J470DW printer (physically attached) hanging off her Mac Desktop. She got rid of that computer and acquired a new one. I never installed the Brother printer under printers on my laptop --- as far as I could tell this would have been no use, since, as far as I could tell, it was not WiFi connected. But somehow my laptop "knew about it". But now it's gone and my laptop still knows about it!

I've repeatedly tried to delete it --- the icon disappears momentarily and then immediately re-appears. I's an unimportant nuisance, but it's irritating.

Is there any way that I can get rid of the thing?

(The printer "TS9100LAN" that shows up in the screenshot is my wife's new printer which is WiFi connected, rather than cable connected, and after considerable travail I managed to obtain and install a printer driver for it, and can now print to it.)

First, you need to remove the unwanted printers.

and edit this line

to none so that it reads:

Then save the file and reboot.

you will have to turn off auto-discovered printers. for that, you will need to reconfigure the settings. and after that, it won't show any additional printer except the printers you have added manually.

now restart the service by

that's all. your problem will be solved.

Not the answer you're looking for? Browse other questions tagged printing or ask your own question.

21
How do I get rid of a ghost printer in Gnome?

1
How do I get a Brother MFC 230c Printer working?
0
How do I get a Samsung SCX 5737FW printer working?
21
How do I get rid of a ghost printer in Gnome?
1
Printer Samsung ML-2165W: Installed but it won't print
0
ghost printer entry in printer dialogue after frozen installation process
1
Get (last) CUPS printer error programmatically
0
kubuntu samsung uld driver does not print correctly on samsung clp 320 printer: white page with text “spl-c error please use proper driver …”
3
Why are the top and bottom of print-outs cut off on Ubuntu 18.04.3 LTS with Brother MFC-J470DW?