In my computer I need keyboard language support for:

Hence I installed iBus and anthy:

And into language settings I have set the iBus Input option: 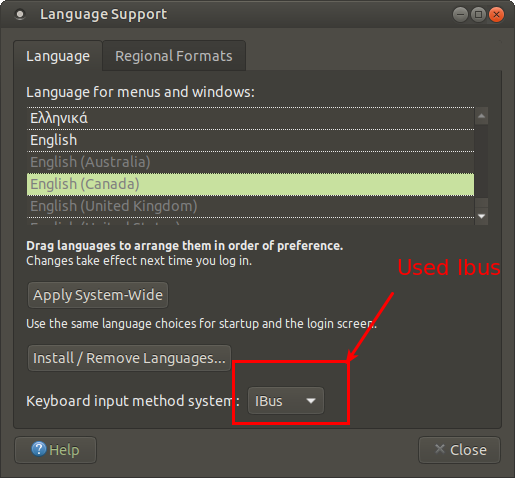 And not due to double indicators in my system for input language I want to somehow "disable" the xkb/xinput/whatever powered one and use the iBus as universal language input for Greek, English and Japaneese(anthy) changing with ALT+Shift keyboard stroke.

Furthermore in my desktop I have 2 indicators one for iBus and one for xmodmap:

When I switch between 2 language inputs via Alt+Shift the non iBus one indicates the input language.

I tried temporary to disable xmodmap language input with:

Also In this case one temporary "disabled" the xkbmap I get these settings:

Thus as far as I understood the xmodmap overrides the iBus and I want to make it stop to do that and let iBus handle any language input. So in order to do that I need to completely disable the options in setxkbmap so how I can do that?

Not the answer you're looking for? Browse other questions tagged 18.04 keyboard-layout ubuntu-mate ibus or ask your own question.

0
cannot find a way to switch to telex text input style in ibus-unikey (for Vietnamese language)
6
Troubleshooting layout switching in Ubuntu Studio 15.04
1
I'm not able to change keyboard input
1
Keyboard layout for shortcuts stays national for some app on Ubuntu 18.04 gnome shell
2
Adding a second keyboard layout in Kubuntu 18.04
5
Keyboard layout stuck into CZ_german no english layout after update, restore into original EN_us and EL_Gr ones