In Ubuntu 18.04.2, I would like to show a consistent background image from the start of Grub2 to the appearance of the GDM login screen.

I have customized the ubuntu-logo plymouth theme to show the background image that I would like. All the necessary procedures as described by @Jake were done, and tested. Even the test procedure described by @Jake were performed. However, the plymouth theme just does not appear. Between the Grub2 and GDM login stage, I still encounter 6-7 seconds of black screen each time the system boots up.

What can I do to discover the issue(s) for this black screen? How should I fix this missing splash screen issue.? The system uses NVidea driver version:418.56.

Remark: The system is able to boot up and login at the GDM login screen.

I introduced the following amendments to try to resolve my issue:

During my many reboots checks, the good news is that I am able now able to see the plymouth splash the I had implemented. However, the bad news is that the plymouth splash does not last all the way till the GDM login screen appears; the splash is still proceeded by first a black text screen(see below images on 1st reboot and subsequents reboots) and then followed by a complete black screen, before the GDM login screen appears. The appears for about 5 to 10 secs. Also, after I had made the amendments that I had described above, on the first reboot, the plymouth splash appeared the longest. On my 2nd and subsequent reboots, the appearance of the splash was shortened. Strange... 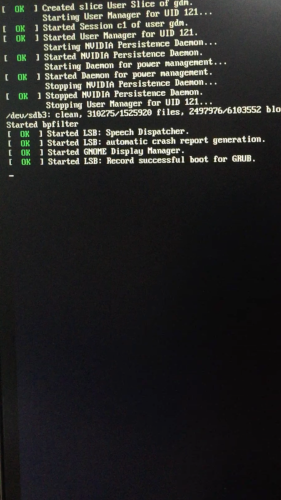 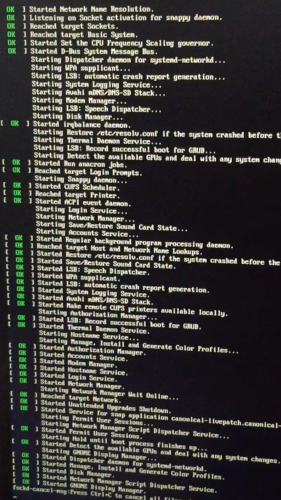 Question: How can I avoid/overcome these black text screen and black blank screen that appears between the plymouth-splash and gdm-login stages? Is there another stage in the boot sequeence to implement a background image that I have not attended to? Thus far, I only know of the the need to put a background image in the grub, plymouth and gdm stages, and I have perform these setups.

I like to share here my findings from using GRUB_GFXPAYLOAD_LINUX="keep" and when I instructed Grub2 to process the linux kernel with these values: ro, ro splash, ro nomodeset, ro quiet, ro quiet splash, ro quiet splash, $vt_handoff, and ro splash $vt_handoff. For each case, I recorded the boot events from the moment after I had pressed F10 while at the Grubmenu->pressed-key-"e"-environment up till the appearance of the GDM-login screen, and I conducted the same video measurement thrice. Resolution of the reported timings is 1 second. The reported timings is constrained by Seagate's Firecuda internal 2.5" SATA3 HDD performance and would not apply to OS installed on a SSD.

A summary of my measurements are given here. 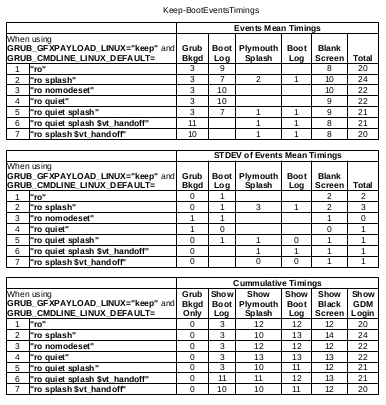 A chart of their cumulative timings is shown below. Note that when the curve between two events is horizontal, it means that the event on the left did not occur. 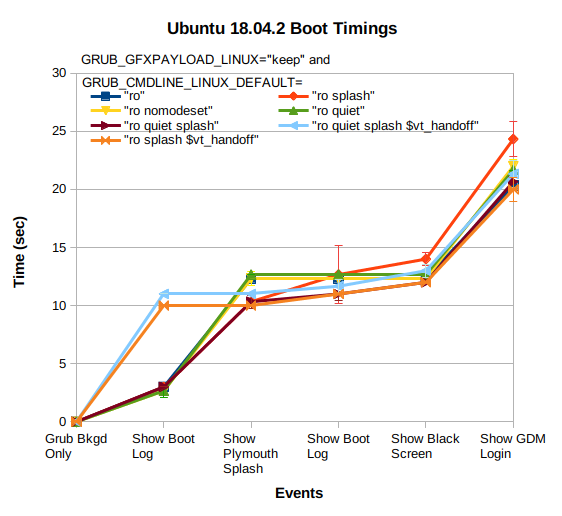 My setup presently is still plagued by 2 phenomenon.

I suspect these two issues have something to do with the communication between the Nvidia driver and Grub, or timing issues when transitioning between various virtual screens. Can someone who is knowledgeable of these phenomenons advice me on how to overcome/investigate them? Thank you.

Adding the kernel parameter loglevel=3 resolved the appearance of the bootlog for me. You might need to decrease the value of loglevel depending on the exact problem you're encountering. This won't do anything for a blank screen, alas.

Not the answer you're looking for? Browse other questions tagged boot grub2 nvidia gdm plymouth or ask your own question.

1
When I boot up the computer normally, gdm won't work
4
How do I enable the GRUB splash screen in Xubuntu 12.10?
0
How to show boot text instead of the splash or blank screen on Ubuntu/Kubuntu 18.04?
1
Removing/hiding all boot screens
0
Change splash/login screen in Ubuntu 20.10